For some musicians, a band name that describes their political aspirations takes precedent over commerciality. And so in 1984 Sascha Konietsko’s “performance art project” became Kein Mehrheit Für Die Mitleid, quickly abbreviated to KMFDM.

The uncertain direction of the early albums – a milky mix of industrial, dance, electro and heavy metal – got roundly slammed. It was not until their fifth full length release Naive, that the public and the critics sat up and took notice, with the latter nodding their heads sagely, claiming to have seen the band’s potential all along. By this point, the Konietsko collective – including, by now, vocalist, Lucia Cifarelli – had got plenty of industrial grit under their musical fingernails and had turned the heavy metal guitars up to eleven. Combine that with a loud and relentless rhythmic pulse, and the band’s fiercely political lyrics had a delivery system without equal.

The title track and ‘Animal Out’, both from the 2013 album, Kunst (Art), open the door on this bunch of re-imagined and remixed tracks from the band’s 19 album, 32 year career. Heavy on samples, synths and weighty bass riffs, the songs’ melodic core reinforces the notion that Konietsko has always been wise to the value of hypnotically repetitive musical motifs and high calibre, pop quality tunes. It’s a sleight of hand he has skilfully employed time and time again, to great success. In fact, by simplifying the production complexity, Victor Love’s strungout, trancey remix of ‘Krank’ (WTF 2011)and Marco Trentacoste’s cold, bleak remix of ‘Amnesia’ (WTF 2011), underline Konietsko’s original musicality, until, inevitably, the peace is shattered by the implacable sounds of sonic turbulence.

In the beginning, the band got compared to Rammstein, Megaherz and others grouped under the “NDH” (Neue Deutsch Harte) banner, a media invention – lazy journalistic shorthand for anything vaguely, techno, dancey, metallic, thrashy etc etc. But there was some truth there, in that like those bands, KMFDM were creating a narrative on what they thought was important. As much a different emphasis of that narrative as anything else, from 1993’s Angst, ‘Light’s thinly veiled tilt at corporate power and, from 1996’s Xtort, ‘Son Of Gun’s withering take down of US gun culture confirm KMFDM’s willingness to tackle the big issues with full burn ferocity.

Cifarelli and Konietsko chose these tracks, claiming that they are the “ideal playlist for a live set”. Roll on… 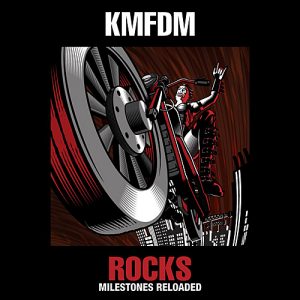