Circumnavigating the globe has become the stock in trade for the septuagenarian duo of Paul Stanley and Gene Simmons as they continue to steer the rock juggernaut that is Kiss across the continents one more time. As the band head towards the final chapter (again) on their “End Of The Road” World tour expected to finally come to a halt sometime in early 2023 (we’ll believe it when we see it) the second release in the bands official bootleg series hits the web stores with Off The Soundboard: Live In Virginia Beach. Recorded at the 20,000 seat Virginia Beach Amphitheatre on July 25th 2004 as part of the “Rock The Nation” tour which was the first tour to feature the latest line-up still going strong today. Joining founder members Stanley on guitar and vocals and Simmons on bass and vocals are Tommy Thayer on guitar and Eric Singer on drums.

As with the previous Tokyo 2001 release the sound quality on this release starts a little shaky but within the first couple of tracks the mix improves to a reasonable bootleg quality although the crowd noise always stays well down in the mix. All the regulars are here ‘Love Gun’, ‘Deuce’, ‘Detroit Rock City’, ‘100,000 Years’, Shout It Out Loud’ and the inevitable ever present closer ‘Rock and Roll All Nite’. When you have a song this good why finish with anything else? Along with relatively newer tracks which became staples over the years… ‘Psycho Circus’ which is the newest track in the set but is brilliant live, ‘Lick It Up’, ‘I Love It Loud’ and disco classic ‘I Was Made For Loving You’ with it’s somewhat strained soprano backing vocals. This recording shows what a solid line-up the Thayer/Singer configuration was even in these early days. Singer had joined the band officially way back in 1991 only being ousted when the original line-up reconvened in 1996 for the Alive/Worldwide tour. Thayer despite not becoming a full-time member until Ace Frehley’s departure in 2002 had work with the band in various rolls (including as a handyman) since 1994 so it is no wonder they are musically a very tight unit. Certainly, slicker than Frehley and Criss but that is not necessarily a good thing, but this quality pathed the way for the following 18 year and counting. Singer is powerful and solid throughout and Thayer’s technique is outstanding from his ‘Love Gun’ solo onwards. Okay as well as the afore mentioned ‘I Was Made For Loving You’ the vocal performance on ‘Tears Are Falling’ is a little ropey and many fans will miss ‘Shock Me’ following the departure of the Space Ace as well as the Simmons show piece ‘God Of Thunder’ but what you get in place are some rarer moments which more than make up (see what I did there) for these weaknesses/omissions like ‘Unholy’ (many may not agree but I love it), ‘God Gave Rock ‘N’ Roll To You II’ (even more may not agree), ‘Christine Sixteen’ and ‘War Machine’. As always, the band pull out all of the stops to deliver all of the pomp, glamour, glitz and pyrotechnics you would expect from this planet beating shock rock quartet.

If I’m perfectly honest most people will be better off with a copy of the 2005 Rock The Nation Live! DVD as a document of this tour. Recorded at this same concert as well as Washington, DC the night before it is much cleaner with has an improved audience sound and only misses ‘Psycho Circus’ and ‘King Of The Night Time World’ but adds ‘Love Her All I Can’ and the ever popular ‘Parasite’. Having said that the Off The Soundboard series is looking like building into an impressive document of the hottest band in the world’s utterly unique career. Available on double CD, triple vinyl or digital downloads this is sure to keep the Kiss Army more than happy. 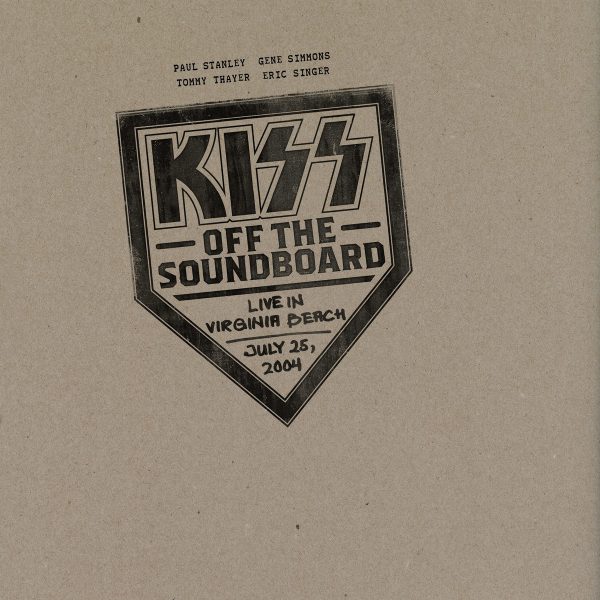