A gig with real live music! For this writer the first such experience in some four hundred and ninety six days (last time out being The Mission at the end of February 2020 in case you were wondering). Of course this wasn’t football but music so the venue was “socially distanced”, not that this minor inconvenience made the evening anything less than a triumph. So a big thumbs up to all involved; the staff at The Station (a great little venue that will hopefully soon be packed out again), the team at Angel Promotions, the sold out audience for turning up and of course the artists themselves. 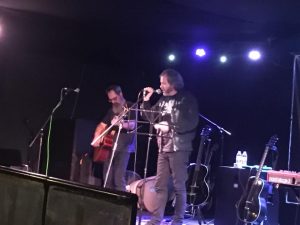 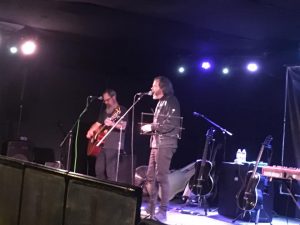 Headsticks, or more accurately 50 per cent of them, kicked off the evening with forty odd minutes of their punked up folk anthems. Performing as a duo, the rhythm section were left at home and so it was down to vocalist Andrew Tranter and guitarist Stephen Dunn to deliver the Headsticks message. They were rewarded with a terrific reception from the crowd, most of who like myself were likely experiencing the band for the first time. Andrew sang his heart out on socially-aware, philosophical lyrics that seem to perfectly sum up where we are right now and prove very effective when set against the backdrop of Stephen’s stark acoustic guitar. New album C.O.W. sounds like it is a winner with both ‘Tyger, Tyger’ and ‘This Ain’t Politics’ being mid-set highlights. Headsticks have a number of festivals slots and club shows coming up in the next few months; see the full list at www.headsticks.co.uk 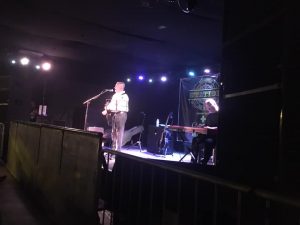 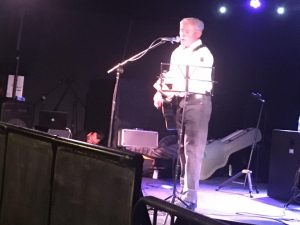 Kirk Brandon has been performing ‘Akoustik’ shows for a number of years now alongside his regular touring duties under both the Spear of Destiny and Theatre of Hate banners. The beauty of these intimate gigs is that Brandon is able to drop the needle anywhere from his vast back catalogue and is not obliged to include any particular song in the set. So tonight there is no ‘Never Take Me Alive’ but ‘Judas’, ‘These Days Are Gone’ and ‘Monday Girl’, all of which mesmerise and delight. This stripped back format also allows the audience to appreciate his voice; which has notably lost none of its passion or power. Brandon also proves to be an engaging storyteller when discussing the inspiration for ‘Brighton’ and future shows of both chat and music would no doubt be welcome. Pantomime villain Steve Allan-Jones joins in on keyboards for the last few numbers; the wonderful ‘Pumpkin Man’ and ‘So in Love with You’ rounding off what was a superb set.

Tonight felt like a private gathering of friends old and new and after that has gone before it was refreshing to be able to get back to experiencing terrific music in a warm and welcoming environment. Now, at long last, it is time to look forwards and support everyone involved in the live music scene as it begins to rebuild. Here at Midlands Rocks we look forward to seeing you at a show in the very near future.