The blues scene is in good shape at the moment. We have a strong cast of old veterans (Bonamassa, Trout et al) and a fantastic batch of younger artists (Gary Clarke Jr., Jared James Nicholls, Samantha Fish). But, that being said, you can’t have too much of a good thing. A fresh new intake of talent can never be a bad thing.

Step forward King Solomon Hicks. 24 years old. By 13 (13!!) he was playing 4 nights a week at the legendary Cotton Club as the lead guitarist in their 17-piece house band. That’s quite some achievement. By his own admission, he didn’t want to be the fastest – he just wanted to be able to play anything, with anyone. To that end he has played with, well, everyone – from the aforementioned Bonamassa to Tony Bennett.

And now the time is right for ‘Harlem’, his debut album. A cursory listen to the above track lets you know what to expect – slick, professional traditional blues played by someone who knows exactly what they’re doing. There’s a lot of that on this album. Hints of Robert Cray and BB King. The guitar playing is fluid and dextrous. Note perfect but not too cocky. Confident, assured, that’s what this is.

But that’s not the whole story. There’s more, lots more. This album is autobiographical, a musical map of the titular Harlem – a neighbourhood almost as seeped in musical history as New Orleans or Nashville. To that end we are treated to a dazzling variety of stylings, all within a bluesy framework.

There is a healthy dose of grit. ‘Every Day I Sing The Blues’ has a nice distorted nod to ‘Crossroads’, while ‘Headed Back To Memphis’ is a cranked up twelve bar blues, aided and abetted by some Stonesy guitar. ‘It’s Alright’ sees Hicks adding some FX to a killer groove already laced with wah wah.

There are a brace of fine instrumentals. Damn, if this kid don’t know his stuff. Hicks plays beyond his years, plugged in to the motherlode. Blues history courses through his fingers. It’s all effortlessly classy. There are multiple, subtle nods to blues greats. We have lovely, double tracked ‘Beano’ album style workouts and righteous funk rock jams. There is some blissful guitar/sax interplay and Hicks is constantly doing unexpected (and very, very clever) things within traditional frameworks.

We end with a glorious reading of Sonny Boy Williamson’s ‘Help Me’. It’s an object lesson in how to play a slow blues, there’s not a hair/foot/finger out of place, finishing, as it does, on an immaculate tempo change and solo.

This is a no-brainer for blues fans. There are no obvious fireworks. No shredding. But there is approximately 40 minutes of utterly classy straight up blues music. It’s an album that impresses, that keeps getting better. An 11 song salute to his musical roots by a seriously gifted and assured writer, player and interpreter. Hicks is most definitely a name to watch and it will be fascinating to see what comes next. Will it be more of the same (which would be more than ok) or, having paid his dues, will he launch into areas as yet unknown? Who knows, either way he’ll be jamming with Eric at the Albert Hall in no time. 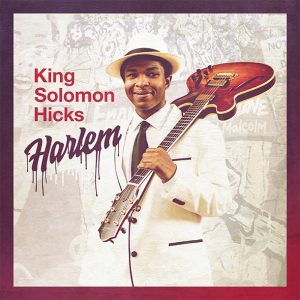