Making a wholesome contribution to the golden age of doom...

Absolution is the full length debut from Denver doom dogs Khemmis. There’s a lot to like about this release which begins with a thundering bassline on opening track ‘Torn Asunder’. However, it then starts to move and twist in some different ways rather than just follow the morose melancholy explored by a lot of doom acts. This is not what you could conveniently file under ‘funeral doom’ – in fact many of the sweeping rhythms would have you jumping off the mortuary slab rather than laying cold upon it. And Phil Pendergast’s vocals are higher pitched, friendly and fulsome. Sure there are some beefy hardcore chants from Ben Hutcherson which surface intermittently to provide a neat juxtaposition but it’s the higher soaring melodies delivered by Pendergast that really seal the deal with Khemmis.

Second song ‘Ash, Cinder, Smoke’ has an almost Pallbearer-feel about it with dynamic riffage executed alongside Pendergast’s clean harmonic vocals topped up by the occasional growl from sparring partner Hutcherson. On ‘Serpentine’ there’s a scintillating solo that whips up frothier than an award winning barista’s cappuccino. It’s accomplished stuff from four young guys intent on carving out their own piece of Colorado stone. I guess it’s unlikely that this tome was written in homage of Hyde Park’s famous lake but nevertheless the end result is no less engaging than sitting watching the ducks cruise by on a sun-baked afternoon at London’s premier aquatic attraction.

The kaleidoscope colours created by Khemmis are far removed from some of the darker doom acts although they show they can lose some of the softer shades on ‘Antediluvian’. For sheer doom mongering menace this dinosaur will exert plenty of pressure on your neck and shoulders with its thumping introduction before a Hendrix like riff makes its welcome presence felt. There’s an ice breaking riff that cuts through the fuzz with elegance and precision while this pounding piece also sees even more use made of Hutcherson’s angry interventions.

On ‘Burden of Sin’ the tempo is again well crafted, with greater use of solos that play tricks with your senses as they joyously ebb and flow like the waves of the sea. Closing number ‘The Bereaved’ is a near 10-minute masterpiece constructed with love and enthusiasm and the dedication to detail of a fine wine connoisseur. It’s a sprawling, swirling classic that suffocates you with its great sweeping riffs, melodic rhythms and Pendergast’s harmonic vocals. As curtain closers go this is mesmerising as it expunges a warm glow in spite of the obvious coldness and finality of the title.

The state of Colarado has recently reformed and relaxed its drug laws, specifically around the use of marijuana. I would not be at all surprised if the dulcet delivery of these Denver desperadoes provided the soothing soundscape when the votes were cast on that particular piece of legislation. If this is a golden age of doom, as so many of us believe it to be, then Khemmis can be included among those protagonists making a wholesome contribution to the downtuned cause. 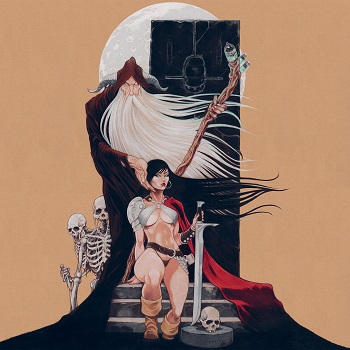