Shepherd’s regular touring band is augmented by a horn section that adds class and power to an already killer live band. And they waste no time, thumping into an energised ‘Woman Like You’ – big horns, uber Southern vibes and a fine Stevie Ray Vaughan style solo. Ye, and indeed, haw. We’re off.

And the pace has pretty much been set, the songs chosen for this show have an unstoppable momentum, they’re ruthlessly put together to get a large venue full of people rocking. ‘I Want You’, while possessed of more beefy riffage, starts to stretch out, give the bend room to shine individually – from Hammond to sax to trumpet and back to pyrotechnic guitar, there’s simply no letting up. Songs begin to follow a format – a big riff, dropping out into a groove or band solos, ending with a seriously extended Shepherd firework display.

James Elmore’s ‘Talk To Me Baby’ benefits hugely from the horns, launching from a classic barroom blues into a soulful Blues Brothers ‘Sweet Home Chicago’ knees up. We’re then off into the first of the 10+ minute excursions. ‘Heat Of The Sun’ is an, ahem, scorcher – a muscular, brooding slow blues with some epically held notes. It runs a gamut of styles, there’s even some jazz in there, and it just keeps getting impossible harder, faster, louder. This, ladies and gents, is a road-honed band firing on all cylinders.

Again, ‘Shame Shame Shame’ (from his debut album) is another excuse for the band to take veeeery long solos. As good as they are, once you’re about an hour into this show, they begin to get a tad too long, a touch samey. This is a good, hugely proficient band, but you’ve heard all of these solos before, and they just keep getting longer, songs, unfortunately, are becoming little more than excuses, hooks to hang more solo’s on.

And on it goes. ‘Turn To  Stone’ is dialled up to 11, Slim Harpo’s classic ‘King Bee’ is given a country rock edge and then we’re into that staple of all blues rock shredders – ‘Voodoo Child’. Now don’t get me wrong, it’s good, very good (and looooong), but who hasn’t heard this several thousand times by several thousand guitar heroes. Come on six-stringers, it’s a great showcase tune but could we not go down a road a smidge less travelled?

Shepherd pretty much follows the Stevie Ray Vaughan blueprint – it goes high, it drops out into a jam and then takes off again. It does everything you’d expect of a ‘Voodoo Child’, hell, it even drops in a snippet of Hendrix’s ‘Power Of Soul’, plus it’s interesting to hear it with added horns. But…it’s a tad safe for a guitarist as supremely confident as Shepherd. Compare and contrast with the recently (last week) released live version from the originator himself from the ‘Live In Maui’ album – Hendrix is on fire, detonating the song from within, pulling it inside out, bringing jaw-dropping levels of noise, distortion and finesse – it’s almost out of control and , regardless of how many times he played it, he always brought something new.

I digress. ‘Straight To You’ is a good live album, plus you get a bonus DVD of the whole show so, y’know, result. But it just needed a certain something, an extra glimmer of inspiration, a touch of variety and restraint, a song or two where they thought collectively outside of the box, and it could have been great. We know that these guys can play and we know it’s blues rock and shredding comes with the territory but sometimes, just sometimes, less is more. Recommended nevertheless.

Released by Provogue Records on 27 November 2020 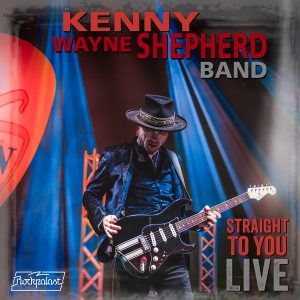