A posthumous release for the former Uriah Heep keyboard player and chief songwriter’s final album. One using words created by Russian poet Vladimir Emelin; a long-time fan who he met by chance at an airport.

True, Hensley has tinkered with those words, partly for literal translation, partly to fit the song structures, but there appear consistent themes at work throughout. A Russian bleakness is present, but optimism too – Certainly that good-will-conquer all ethos was one Hensley’s own lyrics tended to opt for, indeed back in the day his harshest critics compared them to lines within a Hallmark greeting card.

Such peace and love worthiness often ran in dichotomy to the later public perception of the man, as he sneered public at Uriah Heep’s continuation beyond his involvement. All that despite finding God. But such bitchiness too faded, as he re-joined them for special anniversary performances and box collection release promotions.

It would seem, that just before he died, Ken Hensley truly found himself at peace with the world. How else could we believe the man perceived as something of a control freak in his heyday, could graciously agree to compose music for a whole album of another man’s music.

So, what of that music?  The core group performing on all tracks alongside Hensley on lead vocals, guitar and keyboards, is one from Izzy Cueto on additional guitars, more than able bass playing from Moises Cerezo, and drums/percussion courtesy of Tommy Lopez. To that we can add a small group acting as choir on certain tracks, and apparently a string section.

Nothing belts out hard and fast like the classic ‘Easy Livin’’ and once it gets going there’s a preponderance of ballads it’s true, but, overall, it works. Certainly, it fairs better as an album than his  Trouble album that I reviewed for The Midlands Rocks a few years back.

With a ‘1, 2, 3” countdown from the man, ‘Lost (My Guardian)’ graces the lugholes with a bass thumping mid-paced rocker. There’s a 12-bar blues bias in the chord turnaround and the enunciated foghorn  vocal approach. While it’s uncertain if that guardian’s God, some lesser guru or one’s own state of mind it comes across well. There’s nothing new here but it’s played with a sense of conviction. A shift in tempo near the end, leading to a soaring slide solo accompanied by “La, la, la” harmonies reminding us of his Heep lineage.

Nowhere near as much as ‘Right Here Right Now’ however – This repurposes  that band’s ‘The Hanging Tree’ from their Firefly album, but that’s acknowledged in the Henry Jack Williams’ co-credit. That original featured John Lawton on vocals, and while it has been said that Hensley’s own voice was a reedy approximation to the band’s original singer David Bryon, here on this album it’s more deeply nasal inflected.

More so, something I’ve noticed with a number of older rock singers, caught live and on camera; age results in a slackening of the jaw causing the overall timbre of their voices to be affected, sometimes giving a more wavering nuance, on occasion in self-correcting resulting in a clearer diction. Here, Hensley is in tune and effective in conveying the various moods and concerns of each song, but in truth you’re not going to be listening to his voice as an instrument here.

‘The Cold Sacrifice’ with its emotive guitar burn lead-in promises similar musicality to that heard on the opening tracks bit soon becomes a Mediterranean flavoured rumbling travelogue of a love gone sour. Rather effective in feel, a short guitar solo uncoils briefly near the end and wouldn’t have been out of place extending a few bars longer.

‘The Silent Scream’ opens a little like Heep’s ‘Women Weep In Silence’ before moving into big orchestrated ballad production, of the kind you might find on the radio back in the early sixties. Piano and guitar solo entertain as ballads continue with ‘Cover Girl’ and ‘Light The Fire (In My Heart)’ where twin guitars serenade and Hensley’s voice take a world weary tone though lyrically it could be one Emelin wrote with Hensley himself in mind.

There’s the slight uneasy feeling that this cache of ballads could have been hits for Englebert Humperdinck as much as Scott Walker back in the mists of time. ‘Stand (Chase The Beast Away)’ begins to move us away from such considerations, evoking more folk in its Euro-friendly harmonies – Another song that musically offsets its more serious subject matter, that though never stated implies either the covid pandemic or some political stance taken.

To be frank, I hear little difference between the two versions of ‘The Darkest Hour’ offered, the former possibly more strident and longer. Hammond organ and guitar give way to piano, then a piece where  the rhythm section make themselves. Less oblique lyrically, it’s about coping with a child dying, and hymn like in parts it works.

An expected happy surprise is ‘Suddenly’ where a gentle proglike tune oozes hauntingly forth before a more urgent tempo ensues, with a guitar lighting the way. It shifts through a series of semi-classical, rock, prog and balladeering moments – If we were were receive a soul-soaring guitar solo at the end, I’d call it a bit of an epic this one, but it refrains from doing that that; resolving in more thoughtful reflection. Were we to be dramatic, we might consider this Ken Hensley himself coming to terms and being at peace with himself, with both versions of The Darkest Hour’ bookending it, and serving as reminder that he passed away before My Book of Answers?  was released.

It’s not perfect, not by a stretch, but there’s a good brace of songs contained within the collection. It’s a worthy and respectable album for Hensley’s career to end on, though I’m sure his family and many fans wish it weren’t so.  It’s a record of the old school variety, to be played and gently allowed to soak into the consciousness, where deeper rewards may be found by the listener. 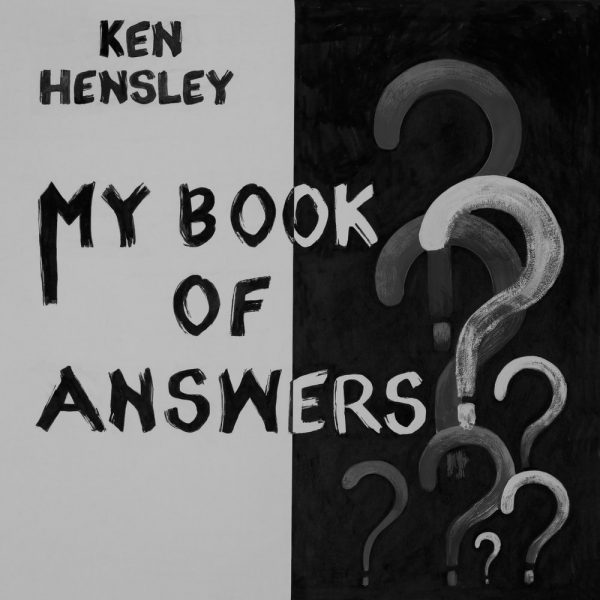