An AOR one night stand…

Keeling has lived his professional life in exalted company. Amongst others, John Sykes and Blue Murder, Michael Schenker, John Norum, Don Dokken, and of course, Baton Rouge, in 1986, where it all began. Mind Radio is his second true solo album. His first, Giving Sight To The Eye (2005), took us on a fascinating journey through Keeling’s catholic taste in rock music, occasionally shunting us down bohemian sidings, but for the most part just letting us enjoy his exploration of pop, pomp and classic hard rock. This release, Mind Radio, mines a narrower, much more recognisable seam, full of familiar hard rock riffs and tropes, and consequently loses something of Keeling’s unique character en route.

There’s an agenda of course. It’s released on Frontiers Records. The Indiana Jones of Record labels, constantly searching for the Holy Grail of AOR… which, for the label, would be an authentic recreation of 1989, where bands like Baton Rouge ruled the airwaves and any kind of alternative was just a mote in Kurt’s eye. Only following orders, inhouse producer, Alesssandro DelVecchio does his usual flatpack assembly job. There’s no trace of original thinking, but it’s done with such conviction and style – and Keeling is clearly a willing participant – that its initial positive impression takes a while to fade. ‘Isolated Man’ and ‘Sunshine Over me” are much in the Stan Bush/Jimi Jamison/Rod Stewart mould. Designed for accessibility, they succeed at a superficial level, creating the occasional thrill without ever engaging emotionally. An AOR one night stand, if you will.

Rising above the ordinary are the gloriously simple ‘Written In Fire’, penned by songwriting greats, Jack Ponti and Lance Bullen; ‘No Man’s Land’, a gutsy little song which never fully delivers on the huge promise of its intro, and ‘Frozen In Time’, a Robert Sall song that maybe just missed the cut for Work Of Art’s last album. On these, and perhaps too, ‘Ride The Storm’, Keeling’s warm, granular voice still casts shivers. The power of its blend of grit and sophistication remains undiminished more than a quarter century on from its beginnings. Why these songs are packed into the back end of the album is a mystery. 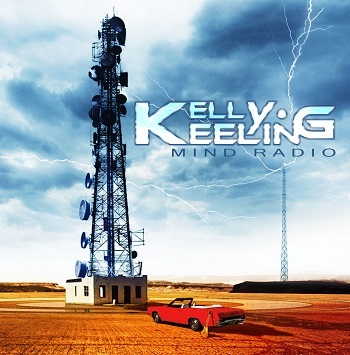