Guitar virtuoso Keef Hartley’s career began as replacement for Ringo Starr as drummer for Rory Storm and the Hurricanes after Ringo had departed for The Beatles. A stint in The Artwoods, followed, before finding a home in John Mayall’s Bluesbreakers. Such was the wealth of Keef’s talents, he was never going to be content being a cog in someone else’s band, so in 1967 he struck out on his own with the modestly titled Keef Hartley Band. The fusion of blues, jazz and rock they peddled was so visionary it still sounds vital, and if you want to know why the band is still so highly regarded in blues circles, the answer’s right here in this lavish set, Sinnin’ For You: The Albums (1969-1973).

Introducing many themes that would reverberate throughout their career ‘Sacked’, at almost eight minutes, is not what you’d expect from an album opener. Full of hypnotic rhythms, swirling keys, and, of course, some stellar drum work, ‘Sacked’ entwines itself around the listener like poison ivy and alters the very fabric of time with a mesmeric beat. Keef’s drumming is the star of the show, and he mixes up tempos and rhythms to great effect. The great thing about this type of jazz/rock fusion is that it can veer in any direction, and ‘Born To Die’ opts for a late night blues vibe, whilst ‘Sinnin’ For You’ (from which this set takes its name) gets its head down for some serious boogie. In another change of gear, a cover of B.B. King’s ‘Think It Over’ amps up the funk and makes for an exciting closer. Bonus track ‘Leave It ‘Til The Morning’ seems a tad out of place, a lemon amongst apples, yet nothing can detract from Halfbreed’s magnetic pull.

Aided by a production that provides real depth, Halfbreed stands tall as one of the best albums to emerge from the British blues boom.

In our current age when bands take aeons to record and release albums, it never ceases to amaze me the rapidity with which groups used to fire off records, and with no discernable drop in quality either. Following it’s predecessor by a mere seven months (in which they managed to squeeze in an appearance at the Woodstock festival) The Battle Of North West Six found Keef Hartley mining a rich seam of form. If anything, the band sound more focused; gone are the extended blues workouts in favour of direct, snappier songs. In 1969 the band would appear live augmented by a brass section (under the moniker The Keef Hartley Big Band) and these additional musicians make guest spots on tracks such as ‘Me And My Woman’ and provide a warm and lustrous sound. While purists might bemoan the lack of pure blues on this album, The Battle Of North West Six revels in its own diversity and remains one of the best in Keef Hartley’s discography.

Four bonus live tracks show the extended Hartley band in all their pomp and glory, and furnishing their songs with flugelhorn, saxophone and flute. And it sounds rather good.

Released in 1970 as a new decade dawned, The Time Is Near… found The Keef Hartley Band moving further away from their blues roots and veering into choppy, uncharted waters. Eclectic would be a good word to describe this album, and it bears little relation to the sound found on Halfbreed and it’s not until the third (title) track that we’re treated to a bluesy solo. The Time Is Near… prefers to weave a rich tapestry that incorporates bossa nova, Stax, Latin jazz and the whole thing is wrapped up in a progressive rock jacket. That this record borrows so heavily from Americana should come as no surprise as much of the Keef Hartley Band aesthetic borrowed heavily from Native American culture, yet there’s still something quintessentially English about this album, an eccentricity that ensures it flows smoothly.

The Time Is Near… might not have the immediacy of Keef Hartley’s first two albums, but it’s a real grower that’ll reward repeat plays.

Following The Time Is Near… in 1971, Overdog took all the various strands of its predecessor and pulled them all together in a cohesive whole. Things get off to a funky start with ‘You Can Choose’ and rarely let up over the next 35 minutes. It’s obvious that this is a more focused Keef Hartley Band who’re all pulling in the same direction. The rate of growth and development is once again noticeable and finds the band moving further away from their blues roots and the sound contained herein is rich and luxurious and has more in common with Grand Railroad Funk rather than The Bluesbreakers. However, it’s a hard punchy sound that kept an old rocker like me interested, especially the nimble title track, and the whole record comes awash with keys which give a strong Doors-y vibe (always a good sign).

Of the six bonus cuts it’s the ‘A’ & ‘B’ sides of the ‘Roundabout’ single that really shine through and both are perfect vehicles for Hartley’s drumming.

As I alluded to earlier, the Keef Hartley Band became a whole different beast in the live environment. Supplemented by a brass section, their ranks expanded exponentially, and almost had as many legs a centipede! Recorded live at London’s famous Marquee Club, the live album, Little Big Band, was captured for prosperity and, with 18 musicians on the stage, they sound absolutely massive. Getting this many musicians to play in sync is no mean feat, and especially in a rowdy club, but this line-up had already toured continental Europe so were already well-oiled. Following in the footsteps of Overdog, this album flows in a funky way, but those prog elements are evident in the shapeshifting, 20-minute ‘Legoverture’, a song of several suites that incorporates elements of jazz, and wouldn’t sound out of place on Miles Davis’ Bitches Brew.

By the time Seventy Second Brave was unleashed at the beginning of 1972 it was all change in the Keef Hartley camp. Most notably Chris Mercer came into orbit again (Keef and Chris had played together on The Bluesbreakers 1967 album Crusade) and the band had shrunk to just 7 members. Reduced numbers has resulted in a much tighter unit, and that comes shining through in every song. Listen to the time changes on ‘Hard Pill To Swallow’ and you’ll hear a band stop and start on a dime, and a with panache that only comes from seasoned musicians. More soulful and less jazz-influenced than previous albums, the first thing to note is the production which gave the band a nice punchy sound and, with the absence of any proggy influences, makes for a direct album that still resonates strongly today.

When recording, the band would play live in the studio, and the four bonus tracks some from such sessions, and evidence what a tight unit Keef had assembled.

Lancashire Hustler, released in 1973, would be the last album under the Keef Hartley Band moniker for a quite a while. Circumstances demanded more line-up changes, and reduced numbers (now down to “just” 6 members) has resulted in a (slight) return to Keef’s roots. Make no mistake, this is predominantly a funk/soul album, but there’s elements of blues creeping back in, especially on ‘Shovel A Minor’ which features bright and shiny guitar tones that glint and glisten like Sheffield steel. While the band bore Keef’s name, there was rarely any ego involved and he was often happy to take back seat and Lancashire Hustler finds him coming to the fore, whether it be in understated style, as on ‘Australian Lady’ or bold as brass on the celebratory ‘Dance To The Music’.

Containing seven albums that span a period of four years Sinnin’ For You: The Albums (1969-1973) charts not only the development of one of the UK’s most underappreciated musicians, but also of rock music in general. If you want to know why this era of music is so special, then your answer is here.

CD2: The Battle Of Northwest Six 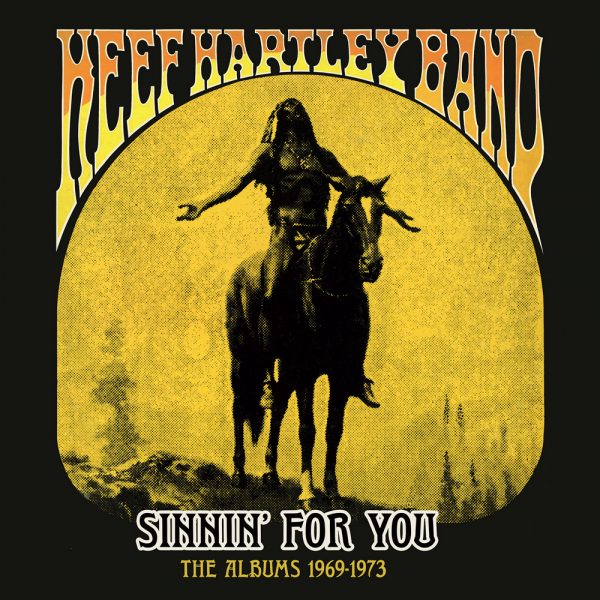