Karybdis (pronounced KA-RIB-DIS) are a London based five piece Melodic Death Metal outfit, formed in 2009 they released their debut album From The Depths in 2012 and are now back with the follow up Samsara. It has to be said there are some excellent sounding Death Metal bands coming out of the UK at the moment and these guys are up at the top line of the list, again this is a Self Release and the sound is excellent.

There’s a definitive stench of anger on the opener ‘Rorschach’, but as with any good quality DM record it’s not just screaming and wailing for the sake of it, there’s a necessary level of aggression to fit this style of music, and it’s just about spot on right the way through this album. Right from the start the twin guitar attack is a joy, with Matt and Pierre trading blows and firing blistering solos, it’s not all frenzy and their playing is so tight it’s just really excellent, in fact every unit of the band is and they work off each other . Vocally Rich has enough variance between his guttural and higher register screaming delivery you would thing there are two different singers in the band, and it adds to the overall sound. Jay (Bass) and Mitch (Drums) form a formidable rhythym section, perhaps the cymbals sound a little thin in places, but that could just be my ear and certainly no reflection on the excellent drumming throughout.

Other album highlights include “Constellations”, “Summon The Tides” and the excellent closing track “Abscence” which just flows wonderfully along ripping at your skin as it goes, there’s an effortless feel to their music, and it just works. There’s just tonnes of passion in what they’ve laid down in the studio and this being a self released album their own blood sweat and tears have yielded amazing results. This is a really well polished album, but not overly so as to be to the detriment of the music.

The monster lead single ‘Avarice’ is just a track that bludgeons you into submission, all out action from the first note to the last. The ability to maintain that hard edge of aggression while introducing a high level of melody into the music can be lost on many artists these days and albums fall on one side of the divide or the other. Karybdis manage to achieve the correct level of balance. There’s a pretty sick video to go along with the single too.

It’s quite easy to see why this band is being talked about in larger circles and their promise is massive. This is an excellent second album and if you have yet to check these guys out do yourself a favour and do, it will be worth the effort. Already looking forward to what album number three might bring, this is killer stuff. 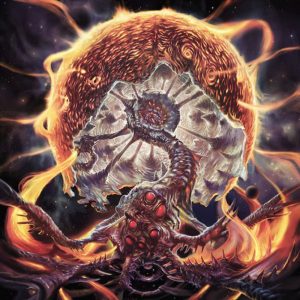