Formed in Birmingham, Alabama way back in 2014 the excellently titled Kamikaze Zombie quickly built a reputation as extreme music terrorists. Their debut album Night of the Neberus followed in 2017 and found the band effortlessly straddling several styles while their current release The Destroyer of All Things continues the good work and the 10 tracks contained within are sure to become a crossover classic.

Fusing extreme metal genres is not always an easy task, especially when those styles have stood in opposition (think Norwegian black and Florida death). To bring disparate elements together can be a risky business: fumble the ball and a band can find themselves in no man’s land with no one to play to. Thankfully Kamikaze Zombie have the right chemistry and play with a conviction that results in their influences becoming a whole new genre: horror crossover. Opening cut ‘It Watches’ is a prime example and begins in a sedate manner with some sinister heavy breathing until it’s silenced by a sledgehammer riff and some choice Charlie Manson quotes. The vocals alternate between guttural and semi-clean before a technical death metal solo (think Chuck Schuldiner) overlays the maelstrom…and all in a two minute salvo! Those who like the boundaries clearly defined will find Kamikaze Zombie a tad eclectic but others who find heaviness in different forms will revel in the albums eclectic nature.

Featuring a circular riff that swings like a wrecking ball next cut ‘Prometheus’ continues in a similar frenetic vein as blast beats nestle betwixt breakdowns as the sonic shifts keep things interesting. Mass murderers and the like have always been perfect fodder for bands like Kamikaze Zombie and here vocalist (and guitarist) Clint Spain sounds suitably brutal, like a serial killer with a knife at your throat. Clint and other six stringer Steve Carter have been mainstays in Kamikaze Zombie (and played together in The Cut Throat Conspiracy) and they share an obvious chemistry meaning the unorthodox time signatures are handled with ease and segue together seamlessly. ‘The Dark Eyes of London’ is a brutal slab of death metal while ‘M’ contains some fine black metal atmospherics.

The Destroyer of All Things is an album that’s made for the impatient: it’s a record that’s had all the fat trimmed off and 10 songs in 25 blistering minutes should tell you all you need to know and that’s primarily where the punk influence comes in. Despite all the metal inflections Kamikaze Zombie remind me of Hampshire hardcore heavyweights Six Ft. Ditch, so much so that the Zombie have used many of the same horror film samples that SFD employed on Unlicensed Cemetery.I’m sure there’s no nefarious copycatting but it does illustrate that they share a similar aesthetic. ‘Devil’s Night’, ‘Into the Nothing’ and ‘Bite of the Wolf’ follow in furious fashion with each track barely breaking the two minute barrier. However the blend of black, death and thrash metal ensures Kamikaze Zombie cram more into 120 seconds than most bands put on an entire album.

‘Beware the Moon’ brings the album to a haunting conclusion and leaves the listener hungry for more. Like unhinged alchemists Kamikaze Zombie have blended the best of extreme metal and with The Destroyer of All Things they’ve produced gold. 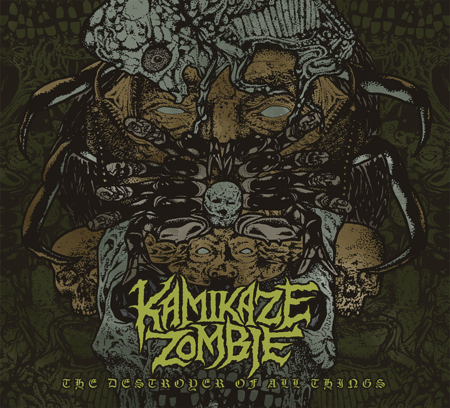