This the first solo album from analytical chemist and UNICEF ambassador, Jyrki Linnankivi, aka Jyrki 69, frontman of the 69 Eyes.

How can such an upright citizen sound so sinister? And what is it with heavy metal and horror movies? Three tracks from Helsinki Vampire are already earmarked for about-to-be-released scarefests. No wonder some extremists hear the devil in the details.

Good musical theatre needs a villain of course, and your Alice Coopers, Lordis and indeed, 69 Eyes are more than happy to serve up their own larger than life frontmen. Jyrki’s heavy duty bass baritone – a rolling, threatening thundercloud of gloom – is the ideal vehicle for his self proclaimed Goth’n’Roll.

Opener, the 8 minute ‘Ad Infinitum’ has its own cinematic ambitions. For more than 4 minutes the track’s jangling electronica, punctuated by titanic drumbeats, makes patient, anticipatory progress towards, well, something. A repetitive guitar motif and an urgent percussive clatter bring it to life, but the expected climactic moments never really materialise.

‘Versailles’ and ‘Spanish Steps’ lyrics, led by a resounding piano, pick a path through murky synth washes, ratcheting up the tension till it’s as taut as a drumskin. But the narratives, bleakly reflective, never lead to the lyrical payoff that the build ups promise.

On much of the album it’s hard to escape a comparison with John Carpenter’s or Cliff (Drive) Martinez’s cool, darkly romantic yet sublimely minimalist movie soundtracks. ‘Bloodlust’ (from the movie, “Sunset Society”) and ‘Close your Eyes’ (from the movie of the same name) add a commercial sheen to this notion, making the songs that bit more accessible. Indeed, ‘Last Halloween’, (from the movie “Halloween Hell House”) is a rock’n’roll echo of the soundtrack to Carpenter’s breakout movie. Still, even on the upbeat chorus, Jyrki’s vocals still manage to sound like the closing of a creaking coffin lid.

By stripping out much of the compelling glam metal trappings of his 69 Eyes’ heritage, and replacing them with the movie soundtrack stuff, whether real or imagined, Jyrki may have put himself at a disadvantage with Helsinki Vampire. Of course, if any one or more of the three movies succeed then he will get the last laugh, scary as that might sound. 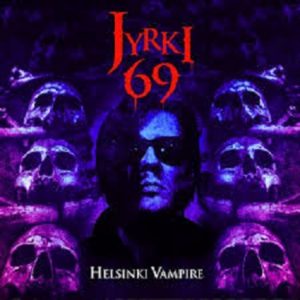