It shall forever remain a mystery as to why Juicy Lucy (like The Pink Fairies) never hit the big time. They had all the essential ingredients including a hard, bluesy sound but I guess kick ass rock bands were an oversubscribed profession in the early ‘70s and it was easy to get lost in the shuffle. However, as if to remind the record buying public of their folly BGO Records have lovingly remastered the band’s first three albums to show us exactly what we’ve been missing.

Formed from the ashes of the Misunderstood by Glenn Ross Campbell who relocated to London (via the States) and brought with him a slice of Americana that was married to the British blues and the result was the energetic Juicy Lucy. Their debut album, 1970’s eponymously titled Juicy Lucy, opened with more than a touch of southern rock and ‘Mississippi Woman’ could quite easily have originated in New Orleans but what set Juicy Lucy apart was the addition of Chris Mercer’s saxophone. Maybe not your first thought when thinking hard rock instrumentation but it works precisely because it’s not overplayed; brought to the fore at certain moments it adds another texture to an already luxuriant, fruity sound. A cover of Bo Diddley’s ‘Who Do You Love?’ was the album’s lead single and gate crashed the national charts and it’s a high octane rendition that foreshadowed the energetic pub rock of Dr. Feelgood.

Juicy Lucy was released in an age when music was strictly codified and psych, blues, funk and rock all existed as separate entities and, although it makes perfect sense now, the mixing of these genres to contemporary ears must have sounded a tad eclectic. With a touch of The Stooges ‘Just One Time’ perfectly captured that moment in time when the hippy dream turned into a LSD nightmare while Campbell’s steel guitar adds a country vibe to ‘Chicago-North Western’. A funked up version of ‘Nadine’ puts a quintessentially English slant on Chuck Berry’s rock n’ roll classic and while this may sound a musical dichotomy Juicy Lucy push it with enough confidence so it actually works. The late night Stones-ish ‘Are You Satisfied’ brings the album to a fitting conclusion while ‘Walking Down The Highway’ is added as a bonus cut. Far to be good to tucked away on the flip of their debut single it shows what a rich seam the band were mining and is testament to their being criminally overlooked.

By the time Lie Back And Enjoy It hit the streets in October 1970 Juicy Lucy had undergone some major line up changes but this second disc pretty much continues where the first left off. If anything it’s a brash, more confident band painting their sound with bold splashes of vibrant colours. New drummer Rod Coombes immediately makes his presence felt on opener ‘Thinking Of My Life’ and he brings the funky vibe, previously hiding in the shadows, to the fore. Likewise, Paul Williams stakes his claim to the mic and his whisky-croak adds an authenticity to a muscular version of Willie Dixon’s ‘Built For Comfort’. Williams was also a fine songwriter and his contribution to almost every original track gives Lie Back a more focused, unified feel than its predecessor. Guitarist Mick Moody (later of Whitesnake) was another new edition and he compliments Campbell well on a run through of Frank Zappa’s ‘Willie The Pimp’ while another strong B-side ‘I Am A Thief’ is added as a bonus cut and bolsters an already strong album.

Released in August ‘71 the provocatively titled Get A Whiff Of This found more changes in the Juicy Lucy camp (this time Jim Leverton replacing original bassist Keith Ellis) leaving just two members who released their debut barely a year before. Internal band tribulations mean you can definitely hear the musical dynamic shifting with Moody’s slide guitar overriding Campbell’s steel and Mercer’s sax, once a key component, now rather subdued and buried deep in the mix. It’s essentially the same Juicy Lucy only delivering a more straight ahead rock sound that was more in keeping with the times. There’s flashes of Lucy’s former brilliance on cuts like ‘Sunday Morning’ and ‘Big Lil’ but Get A Whiff Of This shines brightest on its cover versions. Both the Allman Brothers’ ‘Midnight Rider’ and a lively take of Bobby Darin’s ‘Harvest’ add a touch of variety and make a good album great.

For far too long Juicy Lucy have been a mere footnote in the annuls of rock but hopefully this set, lovingly and respectfully compiled by BGO Records, will elevate their status.

Lie Back And Enjoy It:

Get A Whiff Of This: 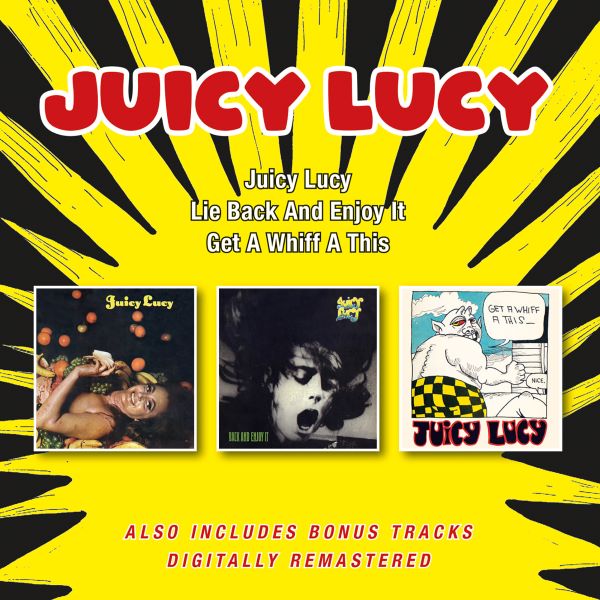