The World’s Greatest. Still They Ride…

Arguably, from the moment they regrouped and redefined their sound as a slick, commercial, radio friendly vehicle for the songs of Perry/Cain/Schon in 1978 (releasing Infinity), Journey could claim to be the de facto foundation of AOR and Melodic Rock as we know it, Jim. And build on it, they did. You know the stats, probably the most relevant being a run of seven consecutive multi-platinum albums between 1978 and 1987, all spawning many Top Forty singles and an endless number of wannabe Journeys. (the Storm got pretty close).

And no, he’s not Steve Perry, he’s Arnel Pineda, a YouTube discovery. And no, Journey will never be the same again, get over it. But do they sound good? Yes, they do. And sometimes, when you close your eyes . . .

Returning to his hometown in 2009, after landing the gig of his life, Arnel Pineda and the band – Ross Valory, Neal Schon, Jonathon Caine and Dean Castronovo – strut their not inconsiderable stuff for what seems like the entire Philippine population. They’d not long released their debut album together, Revelations, selling 800,000 copies in the process. The Pineda version of Journey therefore had its very own calling card, one that could stand shoulder to shoulder with the band’s huge back catalogue. It would be ungracious to suggest that ‘After All These Years’ and ‘Never Walk Away’ consist of spare parts from the Frontiers and Raised On Radio sessions. Suffice to say they fit neatly into the Journey cannon.

Though the leader of the band is clearly Schon – and maybe that’s why his guitar is sometimes too far up in the mix – Pineda is an integral component in the Journey stage machine, playing the crowd like an old friend, for that’s surely what it is. He captures each note with ease, though sometimes the lower registers wriggle out of his grasp. Caine and Valory are rock solid, dependable; Castronovo is immense, a precision triggered drummer with a phenomenal voice, a human metronome of pace setting rhythms and soaring harmonies.

At times it sounds a bit frantic, as if the band are hurrying to cram in all the hits before they run out of time. And maybe they were. There are 26 tracks and two and a half hours of running time.

The usual suspects – ‘Faithfully’, ‘Lights’, ‘Separate Ways’, ‘Be Good To Yourself’ and ‘Don’t Stop Believing’ and more – are nevertheless timely reminders that the band could craft a hook that sounds like a towering edifice expressed in song, and that the…ahem, journey to reach it is characteristically constructed in ways that stay long in the memory. In the live setting, there is not much that can be added to songs like these, they are what they are. And to be honest, that’s just how the fans want it. 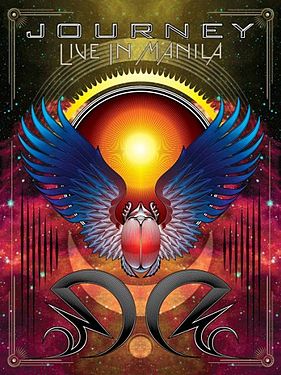