One would not be surprised that with the slow but genuine rise in interest that progressive rock has gained in recent years, that those isolated in their home studios during this coronavirus pandemic are busy beavering away on assorted long form works that will bombard us with their own madcap versions of Olias Of Sunhillow.

Such derogatory comments as “bonkers” are attributed to Jon Anderson’s debut solo album, one that first saw the light of day back in 1976, when each of the then highflying members of Yes were releasing their own spin-off albums. In hindsight (as excuse for not researching historical data) it was probably just a few reviews, bolstered by some personal chagrin that vocalist Anderson had the audacity to play all featured instruments on the album, that has left us with the impression it was universally derided save for those who were truly devoted acolytes of the man.

The problem lies in that it’s a musical story, a rock opera if you will – Name me one rock opera that you understand the plot to without having read or heard about such elsewhere? We all know The Who’s Tommy was about a deaf, dumb and blind kid but that he found enlightenment and wanted to save the world is a touch more obscure. In fact, Olias Of Sunhillow actually has a more pragmatic plot: The planet Sunhillow is about to blow up like Superman’s Krypton, but Olias comes to save the day and alongside fellow magicians conjures a star-ship into life that helps them escape, face some dangers along the way then land safely on a new planet called Asgaurd.

Again, without being told the plot you won’t be able to work that out from the lyrics. Anderson proves obtuse, often too free flowing  in verbiage rather than insightful, with a tendency to corrupt accepted grammar in such a way that the desire to pull out a red pen as protective talisman can be profound. Yeah, but so what, many Yes fans may declare… I guess the point here being that while Close To The Edge may not make much literal sense, it feels as if it does. Whereas, Olias Of Sunhillow tends to lack in emotional drama, overall but not completely.

The more outré sci-fi-come-fantasy aspects are what people tend to claim to be bamboozled by. However, by ’76, an Arts Council grant had vested British science fiction magazine New Worlds with the opportunity to become both experimental and avant-garde, the French had torn up comics’ rule book with Metal Hurlant, most university students had a dayglo Che Guevara poster on their wall, and album cover artist Roger Dean’s Dragon’s Dream was publishing art books of sub-Salvador Dali type renderings that were designed for the modern coffee table.

We did not need to be taking magic mushrooms to accept the fantastique had entered the mainstream, and punk rock would just have to be patient a little longer.

In fact, if the record had bombed that badly first-time round Anderson still navigated a healthy career, both solo and as Yes frontman, thereafter. That there remains a committed audience for Olias Of Sunhillow is evident in this lovingly put-together edition. Remastered with a 5.1 surround sound up-mix version available, even the clarity of the downloaded option I have is quite precise, and crystal clear. A lavishly illustrated booklet features photos, lyrics, art, interview with Anderson and documented essay from Malcolm Dome that all help establish the whys and wherefore before we begin to press play.

The rumble of thunder, a landslide, or more specifically a volcano erupting, greet us on opening track ‘Ocean Song’. Keyboards play establishing a motif as mellow overture, and either harp or some synthesiser appropriating it glisten prettily in a near-minimalist manner; oriental textures becoming more Indian-influenced as it merges into ‘Meeting (Garden Of Geda)/Sound Out The Galleon’.  Here vocal harmonies sing up and down scales, confirming it’s Anderson in the control seat, though the strange “ET-e-e” repeated phrase makes you wonder if he knew what Spielberg was planning film-wise a few years down the road.

It’s now the first of several approximations of what might be called a rhythmic Yes shuffle appear. These are basically  simplified variations on how Squire & Bruford kick in on the classic ‘And You & I’.  Whereas the lead synth line takes Vangelis as inspiration (as the following song will Patrick Moraz, and thereafter we’ll have Rick Wakeman styled orchestrations). Lyrically, Anderson establishes the problem Sunhillow faces, well kind of; it only really gets going once the chorus comes in that we start to invest emotional interest.

With ‘Dance Of Ranyart/Olias (To Build The Moorglade)’ chords echo pleasantly amid synths and what might be an overuse of harp. Then we have noisier synthesisers squiggling furiously like The Clangers having a row, prior to another bump-along Yes rhythm as Anderson sings progressively louder before segueing into ‘Qoquaq En Transic/Naon/Transic’ where there’s more of the same before the reintroduction of oriental sounds and vocal harmonies and orchestral themes taking hold.

The experimental over for a while, ‘Flight Of The Moorglade’ stands out. A stronger song in and of itself, string happy with melodic bird shrills culminating near the end.  Musical drama also gets added as focus with ‘Solid Space’ the overall impression taking us back to Saturday morning matinee cinema shows with Flash Gordon about to crash land on some alien planet, with this feeling extended on the opening section of ‘Moon Ra/ Chords/Song Of Search’ as if the hero disembarks from his vessel and explores the new world before him, that it comes across as a stoned Morris dance in parts actually works.

A mellower section follows, before a fine finger-picked nylon guitar grabs the attention prior to mellotrons leading us into final number ‘To The Runner’ where earlier wavering eastern musical leanings are filled with a more European influence, as Olias’ people settle in Asgaurd – How much of this relates to Indo-European ethnolinguistics I’ll leave to those who’ve read the works of Vera Stanley Alder, one of the inspirations for Anderson to create this work.

As an overall work that you  can put on and just play for the love of music it’s pleasant, not profound aurally – Sort of like only getting to hear an extended version of ‘Part III: Discovery’ on Rush’s 2112 without the bombastic assaults either side. When Anderson brings things down to a more-simpler acoustic based singalong in places there’s actually more meat to the songs themselves. Most importantly, there’s no doubt those who’ve put this new collection together have done so not just with love but with quality professional attention too so those purchasing it – while most likely know what they’re getting musically – are still in for something of a treat. 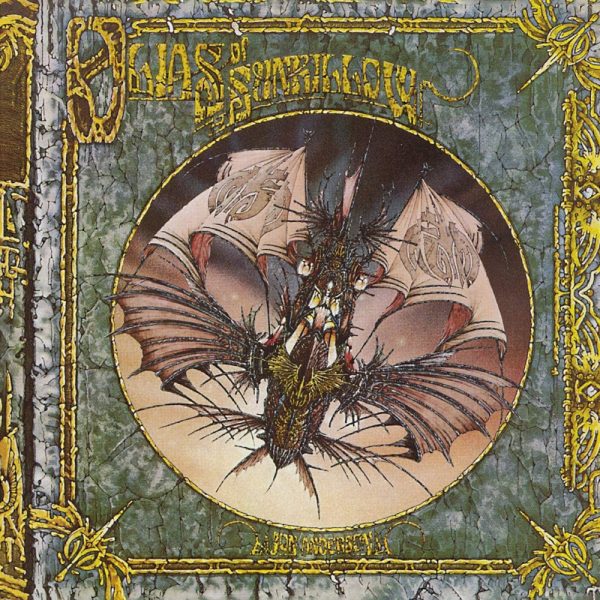