The word “legendary” is nowadays overused and thrown around with reckless abandon but in the case of guitarist John McLaughlin it’s perfectly apt. Seminal albums by Miles Davis (Bitches Brew), Jack Bruce (Things We Like) and Santana (Welcome) have all been enriched by his playing and that’s before we examine his prestigious output with The Manavishnu Orchestra and Shakti. Captured at the renowned jazz and blues festival The Montreux Years finds John in a variety of guises and charts a few points along his amazingly kaleidoscopic career.

Recorded at various dates between 1978 and 2016 our first stop is 1984 for a performance of ‘Radio Activity’. At this juncture John had reformed The Manavishnu Orchestra and they proceed to deliver the ultimate in jazz rock fusion and almost four decades later it still sounds fresh and forward facing. With unique time changes and tribal drumming, you can hear echoes of ‘Radio Activity’ in much of today’s music; it’s progressive in the truest sense and you feel it could fracture in any direction. On this opening cut John’s playing is quite subdued yet when we rewind to 1978 and ‘Friendship’ (performed with The One Truth Band) his skills take centre stage. John McLaughlin is one of those rarefied guitarists who has his own unique signature sound (think David Gilmour or Mark Knopfler) that’s instantly recognisable and the hands running up and down the fretboard could only belong to one man.

It’s back to the ‘84 concert for a dreamy rendition of ‘Nostalgia’ that’s at once complex yet accessible but sometimes it’s best not to over-analyse; just let it wash over you like a soothing balm. The aptly titled ‘Acid Jazz’ is dictated by African rhythms and you can definitely hear a Miles Davis/Sun Ra influence; it’s free form yet exists within clearly delineated boundaries. 1987 found John performing at the Casino Montreux with flamenco legend Paco de Lucia and it’s a paring that fits together like yin and yang. ‘David’ finds lightning scales juxtaposed with stodgy riffs and when the pair trade blistering solos at the finale you get the feeling that things could easily go off the Richter Scale. Like two cogs perfectly interconnecting there’s some telepathy occurring between John and Paco on ‘Florianapolis’ and the audience is held spellbound, so much so you can almost hear a pin drop, but that calm is shattered at the songs conclusion when the crowd erupts in rapt applause.

The final two tracks find John in full-on guitar mode as he paints an abstract picture inside the frame of 12 bar blues. As is the way with most great guitarists John knows that its sometimes not what you play but what you don’t, it’s about leaving space so that the listener can infer meaning and the penultimate ‘Sing Me Softly Of The Blues’ is punctuated by huge white spaces. Awash with keys, it’s the type of song you’d expect to hear wafting from a late-night juke joint as John bends his strings to make the most complex motifs seem so effortless and gives birth to a vivid soundscape. Fast forward to 2016 and we find John McLaughlin and The 4th Dimension bringing a sense of closure with final track ‘El Hombre Que Sabià’. Translating as ‘The Man I Knew’ it’s a song written in tribute to Paco de Lucia and its frenetic style, played by a cast of international musicians, (almost) replicates Paco’s dizzying technique.

Despite the decades that separate these songs and the various incarnations in which John McLaughlin appears The Montreux Years hangs together as a cohesive whole. That’s because the inventiveness that characterised his early career has stayed with him throughout. Beautifully packaged, expertly mastered and featuring sleeve notes from the man himself The Montreux Years will delight long term fans and those lucky souls discovering John McLaughlin for the very first time. 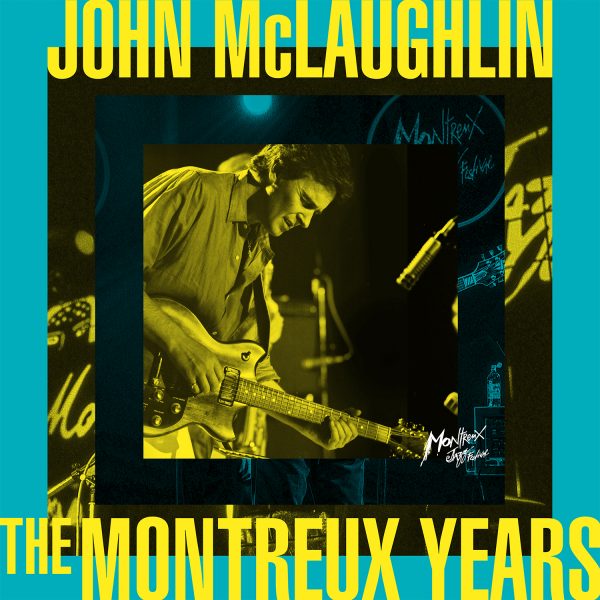