Cooler than cool and spooky as f***

I may be a small demographic but lately I’m not so sure. There appears to be a generation whose first albums and musical memories are the groundbreaking (although we didn’t realise at the time) electronic scores to 80’s low budget horror and sci-fi movies (usually recorded badly with a tape recorder in front of the TV). Our Elvis, our Beethoven, was Halloween meister John Carpenter and now, after two brilliant albums of new music, he’s given us what we’ve wanted – an entire album of brand new re-recordings of his classic themes. Ladies and gentlemen, I give you ‘Anthology: Movie Themes 1974-1998’.

Carpenter, as ever, is joined by his son, Cody, and his godson, Daniel Davies, to record these audio flashbacks. They start off in rocking fashion with ‘In The Mouth Of Madness’. Its riff (originally played by The Kinks Dave Davies) is given a more muscular, metal makeover and now resembles ‘Enter Sandman’, with its chugging guitars over Carpenter’s synth wash. And then we’re off down a dark, sinister memory lane. The cooler than cool theme to Carpenter’s urban crime masterpiece, ‘Assault On Precinct 13′, is beautifully rendered – badass, creepy, menacing and a joy to hear in this state of the art setting, a much needed step up from their unremastered originals or bad copies on supermarket 3cd hits of Halloween compilations.

These makeovers are subtle and not too intrusive, always there for the songs’ benefit. They are a dust and polish rather than ugly new wallpaper and a feng shui rejig. ‘The Fog’ (one of Carpenter’s best – I mean, murderous undead pirates…what’s not to love?) is brilliant. That delicate piano motif and the emergence of the synths, bringing the fear, then that big ‘Psycho’ moment – sublime!

‘Prince Of Darkness’ is stunning – a huge, terrifying mash up of distorted electronics and synthesised choirs of angels and demons. The huge, atonal blasts of noise recall Nine Inch Nails or Depeche Mode at their most decadent. And then we have a one/two of Carpenter’s finest – the added instrumentation makes ‘Escape From New York’ sound like its sequel’s rocked up version (which caught a bit of fan boy flak back in the day) but this version is brilliant – big and powerful without ever losing its mojo, it’ll have you scouring your house for a battered eyepatch.

‘Halloween’ (the theme that launched a thousand pale imitations) is reverential and drenched in blood. To this day it’s still chilling – one paced, relentless, unstoppable – much like young Master Myers. ‘The Thing’ is another minimalist Carpenter classic…except it’s written by Ennio Morricone. However, it’s so Carpenteresque that you have to wonder how much input he had in its creation and why he needed another composer to write something that’s so typically JC. It’s one of his, or…erm, not his…best. A rocked out ‘Christine’ (see above) brings things to a conclusion. But not a nostalgic conclusion, the hint of distortion and current arrangements keeping things bang up to date.

It’s a welcome relief to have all of these themes finally compiled together in the one place on this definitive collection (and just in time for…you know when). Brilliantly arranged, performed and produced, let’s hope he tours on the back of this brilliant release. He’s behind you!!! 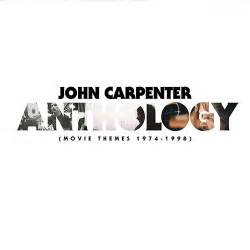