On the market for some top-drawer blues rock? Then look no further. Bonamassa is back, with a live CD/DVD recorded during lockdown to promote his really rather great latest album ‘Royal Tea’ and also to offer a slim glimmer of light to the many thousands of us starved of a healing fix of live music. On both counts this delivers in spades.

So, what do we need to know. Bonamassa couldn’t tour in support of ‘Royal Tea’ because of, y’know, Covid. This is galling – ‘Royal Tea’ is a great album, one of his best. Recorded at Abbey Road and partly co-written with Bernie Marsden, it’s an affectionate homage to the greats of the British Blues boom, and it’s also just a killer album in it’s own right, full of great songs and stratospheric musicianship. To not play these songs on stage is simply wrong.

So, with the advent of livestreaming, Bonamassa decided to rectify the situation. Armed with his small, stellar live band, they decamped to Nashville’s historic Ryman auditorium®, formally the home of the Grand Ole Opry, a venue steeped in tradition and, erm, history. In lieu of an audience the seats were filled with life-size cuts outs of said non-existant audience. The stage was set, lights and amps were switched on, the band plugged in and what you see is what the viewers got.

After an introductory narration by the actor Jeff Daniels we cut to the band. The lighting is moody, the stage set-up is a mixture of minimal and elaborate (if that makes any sense). Bonamassa, clad in a suitably embroidered, country style jacket is looking lean and sombre. And we’re off, into a scorching rendition of ‘When One Door Opens’ which flies from scorching, wah-wah driven rocks out’s to quiet, atmospheric string bending. 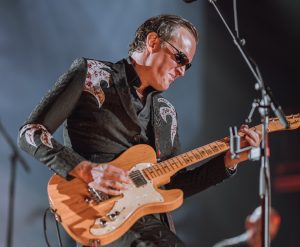 It’s no-frills all the way. The band tear through one song, and then tear through another. And that’s it. ‘Royal Tea’ get’s almost a full airing (only ‘Savannah’ is not played). The live environment suits the album to a T, bringing it’s dynamics and emotional peaks to loud, technicolour life. By the time we reach the Green Onion-isms of ‘High Class Girl’ the band are beginning to fly while Jimmy Hall joins on harmonica for ‘Lookout Man’, sparring with Bonamassa to create some fiery interplay, his harp swirling around Mr.B’s metallic chugging and flurry of ‘dusty end’ guitar heroics.

The 9 plus minutes of ‘Why Does It Take So Long To Say Goodbye’ is a standout moment, Bonamassa taking off into several head-spinning moments of virtuosity while ‘Beyond The Silence’ highlights Joe’s most undervalued weapon – his voice, which just keeps getting better with age. We then head into a trio of tracks from ‘A New Day Now’, which has recently enjoyed a 20th anniversary reissue.

Bonamassa clearly relishes playing Rory Gallagher’s classic, ‘Cradle Rock’, reminding us that he’s no slouch when it comes to slide guitar. We end with a bit on an unexpected prog out. The band ease into Jethro Tull’s ‘A New Day Yesterday’ before segueing into the glorious, snaking ‘Würm’ riff from Yes’s ‘Starship Trooper’ – they stretch it out indefinitely, seemingly not wanting to end. A wonderful finish to a fine show.

This is an essential purchase for Bonamassa fans, offering the chance to watch the man and his band play and interact in minute detail, and is released in multiple formats. It’s also akin to pornography for guitar fans, Bonamassa playing some absolute beauties from his extensive collection – special mention must be made of the beautiful vintage Les Paul with the stars ‘n stripes pickguard. The only minor quibble in the whole thing was the choice to bolt on footage of fan applause from previous JB live DVD’s after each song, to this reviewer it felt a bit patchwork and unnecessary. But, for those of us who missed out on seeing the man himself on stage, this is as good as it gets. 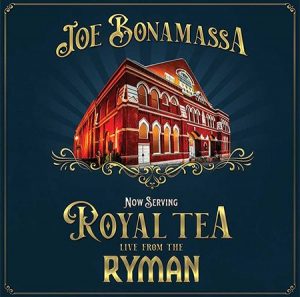