Verily, I sayeth to you, that God did visit his earthly dominion and the people rejoiced.

God’s marketing people have been revamping the Old Man’s image and approach, of late. After the last few thousand millennia, all that stone tablet nonsense, burning bushes and whatnot are now deemed wholly outdated, inappropriate and oh-so BC, ya dig?

The message has certainly suffered as result of the hopelessly old-fashioned medium and in a sense that medium has become the message. Not good. All that resulting confusion, conflict and war, with myriad pygmy sects all convinced they and they alone have a hotline to the Big Man. 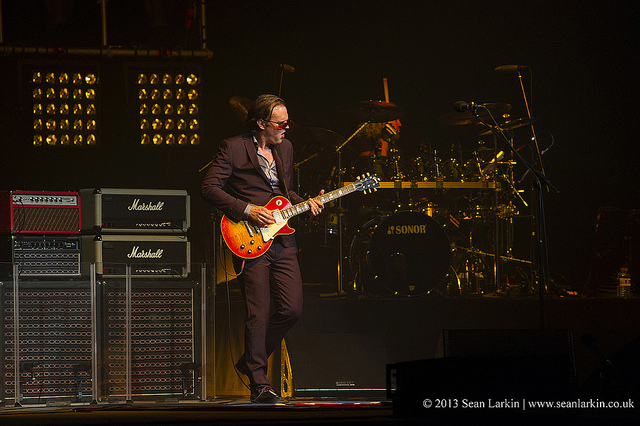 Well now he’s back; revamped, refashioned and rebranded. A deity fit for the digital age. He’s ditched the stone tablets and parting of seas, along with the other retro trappings of yore, and now, armed with an array of both electric and acoustic guitars, God is taking it to the people direct.

Of course there might be still be some lingering confusion regarding His real identity, not least on the part of the Divine dude himself; after all being both your own son and Father with a sprinkling of Holy Ghost added to the mix would confuse even the most well-rounded of Supreme Beings. The smart money knows the score, though; Joe Bonamassa, The Artist Formerly Known As God, is here in the flesh and Birmingham is ready for The Rapture.

As It Is On Earth… 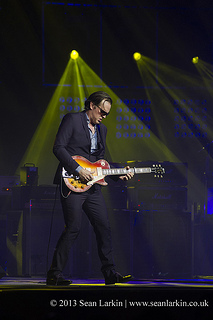 Confidence isn’t something you affect. It’s an essence. Something that stems from a core of knowing you can break rules and still succeed. In turn, it springs from only two places; deluded arrogance or unearthly talent. Sauntering on stage, sitting down and kicking-off your show, unplugged style – with barely an acknowledgment that in front of you are 12,000 souls – might seem risky and… arrogant? No. By the time He’d seared through the opening quintet of ‘Palm Trees’, ‘Seagull’, ‘Jelly Roll’, ‘Athens to Athens’ and ‘Woke Up Dreaming’, Birmingham had already had its money’s worth. Yes, really. There can be few people alive who make watching one man and an acoustic guitar such a thrillingly visceral experience.

One could scribble for hours, seeking to adequately describe the peerless talent that Bonamassa displays with such effortless class, but that talent has an equal; commitment. While many top-flight artists are content to charge top-dollar for short-changing displays of complacent laurel-resting and water-treading, He pours every fibre of his being into the infinite litany of licks and motifs that cascade from fingertips like tracer-fire from Heaven.

No gimmicky effects, no arty backdrops and no Spielbergian lightshow; just The Man locking and loading with three consummate musical artisans. Despite the presence of 12,000 punters – reduced to stunned, pin-dropping silence on several occasions – the effect is akin to catching the hotly-tipped next-big-thing in a packed sweat-box club. One of those, ‘I was there when…’ gigs that go down in rock ‘n’ roll history.

It’s actually quite unnerving to realise that He’s actually getting better, too. No vocal slouch to start with, the voice now has an authority, a seasoned maturity and an authentically bluesy ache, that breathes added delight into old standards and self-penned gems alike. Here, too, there is improvement; ‘Driving Towards the Daylight’ is beauty sublime but now it is offered up as the universal pean to the human condition we always knew it could be. 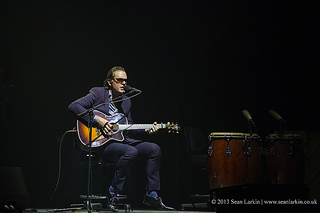 ‘Slow Train’; slow-burn but high-octane ramped up the energy as thousands of feet stomped in approval. Whole lotta shaking goin’ on where the NIA’s foundations were concerned. ‘Mountain Time’ was God’s gift to the weekend and then came, “… for the umpteenth time; ‘Sloe’ freakin’ ‘Gin.’” If you were there, you’ll know…

Absence of objectivity in a critic is a bad thing but not telling the truth is even worse. Whether it offends the cynics or not, one can only report that Joe Bonamassa is one of the greatest musical talents the 20th century has ever produced. Period. This writer hasn’t been so moved by an artist since Bernstein took Mahler’s 2nd symphony and made it unquestionably, inarguably and indisputably his own.

For all that, perhaps the most fitting review came from Midlands Rocks’ assigned photographer, Sean Larkin. A JB live virgin, the text he sent toward the end of the show read: “Now I see what all the fuss is about!”