So here we are again, another Joe Bonamassa live album. Yes, we’ve been here many times before and discussed previous live releases many, many times before. I’ll take it for granted that you know the score. This time around it’s time for another of JB’s ‘iconic venue’ live releases…the venue in question here being Sydney’s historic Opera House.

Ok, so what’s the deal this time around. Interestingly the material on display is fresh. The majority of tracks on this album are plucked from Bonamassa’s then latest album, the really rather good ‘Blues Of Desperation’. In fact, it’s one of his strongest studio albums. This bodes well. Also, all of the songs are extended takes – longer than their studio counterparts. The shortest song clocks in at six and a half minutes and we go rapidly upwards from there. Again, this is a good thing.

All good so far, let’s get down to brass tacks. ‘This Train’ sets the tone – a brief jam and we’re off into the song. It’s relaxed, confident, stretched out to over eight minutes. There’s a funky B3 solo from the redoubtable Reese Wynans before we head off into a full band groove. ‘Mountain Climbing’, with it’s Zep-lite riff is well played but somehow a bit flat, rescued only by Bonamassa’s killer slide guitar. Is it the production? Maybe this reviewers pre-release file is not the finished product? Is it this reviewer? Who knows, but something isn’t quite firing.

There are several classy, chill out moments. The atmospheric, twangy, late night road blues of ‘Drive’ and the Cooder-like gospel of ‘The Valley Runs Low’ veer closer to soft rock than Bonamassa has ever ventured before. That’s not to say they’re bad – muted trumpet solos and silde guitar/Hammond organ slow dances showcase a rarely heard side of Mr.B. The aforementioned Cooder and Little Feat spring to mind.

And on we go. It’s all here – Bonamassa’s patented quiet-to-loud solo’s, huge amounts of groove – riffs are vamped upon and stretched out to extremes. There’s a nice guitar wig out in the midst of the gospel-y ‘How Deep This River Runs’ – a bracing clash of styles but it works. There’s an enjoyable, contented amble through Clapton’s ‘Mainline Florida’ and a final double shot of a slightly muted ‘Blues Of Desperation’ (listen to it next to the recorded version, it’s more weary than desperate, the horns seem to sap strength from Joe’s guitar) and a fine ‘No Place For The Lonely’ – replete with Page style string bending and the best solo of the night.

This is a not entirely successful mixed bag to these ears. As previously mentioned, the production seems a little lifeless and the whole thing seems to lack a certain something. There’s no snap. This band are never going to be anything other than consummate but something is missing. Compared to Bonamassa’s own Greek Theatre live album, for example, this lacks fire and joy. As musically on point as it is, there is a distinct feeling of treading water. Maybe this particular show was a long way into a long tour but this, to me, is the sound of an artist who can be sublime being recorded on an average night.

A live album too far?

Released on 25 October 2019 by Provogue Records 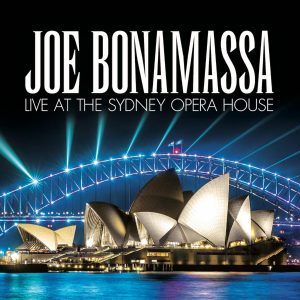