Last year when COVID-19 put the live touring industry on hold, guitar hero Joe Bonamassa did something unprecedented for his fans – he put together a one-night-only show at the iconic Ryman Auditorium in Nashville, TN to be livestreamed for fans everywhere. That night he united people across 44 countries worldwide for a phenomenal live music presentation of his brand-new album “Royal Tea” before it was even released.

The concert was re-mixed and mastered for physical release as “Now Serving: Royal Tea Live From The Ryman” on June 11th and will be available to own on CD, DVD, Blu-Ray and Double LP. The DVD will include a film introduction narrated by actor Jeff Daniels.

The stellar performance includes 12 incredible live tracks, featuring the best from his latest studio release Royal Tea, Joe’s 24th #1 record on the Billboard Blues chart, which was recorded at Abbey Road Studios in London. It also includes 3 electrifying tracks from his 20th anniversary album A New Day Now. Get your serving and relive the excitement time and time again with this once-in-a-lifetime release from one of the most celebrated Blues Rock entertainers!

Recalling the magical night, Bonamassa shares, “I have always wanted to film a show at the legendary Ryman Auditorium in Nashville. Our band has had the honor of playing there now 8 1/2 times over the past 10 years. The audience is always alive and electric, hanging on every word and phrase. It feels like the greatest, most intimate gig you will ever do but there are 2,300 people sharing this joy and musical journey. I love the place as it is a national treasure and selfishly close to my house. Here’s where I get to the 1/2 part. We missed you. As great as it is to be on that stage in any capacity, YOU the fans make it special. You are part of the show and a big part of it. As this show was being filmed live, almost 100,000 eyes were on us in various forms around the world in front of TVs and computers alike. But you were not in the room with us.”

Track Listing
1. When One Door Opens 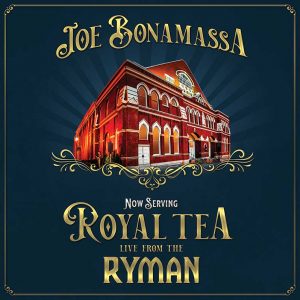