Can I get away with that as a review? Probably not, so I guess I’ll have to waffle on for a bit longer, but really, you’ve probably made up your mind already as to whether or not this is your cup ‘o java. The blues cover album – a tricky one. They can be very, very good (Bonamassa, Clapton) or very, very bad (Malmsteen). For decades they have symbolised many things – a paying of dues, a nod to roots (either held on to dearly or slightly forgotten on the road to stardom), giving an old blues legend a bit of a top up on the retirement fund (step forward again Clapton), or, sometimes, a signal of the well running dry – stasis, lethargy, crisis. Which will this be?

This album has a few things going for it. If you’re a blues artist, simply calling your album ‘The Blues Album’ is surely a declaration of intent. Yes, all of her albums are blues albums but this is the blues album. It’s setting up a certain level of expectation, this had better be good. Plus there’s a certain Mr. Joe Bonamassa involved. The album, recorded in Nashville, has been produced by Bonamassa (and Josh Smith), released on his KTBA label, guested on by Mr. B and he had a fair amount of input on song choices – Joe and Joanne (what’s their collective name? JoAnne…no, that doesn’t work) both have an encyclopedic knowledge of the blues so it was a fairly safe bet that we wouldn’t be getting the millionth recorded rehash of, say, ‘Smokestack Lightning’. This is an album of curveballs and deep cuts.

So, yes, the actual music. It’s good. Very good. It’s loose, live, laid back and consummately performed. Bonamassa’s production too, is wonderful. Warm, comfortable and nuanced, everything, and everyone, can be clearly heard. There are lot’s of fade outs…now, I’m not normally a fan of fade out’s but here they work, adding to the live feel, highlighting a band who love to play, jamming away into the night, buoyed by bonhomie and a genuine love for the music they’re playing.

‘Stop Messin’ Round’ (one of the better known tracks) sets out Taylor’s stall. A quick count in and we’re off into an organ led groove, Taylor’s vocals are smoky and raw, there is lot’s of blues guitar…obvs. A dash of barroom piano leads into a cool and easy solo before a glorious groove is settled upon, these guys are in no hurry.

And that’s pretty much how it plays out. Horns appears on track two and decide to hang around for the duration, lending the whole album an authentic soul sheen. ‘Keep On Lovin’ Me’ adds a soupcon of Jazz to the banquet before Taylor’s solo grabs the song by the scruff of the neck and leads it into an almighty jam.

The shortest track on the album, ‘Don’t Go Away Mad’ has a vaguely Country feel and heralds Bonamassa’s contribution to the album. Their voices work well together, flowing like a fine wine before we’re treated to a short but sweet solo trade off. Nice.

We also get slow blues, big band B.B. King blues, a killer take of a lesser known Little Richard track and a final, scorching piano-led blues shuffle. If ever there was an album that does exactly what it says on the tin, then it’s this one. But it’s done so very well. From song selection to performance and production, this is a class act. Blues fans will not want to miss this one. Nice Blue Note style album cover too. 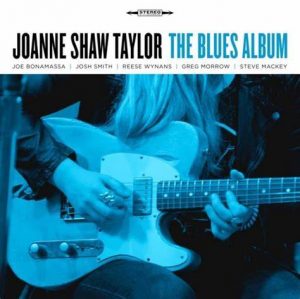