Her first concert following the covid lockdown, Joanne Shaw Taylor stepped onto The Franklin Theatre in Franklin, Tennessee, USA on January 20, 2022, where it was recorded and filmed for a CD/DVD and CD/Blu-Ray package that includes a collectible 24-page CD booklet.

The film opens with band already on stage, the camera pans in and round, coming to rest on Joanne Shaw Taylor as she attacks her guitar and launches into ‘Stop Messin’ Round’’. The camera pulls back for a widescreen view as the chorus picks up and two background singers, alongside a full band line-up. “Jimmy Wallis on the keyboards, everybody!” she calls out as the guy to her left solos on piano before shifting quickly across to organ. Taylor follows suit, roaming the stage – Its noticeable how forceful her playing is compared to the more laid back approach of her band, and indeed the unit she brought across to the UK on her recent trek to the homeland.

The line-up in full is the lady herself on vocals and lead guitar, Rob McNelley on guitar, Steve Mackey on bass), Jimmy Wallace on keyboards, drummer Nick Buda, who’s obviously the fulcrum by which this band swings into action or otherwise as he’s constantly got one eye on her, or casting his gaze on other members keeping check on everyone, saxophonist Dave McMurray, and backing vocalists Devonne Fowlkes and Kim Fleming.

“Good evening, guys,” she calls out as the song ends, and quickly takes up the next, singing over mellow keyboards and sax as a grooving roll offers some soulful blues with ‘If That Ain’t A Reason’.

The screen continues to patrol an overhead view, taking in the full compliment of the band and their action, before another camera takes over approaches the stage, pulling in from audience right. How many there are in all is hard to tell, they do keep on the go. Presumably there’s a dolly camera down the main aisle, shifting back then zooming in to focus on Taylor, notably when she comes to her second solo on this second song in, with the kind of close-ups that’ll have guitar freaks rewinding the section to cop her licks.

Noting the hit status of her Blues Album, and that she’ll be playing a number of tunes from it tonight, next up is ‘Keep On Lovin’ Me’. A wilder Stax fuelled Albert King squealing guitar with chipper harmonies and cheeky tooting sax, she sings expressively, with upshots featured as she strikes a guitar hoer pose before striding across the stage. The tempo goes down, the backing vocalists chanting: “Keep loving me, baby – I’m so glad you’re mine,” as she tinkers gently on guitar before a raging fury of notes leads the piece to its conclusion.

For ‘If You Gotta Make A Fool Of Somebody’ there are sultry close-ups on McMurray honking away, Taylor herself vocally expressive on this one, leaving McNelley to take the solo. Introducing Kenny Wayne Shepherd as her “dear friend” and one of her “main influences” the first is duly noted as they hug, the latter the way his right-hand strikes across the breadth of his strings, in a manner that Taylor echoes. A tall thin guy, blond hair initially under a cowboy hat, his stage presence is confident and incredibly laid back. They play ‘Can’t You See What You’re Doing To Me’, Taylor opening with a solo, then he laying in lead lines as she sings. The band begin to beef up their sound, suiting Shepherd’s hot fire style, Taylor smiling as she looks on before they commence to trade licks.

Shepherd suddenly vanished offstage, McNelley lays down arpeggios as Taylor sighs, holding onto her microphone, forcing out high notes as the backing vocalists join in on ‘Let Me Down Easy’. Even as they proceed to chug down on ‘Two Time My Lovin’’ it becomes all the more apparent this is still a much mellower band approach than the band she brought over to the UK, whether that’s due to everyone easing in after Covid lockdowns or we Brits prefer a harder driven edge, remains to be seen but when the cameras turn to face the audience and we confronted by so many wearing face masks, and mere months later it all looks so alien and hardly imaginable; let’s hope things stay that way. What counts here on the version of the song being played is that there are some tasty guitar solos riffing on the song’s man themes and the sax playing is being felt more profoundly.

Mike Farris walks on stage, decked out in leather jacket, fancy scarf, shades and a tattoo on the side of his neck and they duet on I Don’t Know What You’ve Got’. Sultry, slow, quite moving but not as fast as Farris’ disappearance after he’s hugged her. Is there a black hole guests vanish down as soon as their slot’s over?

More up tempo, catchy sing along boogie rock ‘n blues come our ways as cameras shift here, there and everywhere (getting in some good effects pedal shots for those interested) on ‘Three Time Loser’, as both Wallace and Taylor solo away. Buda sets the beat for ‘Dyin’ To Know’, with Taylor picking out the country blues opening in the nimble-fingered manner of the late Rory Gallagher, and this proves even catchier as you find yourself tapping the carpeted floor of your living room watching it on the goggle box.

“An older one of mine,” remarks the lady on stage as ‘Just Another Word’ rolls on a funk bass line, chord chink between sweeter melodies in a song that has pop nuances beyond its blues form and manages to transcend both. This time through, Taylor’s guitar soloing emphasises the song rather showing any need to grandstand, while on ‘I’ve Been Loving You Too Long’ she swaps over to black Les Paul offering arm chording on a tender slow blues gospel. Back on the beat, ‘I’m In Chains’ delivers in that Ameri-Indian brave-no-the-warpath way early Free used to, now the backing vocals are a little too Motown here, but the rich organ playing compensates, and following Wallace soling, Taylor outlines a wilder one of her own.

This leaves the stage free for Joe Bonamassa to appear for the next three numbers. Not only doesn’t he do a vanishing act after playing with her, he joins for three unexpected and pleasantly different numbers: ‘Don’t Go Away Mad’ comes on like an Andrew Sisters pastiche over a county boogie tune, played dead-pan straight it proves rather infectious. For a cover of the classic ‘Summertime’ Bonamassa offers a slow lyrical guitar intro, applying careful notes as she sings, and the pair imbue the song with a deeper, or truer, blues the overwrought showbiz item can become in lesser hands. There is also earnest soloing from the pair.

Finally, following band introductions, we get the old Delany & Bonnie number ‘Only You Know And I Know’ and while there’s less vocal duetting than we might’ve expected, guitar-wise there are enough nods to Eric Clapton, albeit there’s a warmer guitar sound than when he played one the number. Overall, it’s a bit of a big band rendition that rolls and chugs merrily away. With a big smile and a deep exhalation of air that says it all on her exhausted face, Joanne Shaw Taylor says thank you and goodnight… Mind you, DVD/Blu-Ray purchasers will get a few extras beside.

Excellent clarity film, if a little busy at times, hard-line Joanne Shaw Taylor won’t find much fault in the songs offered, and there are a pleasant nice surprises too. 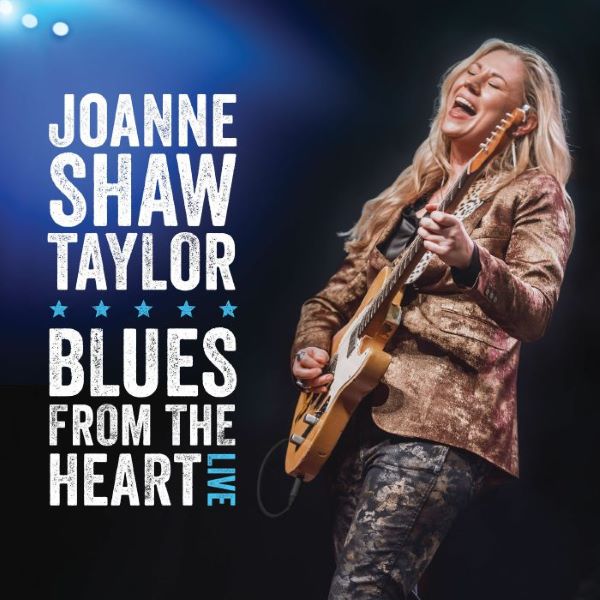