A man and his guitar.

Having predicted this some time ago, it’s finally happened. Joe Bonamassa has released a multi-format DVD/CD document of 2016’s mini British Blues Explosion tour. The Blues Explosion was a time that was crucially important to Bonamassa, shaping his tastes, sound and very possibly his desire to pick up a guitar in the first place. So, he toured the UK, putting together and playing a tribute to our holy guitar triumvirate – Clapton, Beck and Page. And, as Bonamassa himself pointed out, without their input: “The blues may very well have never expanded into rock music as we know it today, and indeed may have passed into history”.

The final night of the 5 date tour was filmed, at the historic and picturesque Old Royal Naval College in Greenwich – providing a unique backdrop and continuing the ‘Bonamassa in a beautiful venue’ theme of his previous DVD’s. The video begins with a brief explanation of the Blues Explosion (voiced, if I’m not mistaken, by the redoubtable Paul Jones), before the ever dapper Bonamassa takes to the stage and eases into ‘Beck’s Bolero’. His regular live band are clearly enjoying themselves and things move up a gear with ‘Rice Pudding’, stretching out into a jam, Mr.B is clearly not cowed by the history and gravitas of these songs.

Next up is ‘Mainline Florida’ from Eric Clapton’s debut solo album and it very quickly becomes apparent that Bonamassa is most closely attuned to Clapton’s vibe, his playing is closest to that of Mr.C’s and his voice fits perfectly, it’s a great version.

Rolling drums and barrelhouse piano usher in ‘Boogie With Stu’, the evenings first Page track – which is amped up and played electric and bluesy. It’s an interesting song and played very straight. It’s good but lacks Zeppelins sense of flair and risk. A pattern is beginning to emerge…

Bonamassa then tackles a trio of Beck songs, all culled from ‘Truth’ and ‘Beck-Ola’. Which is wise, Beck was at his most traditionally blues rock back then. Playing later, more string-bendingly, mind-blowingly alien Beck would have been a much bigger ask…for anyone. Bonamassa plays well, he’s in his element with the big rock riff of ‘Plynth’ which segues seamlessly into ‘Spanish Boots’.

Next up is Clapton and Bonamassa is on fire. His take on the scorching slow blues of ‘Double Crossing Time’ is flawless and a definite high point of the evening, both guitar and vocals are phenomenal. ‘Motherless Children’, while great, is a tad heavy handed and makes you realise how effortlessly Clapton handles this stuff, its swing and lightness of touch are vital. Creams ‘SWLABR’ is played brilliantly, although Joe admits that he has no idea what the lyrics are about – “but the picture has a moustache”…what’s not to get, Joe?

Page reappears for an extended take on ‘I Can’t Quit You Baby’. Light/shade, fast/slow, it’s all here, in spades. It’s bang on the money, and with Bonamassa, it always will be, you’re in the safest of hands. What it will always lack, however, is Page’s ‘will he make it to the end of the solo without fucking up’ sloppiness, and the corresponding moments of transcendence when he creates one of those on the hoof, almost accidental moments of magic. Martin Scorsese, once talking about Coppola, said something along the lines of,’ the good are consistently reliable while true genius is erratic’.

We’re into the home stretch. Clapton’s ‘Pretending’ is an interesting choice and brilliantly executed. A real crowd pleaser and, coming from 1989’s ‘Journeyman’, the most modern song on the setlist! And then it’s Page all the way. We get a classy mash up of ‘White Summer/Black Mountainside’ (with a dash of Bonamassa’s own ‘Django’) and then ‘How Many More Times’ – reminding us what a special, primal thing a full-on Page riff is. It segues into ‘The Hunter’ and then, finally, oddly, a drum solo…possibly better placed mid-set?

As ever, this is top class Bonamassa product. Expertly played, recorded and filmed, with some gorgeous shots of the sun setting colourfully over old London tahhhn. Even more than his other tribute tours, this one was all about the man and his guitar and, by carefully choosing songs that fit in with his skillset, Bonamassa has done himself proud. There was nothing too iconic or out-there that he would struggle to match. After all, why play ‘Layla’ or ‘Whole Lotta Love’ – who can play them better than their creators? No one knows this better than Bonamassa and so he chose accordingly. And hey, while you’re at it, why not go back and listen to these originals…they’re good. 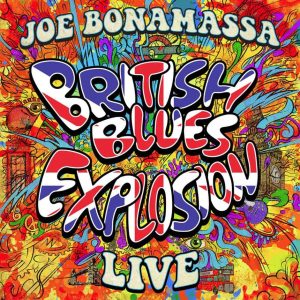