Cunning little title. The marketing schtick here could be that Jizzy Pearl’s referencing the media stunt he pulled back in the 90s up in the Hollywood Hills to promote Love/Hate’s Wasted in America album; unfortunately such antics tended to backfire whenever success looked that band in the eye and gave them a crafty wink. Maybe it’s premonition? After all, the singer’s about to tour the UK and was originally going to bring this mini-album out under the Love/Hate monicker until past members threatened lawsuits.

Pearl has said that the record is about: “Taking the old out of old-school and delivering songs that sound every bit as classic as the classic Love/Hate songs fans have grown to love”. I beg to differ, and reckon he’s better dissociating himself from that brand because Crucified isn’t the gonzoid LA hair rock most people will expect despite him now fronting Quiet Riot and having done stints in L.A. Guns and Ratt in between. But Pearl’s been prepping on history homework, that’s for sure: Alice Cooper described his band’s original line-up as being Beatles-, Stones- and Yardbirds-influenced; you replace the latter with Page forming Zeppelin and shake in just a smidgeon of sleaze and you’re there.

Kicking off like The Ramones but with a dirty bottom-end metal riff careering towards the mosh-pit, ‘Hanging You Out To Dry’ is a short sneering rant of a put-down, extending the album title theme.  Lyrically ‘You’re Making Me Nervous’ partners that, albeit ambiguously for you can take it to be about a friend, lover, fans or Pearl himself looking in a mirror. Its dead-eyed psychedelic drama continues with the Kashmir-paced ‘Sunny Day’ featuring a spiky guitar solo exploring all the nooks and crannies down the guitarist’s fretboard. That Eastern vibe continues on the acoustic Zeppelin-styled raga rock as-if-sung-by-Lennon-whining of ‘Love Is All’ where Pearl preaches peace, love and you kind of wait for there to be a turnabout punchline and instead learn to go with the flow.

Stand out track ‘I Don’t Want To Be Your Baby’ breezes in evoking the Stones in countrified reefer-driven ballad mode. Whereas your Black Crowes, Quireboys et al aim to have you crying buckets when they pull this kind of stunt, Pearl offers vintage Jagger bitchiness with an added sense of detachment. Crucified ends strongly with ‘Too Late’, a thrusting slow blues, some classy chops and neat biting licks on guitar, and Pearl’s throaty vocals at the forefront whereas they’ve tended towards blending in harmonically on some tracks.

Not an immediate attention grabber; Crucified’s surprisingly subtle and repeated listens prove rewarding, demonstrating Jizzy Pearl’s band have something to offer other than old hits on their imminent UK tour (Ed: details here) 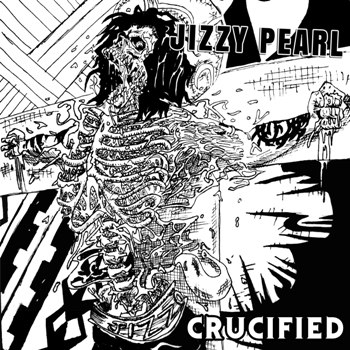