Canada’s The Agonist are on top form this evening. Not about to waste anyone’s time, the band launches into ‘In Vertigo’, the lead single taken from their latest – and greatest – album, Orphans. And from here on in until the close of their set, the crowd belongs to them. While guitarists Danny Marino and Paco Jobin and bassist Chris Kells fire out the riffs, their combined brutality as tight and machine-like as Simon McKay’s dexterous drumming, four years in, Vicky Psarakis once more proves herself to be the right person for the job. Her vocals remarkable, her range outstanding, on stage she hits the operatic and melodic highs and grinds the death metal lows effortlessly.

With most of the songs from the Psarakis era making up most of the set with two from the White-Glutz era – ‘Dead Ocean’ and ‘Panophobia’ – to flesh it out, The Agonist show in a relatively short set that the most significant effect that the recent line-up change has been is one of a marked improvement. Not to dismiss the contributions of White-Glutz or the achievements of band of that era, but this line-up feels like a band that have found that space where they can work together for the greater good of the band. Orphans is testament to that. And so too is their stage performance.

Since forming in 2009, Jinjer’s releases have been consistently impressive, each new release marking a significant development in the band’s sound. Both the Micro EP and the Macro album (released, respectively, in January and October of this year) are outstanding pieces of work and demonstrate a band that’s been channelling their strengths to produce some seriously heavy music. This, combined with what looks like an endless tour schedule, sees the quartet returning to Birmingham a much bigger band than the first time they were on these shores in 2017. And thanks to all that touring, Jinjer are incredible on stage too.

The back projection sees four cogs – two left, two right – slowly spinning with a 3-minute countdown ticking away between them. The band enter and the show kicks in to much applause, much cheering, and many many horns held high. With the band since 2016, drummer Vladislav Ulasevich is a machine, his beats precise, crushing, and nuanced to further flesh out the songs with force. Up and down and headbanging on the risers, the super-charged riffs and proficient musicianship gives guitarist Roman Ibramkhalilov and bassist Eugene Abdukhanov a monster presence. And vocalist Tatiana Shmailyuk, well, what need one say? With vocals ranging from demon-with-a-grievance growls to demon-with-a-soul melodies, there’s an intensity and an integrity to her delivery that makes her one of the best of the genre. Together, Jinjer have got the grooves, the grunt, and the power to bring the walls down.

Featuring six tracks from 2016’s King of Everything, four from Micro, four from Macro, and one from 2014’s Cloud Factory, the set list is blast after blast. From the moment the opening blast of ‘Teacher, Teacher’ from this year’s Micro EP hits, the room is theirs. And the audience respond in kind, headbanging and mosh-pitting (is that a word?) like it’s the end of the world. The energy in the room is palpable. Next up is the fierce ‘Sit Stay Roll Over’ followed by the enormous ‘Ape’, and while you’d think a bit of reggae would chill everyone out, the intense ‘Judgement (& Punishment)’ from Macro soon lays that myth to waste. And from ‘I Speak Astronomy’ through to ‘Words of Wisdom’ and encore ‘Pisces’, it’s clear Jinjer are a band very much in the ascent. I suspect next time we see them in Birmingham it’ll be at a bigger venue. And I suspect I’ll be every bit as intense as tonight’s gig. Incredible band, incredible show. 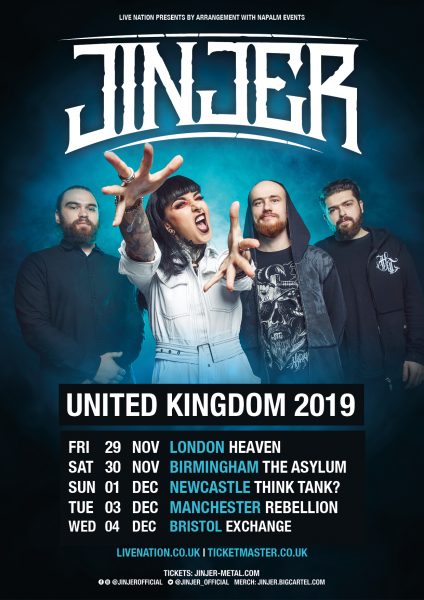