Formerly one half of indie rock/electro pioneers Carter the Unstoppable Sex Machine, Jim Bob’s career has been defined by a constant flux. From his alt rock beginnings to his current incarnation as a punky poet laureate there’s been a lyrical astuteness present that’s unified his work. A calendar year since his last album gate-crashed the national charts Jim Bob has returned with his latest indictment on the state of the nation, Who Do We Hate Today.

Opening to a brief, discombobulating introduction ‘Jim’s Bed Of Unease’ is a jumble of words that perfectly encapsulates our age of information overload. It’s a multitude of voices all speaking at once; the constant chatter of social media that dampens any chance of sensible conversation. It’s an intro that means the following ‘The Earth Bleeds Out’ detonates like a musical bomb. Recalling the energy of early Buzzcocks it is both discordant and tuneful and, like Manchester’s finest, it doesn’t hang around and says all it has to in 78 blistering seconds. With plenty of distortion on the guitar and drums that really kick ‘The Earth Bleeds Out’ is a call-to-arms that’s sure to rally the troops and it leaves the listener slightly windswept in its wake.

There’s something almost folky in Jim Bob’s lyricism; each song is a vignette that reports a slice of everyday life, and while it’s not always pretty, Jim never fails to sugar the pill. Case in point being ‘Shona Is Dating A Drunk, Woman Hating, Neanderthal Man’. Wrapping a serious message inside an insanely catchy melody renders it at once thought-provoking yet strangely danceable and it’s a juxtaposition that makes for an intriguing listen. On an album that’s constantly shapeshifting ‘A Random Act’ is a pleasing amalgamation of electronic and organic instrumentation and the result is very evocative. The natural successor to Iggy’s ‘The Passenger’ it finds Jim taking the listener on a pillion ride through a cityscape whilst providing a running commentary that highlights the minutiae of modern life (“Put yourself in his shoes, New Balance, Black”).

Never an artist to hark back to a mythical past ‘The Summer Of No Touching’ and ‘Song For The Unsung’ place Jim Bob directly in the present. Of course, that could render the album old before its time but, as these two tracks are overflowing with effervescence, I think that’s highly unlikely. ‘Men’ is encased behind an impenetrable wall of guitars whilst ‘Evan Knows The Sirens’ is angular and spiky and marches from speaker to speaker like a riot squad. It sets things up nicely for the penultimate ‘The Loneliest Elephant’ which, by contrast, sounds absolutely massive and, despite being rather sparse, employs the full dynamic range to become, quite literally, the elephant in the room. It’s a haunting track that, along with brief closer ‘Who Do We Hate Today’, ensures the album ends on a rather ominous tone.

By focusing on contemporaneous events Jim Bob has produced an album in Who Do We Hate Today? that is not only for our times, but for all times. 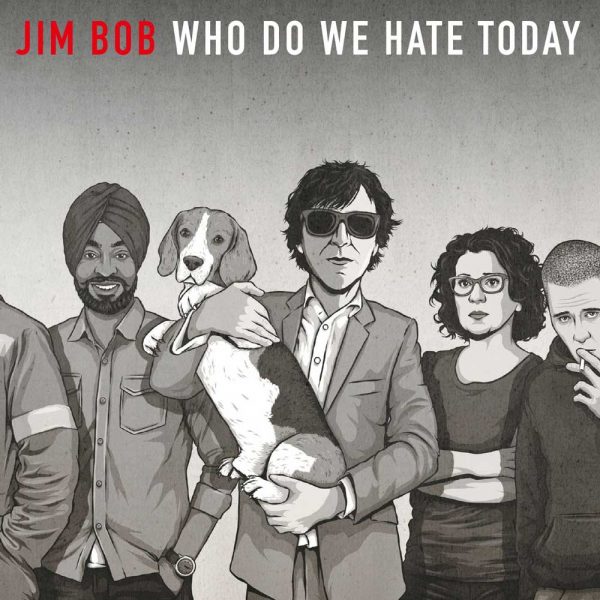