Country-crossover sensation Jessica Lynn is thrilled to announce the rescheduled UK dates for her headline tour ‘The Lone Rider’, much to the delight of her fans.

Her rescheduled 12-show tour will now take place in May 2022, starting on 9th May, 2022 (at St Pancras Old Church in London), take in a dozen UK venues (including shows in Wales and Scotland), then end in Norwich on 22nd May (at the Waterfront Studio). See Jessica’s website for full details of the new dates and venues. N.B. All tickets remain valid.

Jessica’s original 2020 headline show: The Lone Rider Tour should have hit the UK in June 2020. Sadly, due to the pandemic, like many live touring artists –she had to postpone her tour.

Jessica’s many UK fans sent many messages of support, appreciation and love, hoping to see her when she next became able to tour over here. Now, Jessica is delighted that new dates have been set up.

“As sad as I was… for our cancellation,” said Jessica, “I have been able to connect with everyone over in the UK via my livestreaming performances and have made so many new friends along the way. I cannot wait to see you all and will work on an even bigger and better show in the meantime, as well as releasing new music for you.”

“I am so incredibly happy to have been able to reschedule my UK tour to next spring,” adds Jessica, now the new dates can be announced, “Although it has been devastating not being able to be on the road, I have become so much closer with my UK fans through my weekly livestreams during the pandemic. I am really looking forward to seeing everyone in person and sharing all of my new music, especially my new single coming soon, ‘Roadhouse’. I am anxiously awaiting the trip!”

Jessica Lynn is well-known Stateside for the spectacle and quality of her live shows and stagecraft, and her TV specials, as well as the energy and excitement of her performances.

She has often been called “Shania’s natural successor” and described as “America’s new Country Music Sensation”. Her music does indeed appeal to fans of Country, Country Rock and Americana, yet it reaches further afield to wider Rock-loving audiences. Proof of that was seen and heard when Jessica played Ramblin’ Man’s Outlaw Country stage back in 2017 — her first performance at a Rock festival —where her cover of AC/DC’s ‘You Shook Me All Night Long’ had the whole tent rocking, as did her own songs and stagecraft!

Check out Jessica’s website www.jessicalynnmusic.org for full, and up to date, tour details and tickets, and grab a chance to experience for yourself what reviewers have justly called “an arena-sized spectacle in an intimate setting.” 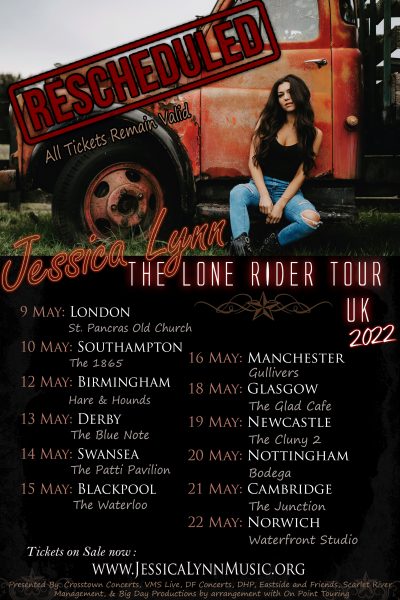