It’s been 30 years since Jeff Lynne last played his home city of Birmingham; a brief but show stealing set at the charity concert ‘Birmingham Heartbeat’ in March 1986. It’s been 35 years since ELO fans – including a very young me – battled their way through Arctic conditions to see the band on their Time tour. As great as those nights both were they don’t even come close to this magnificent, joyous celebration of ELO’s legacy at the Genting Arena.

Supporting ELO on this tour are The Feeling, a fine band and a headline act in their own right. The band had some of their own fans in attendance but many of the neutrals in the audience warmed to their pleasing pop/rock style too. By the time their set concluded with ‘Love It When You Call’ The Feeling had sections of the audience up on their feet and clapping along and you can’t ask for more than that from a support act.

Jeff Lynne is to me what Lennon/McCartney are to so many others. His songs are the music I grew up with, part of my musical DNA. Opening with the majestic ‘Tightrope’ followed by two further classics in ‘Evil Woman’ and ‘Showdown’ the evening is a celebration of Jeff’s peerless back catalogue of songs. The set list is an embarrassment of riches. It is no exaggeration to say that you could choose any song as a set highlight. It was that good. For me though, as a fan, it was the little moments that made this night special… the exuberant ‘All Over The World’ reclaimed from the much maligned Xanadu soundtrack, the reference to Shard End in the lyrics given special resonance for a homecoming gig in Birmingham; ‘Secret Messages’ – the title track of the double album that never was – performed live in the UK for the first time on this tour, the achingly gorgeous ‘Stepping Out’ from Out of the Blue given its moment to shine, a trippy ‘10538 Overture’, the band’s first single, harking back to their early progressive origins.

Retaining only Richard Tandy from the original line up Jeff has assembled a versatile and talented 12 piece band around him that does justice to the classic, expansive ELO sound, whilst lasers, projections and a huge, circular Pink Floyd-esque computer generated backdrop provides the high end production values that ELO’s sumptuous soundscapes have been crying out for. Here at last, at long last, is ELO’s music presented as it should be!

The show builds up to a superb finale, starting with a joyous ‘Shine A Little Love’ and culminating with a positively euphoric ‘Mr Blue Sky’: the Birmingham City FC logo projected onto the stage a nice touch, even for a Wolves supporter like me. The delight amongst the audience was tangible as they sang their hearts out to one classic track after another. Jeff seemed genuinely surprised and touched by the crowd’s reaction saying “It’s so wonderful to come back to your home town and have such a brilliant reception”. 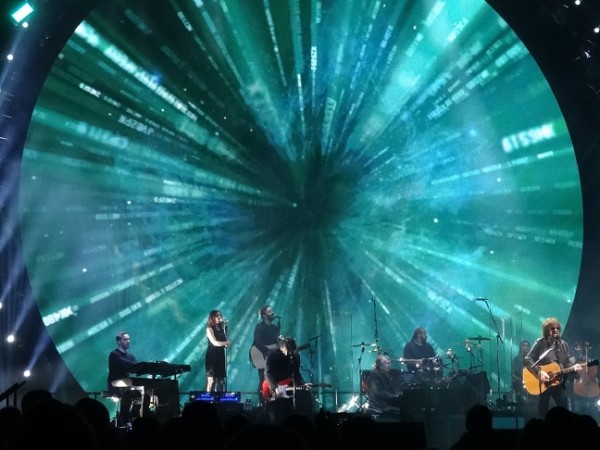 As I left the Genting Arena people were using words like “brilliant”, “awesome”, “amazing” and “fantastic” to describe the show and they weren’t wrong. A night of brilliant music and an astonishing spectacle, the like of which I never thought I’d see. Quite simply, one of the finest concerts it has been my good fortune to witness.