You may not have heard of jazz pianist Milton Keanes but you’ll know his music. If you were a beatnik in the heady days of the late 60’s, Milton was the cat. His band, Jazz Sabbath, were at the vanguard of the new English jazz scene. However, just before the release of what would have been their debut album (on 13 Feb 1970), Keanes suffered a massive heart attack and was hospitalised.

His record company, fearing that a band without it’s visionary leader would be a financial liability, shelved the album, permanently. Keanes, on leaving hospital in September of 1970, found that an opportunistic Birmingham band, named, conveniently, Black Sabbath, had released two albums of what came to be known as “heavy metal” – their songs sounding remarkably similar to Keanes’ compositions. Now, finally, with the discovery of the original master tapes, Keanes has the chance to finally set the record straight.

So, to the albums. It’s all here. The tunes, the melodies, the chords, the riffs. But it’s played (for the most part) by an acoustic jazz trio (piano/drums/double bass). It’s prettier…jazzier (obvs).Hell, even the titles are unchanged.

‘Rat Salad’ is beautifully recorded and played, containing some lovely warm bass work. It’s also fascinating to hear a jazz rendition of what became one of the archetypal rock drum solo’s and, of course, Bill Ward was hugely influenced by jazz drummers…this all begins to make sense.

Ozzy and co. retooled and reinterpreted the melodies of ‘Iron Man’ very cleverly. This version is massively slowed down, stretched out and prettified (is that even a word). It’s elegant, sophisticated. It’s a ballad, a lament..until about 4 minutes in when it takes off, daddio. Keanes hands fly across the keyboard with finger poppin’, shade-wearing elan.

Electric guitar makes an appearance during ‘Hand Of Doom’, it’s quietly epic solo redolent of Grant Green. It reappears, along with saxophone and Hammond organ, for an almost big band reading of ‘Children Of The Grave’. The edges are smoother, the vibe more Georgie Fame than Tony Iommi but hey, the groove is still there!

Rock fans may struggle with this, it absolutely IS jazz! But then again, it’s not like we haven’t got extra time on our hands at the mo…give it a go, you might just like it. I imagine it will be a curio, a folly for most rock fans, an interesting diversion, hearing these beloved songs in a totally new setting. It’s well played jazz. Are you a total non jazz person of a certain age? Remember the background music to the old Charlie Brown/Peanuts cartoons? Now you kinda know what to expect. But let’s allow Mr. Keanes his moment in the sun.

Note: at the time of going to press, any rumours that Milton Keanes is actually Adam Wakeman, long-time live keyboard/extra guitar player for Black Sabbath and Ozzy and that this is all an elaborate hoax are completely unfounded… 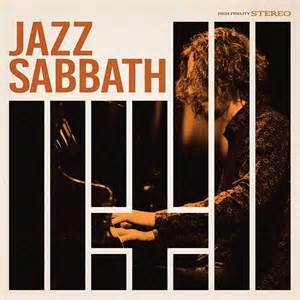