Conceived to mark the landing on Mars of N.A.S.A’s Viking 2 Explorer on 3rd September 1976, Jack Lancaster and Robin Lumley had previously collaborated, notably on a rocked-up version of Sergei Prokofiev‘s Peter And The Wolf, as a sound score for a film that didn’t get made. This recording tends to be viewed as the gathering of Brand X, prior to their actual being, and subsequent rise as the UK’s leading jazz rock band (just as punk rock was waiting round the corner to mug any musos passing by). In fact, the principal players knew or had played with each other previously. This is outlined in the extensive and often fascinating booklet, written by the recently deceased Malcolm Dome, and to whom the release is dedicated.

However, if you’re coming to this expecting explosively hot-rippling fusion material, it’s not what you’ll find, though there are moments where you hear the possibilities that will come to be. Fretless bass player Percy Jones unmistakeable sound is there but far from omnipresent, recently deceased guitarist John Goodsall veers towards melody rather than molten bursts of solar fire, rather what is significant are the drummers: Bill Bruford’s not present on this one, but Phil Collins is – and it’s him I presume playing the various rolls round the kit, whereas Morris Pert feels more present in the mood and arrangement of various pieces. Rounding out the Brand X connection, is one half of the composers, keyboard player Robin Lumley.

A second cousin to actress Joanna Lumley, it tends to be forgotten he played keyboards with David Bowie & The Spiders From Mars, while developing a career in the session world, and latterly became a producer. His associate in this, and their previous venture, has held a similarly varied music career, whilst Jack Lancaster is also able to lay claim as a co-founder of Blodwyn Pig, with whom he played various woodwind instruments and sang. The latter role is diminished here, but the violin and a water-gong (Sorry, I leave it those better than I to reveal on which tracks) are added to his musical chops here.

Of what I’ve heard of the previous The Rock Peter and the Wolf it’s all a little too obvious. Among a variety of guests on that are Gary Moore and Jon Hiseman, so it might be said to have some bearing on the foundation of Colosseum II, but Moore wasn’t up to doing his best Jeff Beck impersonation yet back then.

Marscape was a wholly new work by Lancaster and Lumley. How different this remastered version is compared to the original I’m unable to say. That ever-reliable source of information, the internet, suggests the original cover, or a previous reissue, might have featured the infamous Face on Mars as its cover – a photo taken by Voyager 1 that lead to a lot of interesting crackpot theories, subsequently disproved, unless you believe we never landed on the moon either (We did, we came back from swimming at my junior school to see it on a b/w telly. Honest, hands-on-my-heart). This edition also features two single edits of tracks featured on the main album, presumably two sides of a 7” single, probably for radio use to gain interest in the main record rather than commercial sales I’d have thought, and as individual tracks that way, a little shorter, they do tend to add more impact.

However, it’s overall that this record is intended to be heard. An aural experience, for the most part gentle, some enjoyable noodling, and a few jazz rockers. To some degree it falls between the hills and vales of Gong’s You album (less hippy-dippy rambling, more musically focussed), a touch of ambiance-in-the-making and Deodato’s ‘Also Sparach (2001)’ without the proto-disco elements.

The track titles are self-evident of the themes pursued, from the obvious ’Take Off’ onto various journeys, explorations and a seeming epiphany or tranquillity found in the final track that is ‘Realisation’

For ‘Take-Off’ a synthesiser issues a long note, then something assimilating a bowed double bass or cello intrudes mildly before tinkling keyboard notes offer mild anticipation, merging into the faintly Oriental sounds of next track, ‘Sail On Solar Winds’ that’s like a serious version of The Clangers children’s TV show theme then becomes an ever more spirally prog-fixated piece with jazz rock drumming and squeaky electronic noises bouncing in and out, the kind of pleasant noises Ozric Tentacles would latter develop. While cosmic-y there are some deft chord and short progressions that are decidedly of the classic US jazz rock variety.

Next, ‘Arrival’ proves to be a predominantly ethereal but short piano piece, and then we really get the ball rolling with ‘Phobos And Deimos’. Here there are swirling keyboards, while an almost Celtic melody plays over military precise drums before ricocheting off with the “pouts” and “pings” of Jones’ bass amidst a melodious jazzier work with great sweeps of sound and “oohing” vocals near the end, delivered by one Bernie Frost. ‘With A Great Feeling Of Love: Inner Warmth And Feelings Of Affinity’ is a long title for a rather short tune. Church style organ played slowly infers the gravity (no pun intended) of the emotive forces intended, and the saxophone played over a string arrangement sound might be described as easy listening in feel but it works remarkably well, with the slightest of eeriness to help carry it through. Slower, suspenseful explorative piano follows on ‘Marscape’ with what sounds like either pinging plucked piano strings or guitar (but could be Simon Jeffries on koto), amid effects and faintly rumbling percussion.

‘Olympus Mons’ is a rolling jazzy-funk rock tune with a great lolloping bass line, brass section punctuations and a sax soloing freely over the top, all in its first minute. Then a gong bongs loud but once (Lancaster’s water variety?), a piano plays semi-classical scales alongside moaning voices and percussion, only for another couple of minutes later what sounds like something hefty falling over in a scrapyard. What follows then is the most atypical jazz rock piece on the record, and if there’s a section, if not complete piece, that heralds the coming of Brand X it’s this rather bracing section, with notable sterling performances on guitar, bass and drums.

With ‘Homelight’ a keyboard playing in the manner of Genesis ensues, but the fretless bass is from decidedly elsewhere, then certain chord changes are played more in the style of Max Middleton. We also get acoustic guitar and another Oriental stringed melody. This is both evocative and pretty and gets another big thumbs up.

Bass or synthesiser plays a waddling line, over which a cod-reggae or ska-lite tune plays over on ‘Hopper’ – The overall impression is that it could slip into the soundtrack to Pixar’s 2008 animated sci-fi movie Wall-E film or even some silly 70’s British comedy film while characters get up to stuff and nonsense, we also have some more Clangers-style sounds. The overall impression is this track is well intentioned session work, with Goodsall playing a couple of intricate, highly impressive pieces, but the tune overall too preponderous. The single edit of this proves more succinctly satisfying.

‘Dust-Storm’ a gathering of sounds: intermittent wind and percussion, mechanical scraping and squiggles here and there, the odd “plick-plack” emitted, with speedy tumbling drums entering orbit and a very 70’s spacy sounding synthesiser whirling all over the place before retreating back into silence. ‘Blowholes (The Pipes Of Mars)’ has long tubular horns, pipes or organ playing a wobbling could-be-drunk fairground melody, again falling in Wall-E territory, but then a more earnest melody ensues, rather akin to Herbie Hanckock’s ‘Water Melon Man’.

Heavenly sounds of what appear to be female harmony vocals (but the booklet stares Frost as sole vocalist) range over a piano refrain, into which a mildly parping bass interjects as we near conclusion with ‘Realisation’. Then, a minute and a half in a sense of danger or at least urgency is felt as the tempo increases with chord changes and melodies heard over the course of the album previously appear to return in reprise. A peaceful resolution rather than conclusion, is coming as what could be koto and guitar play in backing refrain s Lancaster’s flute solos gently into the great beyond.

An album certainly of its time, but when heard as a cohesive complete work most suitable background music, with the ear drawn to the various intricate melodies that flitter in and about One suspects great big whacking speakers on with a suitable sound system is the best way to listen to this remastered edition of Marscape. A musical curiosity, but not one that does not go down a cultural cul-de-sac, and if given a listen in the way it should be, grows in appeal with this listener. 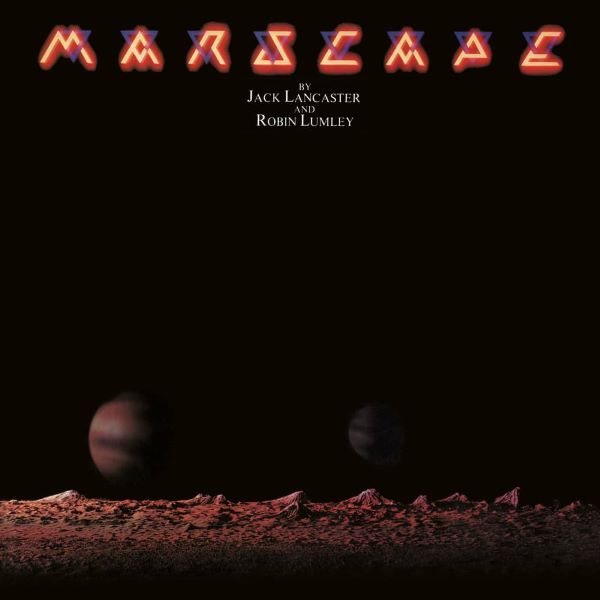