No, don’t worry, you haven’t inadvertently time travelled back to 1987 (in a DeLorean, obvs), it’s still 2021…unfortunately. Someone may have to let Jac Dalton know though.

So, if you’re not familiar with the awesomely coiffeured Mr.D, he’s a Southern gent who decamped to Australia some time ago and plies his rocking trade over there, His latest release, ‘Tempus Fugit’ is a greatest hits, a career overview. So, if you’re new to Dalton (as I was) this is a pretty damn good place to start.

At first I wasn’t sure. The album has been put together chronologically and the first few very early tracks are a tad raw. The production is weak, the musicianship basic but effective and the songs fun but very generic – 80’s generic, there is talk of “iron curtains and cold wars”. Not really being aware of Dalton, I was convinced that he genuinely was an 80’s also ran – big enough for a greatest hits but not quite big enough that I’d heard of him – I figured he was probably big in Germany.

‘Fire Burns’ introduces the obligatory sax solo and a duet (A la Meat Loaf) with an unnamed female singer. How do you cram that many mullets into a small studio? But then we hit ‘For Your Love’ (see above video) and things move up a level. The sound is bigger, the production more professional, there’s more depth and texture – piano and acoustic guitar are thrown into the mix. It’s still fairly generic 80’s melodic rock but it’s been dialled up a notch and, above all else, it’s fun. Dalton and co. are off and running now.

‘Good To Go’ is catchy and lightweight. There are synths in there and it’s in the same ballpark as Bryan Adams and John Cougar. ‘Just Enough To Believe’ (yes, just from reading that title you know what it’s going to sound like) is cut from the same cloth. Carried along by towering keys and smooth powerchords, you’ll have heard all this before but in differing configurations…but it’s no less enjoyable for that. It’s a mega mix (remember those?) of all your mid 80’s rock albums. Hell, it even namechecks ‘Jessie’s Girl’.

But fear not, there’s no shortage of RAWK either. ‘Hardcore Superstar’ is a rougher, gnarlier affair, Dalton sings of “coke and penthouses” while the riffage recalls Corabi-era Motley Crue, it drops out into a nice Bad Company style outlaw bit too. ‘Locked, Cocked & Ready To Rock’ sounds exactly as you’d expect while ‘Powderkeg’ ramps up the FX and synth guitars. There are hints of Saxon to this paean to life on the road – “we’re here to rock ‘n roll” yells Dalton. A rock song with no hidden depths or ulterior motives. A rock song for it’s own sake…and there’s nowt wrong ‘wi that.

‘One Heart, One Land’ is a fist-clenching American anthem, an ode to the badlands and open plains of, well, wherever you are. It’s wearing a stetson and riding a Harley and living it’s best outlaw life, clearly planning to go down dead or alive in a blaze of glory.

Which brings us to the covers. ‘Sweet Emotion’ is dispatched with maximum crunch and slightly less sass and snap than the original which brings us to…’Wanted Dead Or Alive’ – well, it had to be here didn’t it. It’s as epic as you’d expect and even has a nod to his adopted homeland, there’s definitely a didgeridoo in the intro!

We finish with ‘When I’m Alone With You’ which rocks very nicely indeed. Gravity seems to be getting heavier on planet Dalton. So there we are, a great 80’s style artist who you really should investigate if that’s your kind of thing. He won me over, what started as derivative and generic gained character and class style and is a great, uncomplicated, heartfelt collection of melodic rock which tips its hat to those innocent, hairspray-coated days of spandex and tassled suede jackets. Party on Mr.D, I for one will be waiting for what’s next. Recommended. 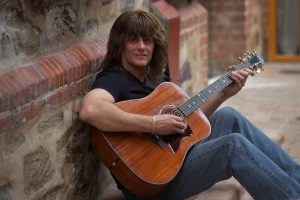