Famed for his genre-bending sound Texan Israel Nash is one of those rarefied artists who are difficult to pigeonhole. Drawing heavily on all things Americana his sixth album Topaz finds Israel scaling new heights and should finally wake the masses from their slumber and convert them to his musical charms.

‘Dividing Lines’ is the sublime opener with a luxurious sound that slowly wraps itself around the listener like a warm blanket. A tumble weed gently rolling over golden sands it takes on new matter and becomes multilayered and all encompassing. It’s a laid back slice of Americana featuring slide guitars and pulsing drums that soon includes gospel harmonies and a brass section. But don’t take Israel’s laid back delivery as resignation; there’s a dark lyricism floating atop that creates an interesting dichotomy and it’s one which reverberates throughout Topaz. Biting commentary on the perilous state of humanity jars well with the haunting music which builds to a crescendo and drowns Israel’s lone voice within a musical tornado.

Now residing in Dripping Springs, Texas (via Missouri and New York) Israel Nash has absorbed a lot of his current location into his sound. Take a track like ‘Closer’ for example which captures the essence of blazing red canyon beneath an azure sky as it drips with cascading guitars. The production on Topaz is a real boon; it’s wide and expansive and places everything on an even keel, bringing certain instruments to the fore at specific moments and receding others creates a sense of motion that’s cinematically widescreen. Factor in a voice that’s medicinally soothing and you have an album that’s simultaneously easy on the ears and thought provoking; dig beneath the soulful sound and luscious harmonies and you’ll find serious musings.

Israel Nash is an artist who defies easy categorisation but I’d draw direct parallels with Gold Rush-era Neil Young. Drawing on a vast spectrum of sounds Topaz is an album upon which no two songs inhabit the same sonic sphere yet they hang together as a cohesive whole. From the haunting, harmonica driven ‘Canyonheart’ to the whimsical, masculine nature of ‘Sutherland Springs’ this is a record that knows exactly where its going, but it does take some interesting detours. ‘Pressure’ is our final destination and we arrive with a confident swagger, it’s a call to arms that unfurls like a multicoloured flag and brings the album to a defiant, if not confrontational, conclusion. 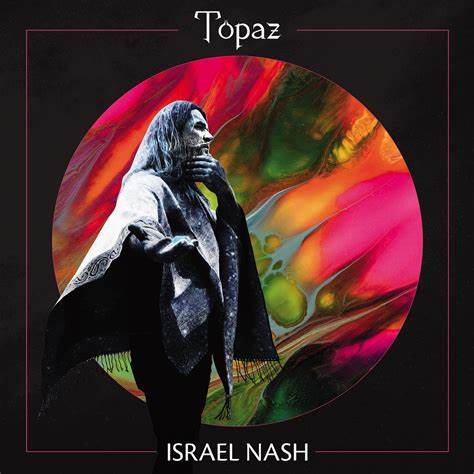