Why Belgium’s Iron Mask have never entered power metal’s top tier shall remain a mystery. Formed in 2002 the inevitable line up changes seemed to have stunted their progress somewhat but with new vocalist Mike Slembrouck adding his talents to their seventh offering Master Of Masters Iron Mask seem set to enter the premier league.

After the briefest ambulatory prelude ‘Never Kiss The Ring’ arrives as if a thunderclap cracking a northern sky. This is unadulterated power metal that’s full of neo-classical flourishes and close vocal harmonies that raise the listener up with waves of joyous metal. Powered forth by Rami Ali’s deft drumming ‘Never Kiss The Ring’ swirls like a tornado and has a dizzying effect as the instrumentation flits from speaker to speaker. Swapping speed for power ‘Tree Of The World’ is something of a bruiser that melds guitar virtuosity to a mediaeval template meaning the past and future collide with force.

‘Revolution Rise’ is a timely call-to-arms that seems tailor made for our troubled times. I’ve never been a fan of politics in metal but Iron Mask have found a happy medium by marrying dark lyricism to equally weighty music. ‘One Against All’ is the stuff that rock n’ roll dreams are made of and paints a vivid picture by using huge, sweeping strokes. New vocalist Mike Slembrouck has confidently put his stamp on proceedings and throughout the album his vocals soar majestically and with confidence.

The production on Master Of Masters is simply humongous: it’s full on and in-your-face which is the way a power metal album should sound. Clocking in at over 9 minutes ‘Nothing Lasts Forever’ is a musical tour de force that shape shifts over its duration and takes on new forms as lightning-like noodling nestles next to warlike drums over which Mike’s voice sails as if a longboat over stormy seas. Sometimes elongated songs can seem forced and laboured yet ‘Nothing Lasts Forever’ passes in the blink of an eye as we get wrapped up in the bands haunting sound.

Atmospheric and grandiose ‘Dance With The Devil’ is a power ballad of sorts that acts a foil to make the following ‘Wild And Lethal’ even more explosive. The perfect driving song it’s made for cruising a nocturnal cityscape in the finest sports car. ‘Mist Of Loch Ness’ is a monstrous tune that entwines the listener with its smoky tendrils and rises from the deep like old Nessie herself. ‘My One And Only’ chugs along with a mighty riff and crystalline solo and, on an album that ebbs and flows perfectly, precedes the soulful and bluesy ‘A Mover Loved Blue’.

‘Sagittarius A’ is a haunting instrumental that segues into epic closer (and title track) ‘Master Of Masters’. Pulling all the strands together it’s a monolithic beast that features soaring vocals and intricate guitar lines along with choral chanting which all combine to create an all-encompassing listen that’s curtailed to an ominously tolling bell which makes the silence that follows all the more deafening.

Following the Diabolica album by four years, Master Of Masters was certainly worth the wait and finds Iron Mask continuing on an upward trajectory. Masterful. 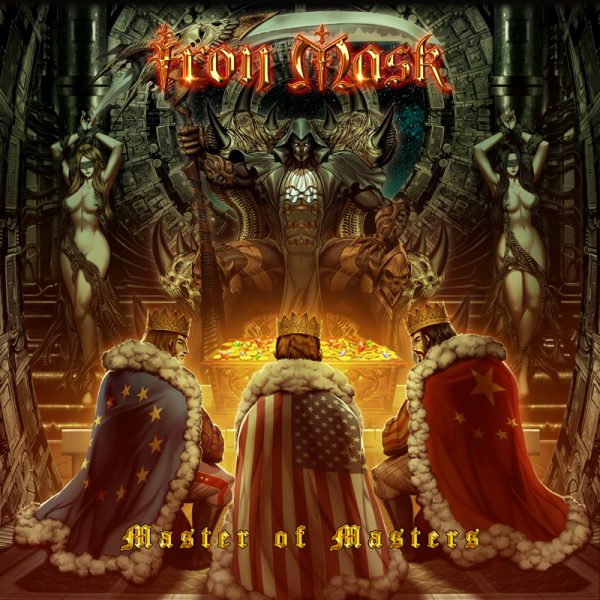