Iron Lamb are a band that proudly display their influences. No denials or elephants in the room for these Swedes, they love their old school heavy metal and they’re going to shout about it from the rooftops (or the stage).

A wah-wah lick, an intro that speeds up and a big feckin’ NWOBHM riff – we’re off! There are nods to Metallica, Maiden and, most definitely, Motorhead. It fairly careers along, borne aloft by wave upon wave of twin lead guitar and widdly solos…however many guitarists are in the mix here, they’re all getting a fair crack of the whip(lash).

And that’s pretty much what you get for the rest of the album. ‘Bound By Gravity’ continues the Lemmy-fest but adds tasty side orders of Priest and Saxon. It’s turbo-charged solo drops out into a moody, echoey segment before boom! We’re back into the riff.

‘Into The Night’ (see above) will transport anyone of a certain age straight back into the 80’s, but in a good way, while ‘The Hunt’ is huge, urgent, thunderous stuff – propelled by Phil Taylor style kick drumming, the band race to the finish line, booting aside gnarly chords and screaming solos as they go while simultaneously abusing the volume controls. It’s sterling stuff and ends with a suitably big finish. Kerrang!

‘Erase Rewind’ follows up with a bruising uppercut, it’s grubby keys and droning proto-punk motoric riff brawl it out to a stunning conclusion. And on it goes, crunched out NWOBHM with lots of unruly guitars. The rhythm and lead play off each other very well, creating a glorious noise. Riffs continue to be powerful and sassy and there may even be a hint of cowbell in there somewhere!

Finally we’re taken back to the 80’s for a track that manages to be both an affectionate homage and a kickass song in it’s own right. Hammond organ swirls around a fabulous riff in another potted epic that conjures images of sleeveless denim jackets (patches, naturally, sewn on by your mum), greasy hair, studded wristbands and bottles of Snakebite in the local park…or is that just me?

Whatever, this is a great album. Raw, direct, no nonsense and born to be played live in a dive near you. Iron Lamb clearly grew up listening to a great Brit metal soundtrack and ‘Blue Haze’ can sit proudly alongside any of it. 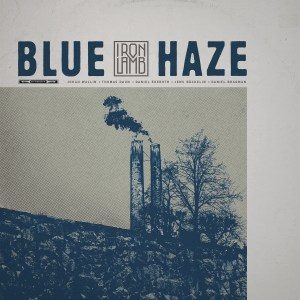