Iron Bonehead Productions is a favourite amongst these ‘ere pages (click here for a list of our reviews).If you want to find out more about the label, you can pay a visit to their website, take a listen over at their Soundcloud page, or get up-to-date info on their Facebook page.

In the meantime, we’ve got four more releases being given the once-over. Read the lot or click the band names to go directly to their review.

A split between two of New Zealand’s nastiest, ‘Ossuary in Darkness’, Vassafor’s one original track on this release, is a sinister and unsettling piece. Opening with slow chords echoing across the void, from here on in, Vassafor’s mastery of atmospherics and intense savagery is at the fore and when the track shifts into black metal barbarity as it approaches the three-minute mark, its all-consuming fire takes over completely. And with the vocals delivered in long gurgling ejaculations, that they are lower in the mix than the other instruments and veiled by effects makes them all the more menacing, augmenting the dark and atmospheric depths of the track. At almost fifteen minutes, this could easily fall apart at any moment, but it’s testament to Vassafor’s combined musicianship and song-writing skills that its hold is maintained throughout and its landscape is that where light goes to die. And though the cover of Varathron’s ‘Son of the Moon’ is very good (and could’ve been saved for a bonus track on an album perhaps), I’d prefer to have heard more original material from this ‘orrible ‘orde. 8 out of 10

Sinistrous Diabolus, with their three-part, twenty-one minute track, have delivered something with such depth that it’s difficult not to succumb to its command. Hypnotic and haunting, Sinistrous Diabolus drag us deep into a barren and scorched landscape, one which is as oppressive as it is infertile. Their blackened devastation into is a tortured one, sometimes slow and brutal, at others rapid and ruining, this plots an arduous and absorbing path, one that is at all times intense and harrowing. 8 out of 10

Good luck finding out anything about Swarþ. Who are they? Where are they from? When did they form? What upon this pretty planet do they look like? All questions that are to remain unanswered, I’m afwaidy waidy. They don’t even name the tracks on their releases ferchrissakes! All that can be said about this band is that they make blackened death metal that is top quality. Dense, intense, and darkly imposing, Swarþ combine the blackest and deadliest of riffs with near-impenetrable atmospherics to create a simultaneously bleak, chaotic, and ritualistic sound. A collection of all of the material from their eponymous 2012 demo, from 2013’s Tayl is Deeþ Þurgh Þyn Envenymynge, and from 2013’s EPMors Rex Salvator Hominum, this is to be released as a gatefold double LP limited to 500 copies. You might want to get hold of it quickly.

Formed in 2001, their first demo appearing in 2004, ten years later and the first full length from Chile’s Demonic Rage has arrived. With fourteen releases to their name already – seven demos, four splits, one EP, and a compilation – it’s safe to say that Demonic Rage have had a long time and plenty practice to refine their sound. It’s also safe to say that despite not being original, as far as songcraft goes, they’ve got it nailed. As you’d expect with any band summoning all that death metal has bestowed upon us over the past thirty plus years, there are more than a few occasions when déjà vu rears its head but Demonic Rage have delivered a powerful death metal album that though not without flaw, is brimming with the commitment and authenticity that fueled the genre’s originators efforts all those years ago. 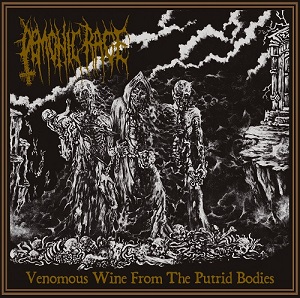 Chiming in at thirty three minutes, the debut full length from bestial black metal duo Sacrocurse is exactly what you’d expect from such a band. Fast, barbaric, and brutal, their chaotic wall of sound is ruthless and unyielding. Belligerent and uncompromising in both design and delivery, Unholier Master is as heavy, crushing, and intense as it should be. With ZK’s rabid riffs and LZ’s frenetic drums blasting their relentless wrath and ZK spewing his inhuman toxic bile, the charitable little devils do occasionally drop in a heavy groove that adds enough variation to the album to stop the blur of rampant riffs and relentless rage destroying you completely, bless ’em. Malicious and brutal, this is well worth bothering the neighbours with at ungodly hours. 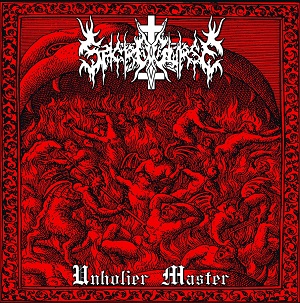