For more about Iron Bonehead, you can pay a visit to their website, take a listen over at their Soundcloud page or their Bandcamp page, or get up-to-date info on their Facebook page.

Read the lot or click on the band name’s above to go to their reviews. Ready? Right, you go first. It’s dark in there…

Albez Duz – The Coming of Mictlan

Formed in 2006 with their eponymous debut appearing in 2009, five years later and German duo Albez Duz have returned with another orbit-shifting slab of their occult doom rock, the album taking its title from the nine-levelled underworld of Aztec mythology.

Where the first four tracks (side A of the vinyl release) are swathed in darkly gothic atmospherics, down-down-deeper-and-down doom tempos, and elongated riffs, the remaining three (side B) dwell in a different aspect of the band’s dark worship and save the album from becoming a drably repetitive affair. The acoustic guitar-led ‘Drowned’ is coloured by a late 60s/early 70s Rick Wright-like organ that augments the fragility and mystical wonder of the track. Bringing with it a sense of both urgency and power, ‘Servants of Light’ shifts the tempo up for a comparatively brief shot of aggression before returning us once more to the doom and gothic gloom of the magnificent closing track, ‘Twist In My Sobriety’.

Comparisons with Paradise Lost, My Dying Bride, and even Pink Floyd are inevitable, and with Alfonso Brito Lopez’s ominously ball-shatteringly-baritone vocal delivering the seven sermons, so are those with Peter Steele and Type O Negative. But, comparisons aside, with a religious atmosphere to it, there’s an understated grandeur to the record, one of humility in the presence of the forces which the devout duo revere. Heavy, dark, and majestically sullen, The Coming of Mictlan will have you yearning for the ignorance of a Christian fundamentalist as they drag you into the inescapable depths of transcendent truth.

If like me you’ve not come across Matyrvore before, that’s probably because Malevolent Desolation is their first recording in seven years. So, with Reaper in charge of vomiting, Necrochrist on duty for Deathsaw Annihilation, Hellvomit providing the Atomic Roar of Hades, Terrorizer assailing us with Divebomb Attacks whilst on Bazooka, and Gemini bashing away with Thermonuclear Hellhammers, I’d say it’s fairly easy to guess what you’re going to get: massive, messy, and merciless destruction.

A ruthless recipe of black, death, thrash, grind, and whatever blasphemous and bile-riddled filth – all in no equal measure – they can get their vicious hands on, this is ugly, hostile, aggressive, abrasive, etc etc etc. There’s no master plan, no goal, no purpose, just a need to produce as much devastation in as short a time as possible. Bookended by two brief but no less effective atmospheric pieces, the slaughter commences with ‘Masaya’, a three and a half minute blast of barbarous and gnarled riffs, gruesome chord progressions, a diabolical lead, and a savage vocal line.

‘Global Annihilation’ next and in just ninety seconds – the first thirty five of which are the sounds of guns, explosions, and a screaming populous – Martyrvore deliver the war directly to us in all its horrific glory. From ‘Crush the Seals’ (I’m unsure if they mean the swimmy type or the navy type) through the wall of noise ‘Perversion Rites’ into the yawning hell of ‘Mouth of the Grave’ and the bleak savagery of ‘The Black…’, cacophonous, chaotic, and salivating like a colossal beast playing fetch with a nuclear missile, with six slaying and trenchant tracks between one and four minutes long, if obliteration was their goal, I’d say job done. 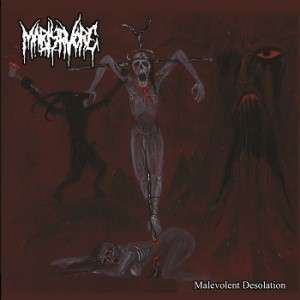 The third demo from German trio Khthoniik Cerviiks in one year, if Heptaedrone is anything to go by, the future of this band looks as promising as this is fucking intense. A dark and sinister ‘…Exhalation’ for a two-minute intro, we are cast deep into the quagmire of the apocalyptic, the decadent, and the decaying to witness the brutal and unremitting aggression of death and the cold and callous ire of black metal go head to head to forge a bestial blitzkrieg of unyielding savage bestiality. With a slew of riffs rougher than a rhinoceros’s razor, a vocal heavier than the beast’s first dump of the day, the bass farting its diseased fart from its mangled low end, and the drums clattering and crashing their way through one unhinged passage into the next, Heptaedrone is unmitigated hatred.

Primitive, raw, and maniacal in its attack, ‘The Grand Sidereal Swindle’ storms its way across the war-torn landscape spitting out shredded melodies, belligerent riffs, raucous drumming, and a slavering vocal. Despite daring to drag the tempo down partway through, though ‘Colliding Spheres Bend Solar Years’ (what a track title!) suggests that Khthoniik Cerviiks have a formula – albeit a chaotic one – that they will stick to, ‘Elektriik Redeemer’ rears its ugly head and blasts everything to bits with its unpredictably decimating structure, erratic progressions, melodic riffing, and frenzied lead work. Suffice it to say that from here to the near-ten-minute closing track ‘Moraines Of Molten Light (Khthoniik Cerviiks Inhalement)’, Heptaedrone pukes out surprise after savage surprise. It’s the album that just keeps on giving. That four of the tracks are from the first two demo releases suggests that an album may be on the way sometime soon. Be afraid. Very. 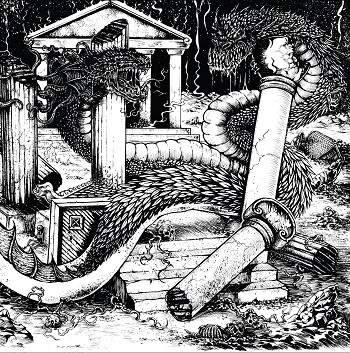