“…a straight hate towards every living shit in this fucking world”

Jason: Thank you very much for taking time out for this interview. The Parasitic Survival of the Human Race is a great piece of work (Ed: reviewed here).

Wrath: Hails from Wrath! Thanks a lot Jason for your words.

Jason: Dodsferd’s works have been labelled as depressive black metal but The Parasitic Survival of the Human Race is very different in approach. The tracks are much faster with a distinct punk element. Why did you take this approach with this album?

Wrath: Dodsferd were never a depressive black metal band, neither a black ’n’ roll, or black punk band. I always had all these elements in my albums, my releases in general. Others had one of these elements in a small degree and others had it in a big degree (Suicide And The Rest Of Your Kind Will Follow, The Parasitic Survival Of The Human Race). I follow my own path and instinct; I never do what others expect me to do. In this release, this was how I felt. Dodsferd is the diary of my life. It’s a band that works for my personal propitiation and psychological stability. It’s not for the masses; it’s for the ones that have the ability to understand my vision and my philosophy.

Jason: Can you tell us about what you set out to achieve with the album? Did you have a clear idea of what you wanted for this record or did that evolve with the writing? 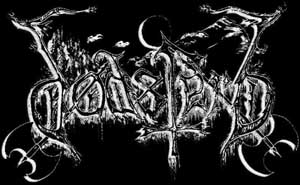 Wrath: From the beginning of the creation of this album, compositions, lyrics, recordings, I knew what I wanted to achieve with this album. The same goes for all of my previous albums. I know exactly what I am doing and what I want to achieve, which is my personal propitiation. All my feelings can be depicted on this album, in this certain period of my life.  If somebody follows the path of Dodsferd through all these years, he, or she will be able to understand it, since the release of my first demo, Kruzifixxion of Human Disgust.

Jason: The album features recordings from the Greek riots of February 2012. Why use them? Was it for sonic purposes or do the riots represent something more significant for Dodsferd?

Wrath: When a country is governed by incompetent ass lickers of Europe, things can only go worse! That was the situation for the last years. Parasites who lost their privileges due to this fucked up situation. All these riots set the basis for creating chaos. Only through chaos and destruction things can eventually change! The philosophy of my band has to do with chaos and destruction. It’s about uncompromising hatred towards every living fucker out there who thinks he can gain power through these weak masses, who thinks that he is smarter and he can do whatever he wants in expense of others. Through all these years of my band’s existence, I speak about these sub-humans. So these were the best realistic samples to accompany my music and my lyrics!

Jason: How did the band approach writing for The Parasitic Survival of the Human Race? Do you all contribute, collaborate, or bring ideas to the band for discussion and development?

Wrath: No, it’s something personal. I create the whole music, lyrics and set how the whole album will be. That will never change. Maelstrom, Nadir and Neptunus are like brothers to me. They are not just members in a band. They have fully understood my vision and my philosophy and they contribute with their excellent musical skills and ideas in drumming, lead guitars and bass lines. As I have written before, Dodsferd is my own journey, my own world. A diary of the path I have chosen to follow.

Wrath: There are no secret meanings behind the title of the album. Human leftovers and their parasitic behaviour has been my favourite subject through all these cursed years.

Wrath: It’s a band and a song that I like a lot. Dodsferd is for the few, is for the ones who are able to understand my philosophy and my vision. It’s not another black metal band that follows any kind of trends and fake images, in order to be followed by the masses that have also entered underground black metal.

Jason: The artwork is very impressive and distinctly different in style to your previous works. Who’s the artist? What was it about their work that drew you to him/her? And how much direction did you give the artist in its creation?

Wrath: My brother S.D. from Vision Black/Razorbleed Productions, created the whole artwork for this album. I just explained him how the artwork should be and he created it. He is for years supporting my band and finally we co-operated. I knew his work from the beginning. So I didn’t have to check any of his previous works.

Jason: How does the artwork represent or relate to the music?

Wrath: It depicts the whole world, under the sign of chaos and destruction! It shows a straight hate towards every living shit in this fucking world, who is trying to survive in the expense of the capable ones. The artwork represents the desecration of their ideals and the spread of the black plague upon them.

Jason: 2013 was a busy year for Dodsferd with a compilation, 2 splits, an EP, and 2 albums released. What inspired such productivity?

Wrath: I am inspired by my own demons! It has to do with my psychological stability. I have to take out of myself all these feelings that blind me from hate and confuse my thoughts.

Jason: Dodsferd have been making music since 2001. For you, how has the band evolved since that time?

Wrath: Philosophically nothing has changed. I am still composing and writing all music and lyrics and that will never change. The only thing that has changed is that we are a full member band now, ready to spread our propaganda live on stage.

Wrath: The true spirit of black metal will never be lost, as long as there are individuals out there who struggle for the continuity of it. Black metal was never for the masses. It was and still is an underground movement that will never care for the approval of others and especially of the retarded masses that have unfortunately entered the fields of it. It’s an uncompromising art for the few.

Jason: Are Dodsferd working on more material? If so, is it in the vein of The Parasitic Survival of the Human Race or more like your depressive material?

Wrath: This period I am in the middle of the recordings of a new album. It is not going to be in the vein of my last album and that’s for sure. I have also arranged a lot of other releases, like 7”EPs, Splits, this new album, so it will be another busy year for my band!

Wrath: Some live performances in Europe have been arranged so far for this year. Another tour in USA is also on my future plans. About UK, if there is an organizer who can arrange it, we would be honoured to come. Organizers can contact me through my e-mail in order to arrange it.

Wrath: Thanks for this interview. Nothing is external!!!

With Respect, Wrath from Dodsferd!