UK: If you want us to return – Get your ass together!

A sure-fire contender for the Best of 2016, Urfaust’s first full length in six years, Empty Space Meditation (reviewed here) takes the listener far beyond the realms of the mundane and deep into the disquiet and the tranquil. Here, drummer Vrdrbr gives MR’s Jason Guest an insight into the album’s evolution, inspiration and themes as well as the band’s development since its formation in 2003, their philosophy, and why UK audiences need to get their act together if they want to see them on these shores ever again…

Thank you very much for taking time out for this interview and congratulations on Empty Space Meditation. Your first full length since 2010, what did you want to achieve with the album?

Thanks for your kind words and your review! It is always nice to hear when people enjoy the tunes that we create for ourselves… This is a very egoistic band so to say: we do as we please and create what we want… and the creation of EMS was no exception to this! We didn’t have a real plan of how it should sound, but we had rough ideas and we worked them out and created some music that we would enjoy ourselves and basically stands for our journey… into Empty Space!

We have incorporated some new elements and sounds into our musical pallet and I guess we worked more “professional” than we did before: we put ourselves on a deadline, planned ahead… most of the time it worked out, sometimes it didn’t… but overall this recording process was another step forward in creation and learning how to deal with working under pressure, so let’s hope we take some knowledge along for the next recording sessions, hehe!

Musically and instrumentally, the album is very diverse. How did you approach composition for Empty Space Meditation?

Like we always do: one of us has some ideas and we see how they work out and create a song… it’s a bit like cooking: you have a standard recipe, with some ground basics… but it gets more interesting and tasty, when you start adding spices, herbs and flavours to it… or maybe even change up the whole cooking process itself! We just see where the song and the moment takes us: sometimes we plan to do a guitar only song, which ends up having tons and tons of synths layers added… the other time we want to create an epic song with all the trumpets and bells full on, but notice that the rawer version of the song works way better… so basically, best it to see where things go and have no expectations at all!

It took us 4 recording sessions down in the bunker, so basically around 5 or 6 nights I guess. It’s hard to keep track of time in a bunker under the ground with no daylight or any notion of time, weather or whatever is going on… But at least it made us focus on recording!

Can you tell us about the title and its meaning?

I think the stunning artwork tells the story we wanted to tell: create to destroy and destroy to create…

Can you tell us about the artwork for the album and how it relates to the music?

It is the perfect depiction of our music and what we had in mind when creating this album… it has so much strong visible but also hidden philosophical elements in it, it is the perfect cover!

Who is the artist? And why choose to work with them?

The artwork was painted by Thorny Thoughts Artwork. She is a tattooist, makes etchings and has been doing art all her life. We have chosen her because we knew she could make a stunning colourful painting, that would not be to “happy”… she created the artwork for our Apparitions mini album as well, so we knew she would be good with colour. She also created one of our first shirts back in the day when we started and she has been providing us with killer artwork for over 10 years now!

We told her what this album was about, what feeling the art should have and obviously we gave her the music. Other than that, she had total freedom and could do as she pleased and do what she felt like. She came up with this… you should see the real deal, even more impressive when you see the painting hanging on the wall… it is 1 by 1 meter you know!

About the band, Urfaust formed in 2003. How does the band of 2016 compare to the band of the early days? How has the band developed since then?

We have grown older, maybe a bit wiser even… but we are basically the same guys: we create the music we want to create and take no compromises: we do as we please and do not care what other people think about this… We have been keeping developing our own sound, because we want to keep it interesting for ourselves… who wants to make the same album twice? Not us!

What does the act of making music mean to Urfaust?

What, if anything, are you searching for when making music for Urfaust?

A musical reflection of our state of mind I guess!

Music is a very powerful medium for conveying messages, secular and spiritual. Do you think that music is itself imbued with a power to provide an avenue into these unknown aspects of existence?

Yes for sure, I am highly convinced it does… Music can take me to other places of existence… not only when listening or experiencing it, but especially when performing!

Musical and otherwise, who or what influence or have influenced Urfaust?

Hard to tell to be honest, since there is too much to mention… books, films, music, arts, everyday life… traveling, hanging with friends… I guess both of our lives and states of mind reflects a lot in our music…

Is there a philosophy or an ideology behind Urfaust’s works?  If so, can you tell us about it, how it originated, what influenced it and how it has evolved?

Interests come and go as we become older. Friends come and go, life comes and goes and so it our philosophy… one should never be stop exploring, so this is what we are still doing!

Any plans for shows in support of Empty Space Meditations? And will we see you in the UK?

Yeah, of course we keep praising the Intoxication and perform our Ritual on stage…. but to be honest: not sure if we come back to the UK… I do not want to start a rant here, but the UK underground should real get their act together: The recent Caledonian Darkness II was a great festival, which had one of the best sounds that I have ever experienced… but where the fuck was the crowd? We heard from various people that “it was too far”… How can a gig on 30-minutes driving distance be too far from people from Scotland and the UK when there where people from all over Europe? The line-up of this festival was fantastic featuring the crème de la crème of the international Black Metal scene and people from the UK could not be bothered? So why should we even bother to come back?

Do not get me wrong, a festival like the Black Wood Gathering which we played was also a fantastic festival organized by true supporters of the underground, who manage to pull off a killer small festival in a beautiful location… and we love to support a festival like that and I hope we can return to that…

But seriously UK, what is wrong with you people?!

I hear from a lot of bands we regularly perform with or other befriended bands that they do not have any interest to play in the UK anymore, because the crowd is so apathetic and unless a show is 5 minutes walking distance, it is too much of a hassle for them to go…

But on the other hand, these are the same kind of people who are complaining that no great underground Black metal festivals or concerts are being held…

No wonder no one is organizing anything if no one turns up… instead of complaining, people should get organized and actually do something instead of sitting behind their keyboards and writing complaints online how bad things suck!

Also the whole Temples Festival debacle left a very nasty aftertaste in our mouths… cancelling the whole festival 2 days before it was supposed to happen… not even having the balls to contact the bands about it, but friends called us to say it was off because they read it on social media… what a joke!

Sorry, I didn’t want to go ranting, but I guess I did a bit…

I want to make it clear that we get a lot of support from the UK scene and we want to thank everyone who supported us so far and joined us during the Blackwood Gathering and this Caledonian Darkness festival: it is good to see there are still dedicated people around… and for those we happily come back! We just hope there will be people attending and supporting these kind of undergrounds events!

What would be the ideal setting for a performance of Empty Space Meditations?

Some drums to attack and some amps to destroy…

Early days I know as the album has just been released, but what does the future hold for the band?

We will be releasing some new stuff at the Acherontic Arts III Festival in Oberhausen, Germany in May 2017! It is the festival of our record company Ván Records, and this festival is one of the greatest there is: all the bands playing are signed to Ván Records and it feels more like a family gathering than a regular festival! So we will release something special there… 1 of the releases will be a split 12” with our brothers of Wederganger! The other one… well… is a secret! You have to attend the festival to get it… And other news is that we have started recording again and we have finished an epic death doom song clocking 13 minutes… so that is something… Maybe the next full length will not be a 6 year period wait!

Thank you for your support and taking the time for our interview! We want to thank all English Clochards and Devotees for their support…. if you want us to return: Get your ass together! 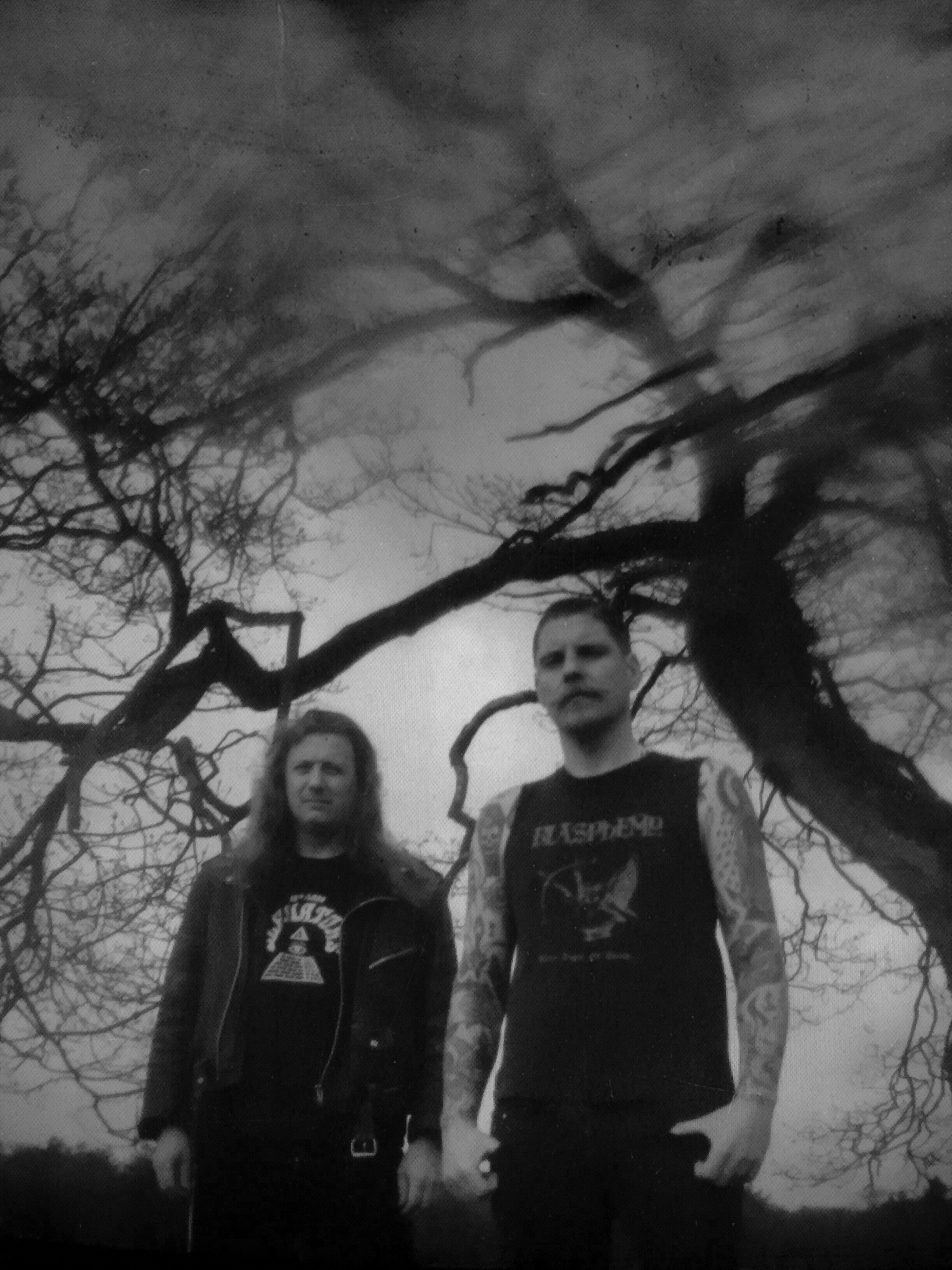