Seven years after their third album, Italian speed metal merchants and Motörhead maniacs Baphomet’s Blood are back with album number four, In Satan We Trust. Here, vocalist / guitarist VP Necrovomiterror tells MR’s Jason Guest on what the band have been up to during that time, the new album, the band’s history and their devotion to metal and Motörhead!

Thank you very much for taking time out for this interview and congratulations on In Satan We Trust (reviewed here.) It’s been seven years since your last full length album. Why so long between records?

Hi Jason, VP Necrovomiterror here from the Baphomet’s Blood headquarter! We had some line up problems for the past 5 years. After the RR Bastard departure, we spent a lot of time to find another drummer, and once we found him, he had a motorcycle accident with some serious leg problem. We had to spend another 3\4 year to find our actually drummer SR Bestial Hammer. Now we are back and we are ready to kick your ass!

We want to kick your ass for 40 minutes with some Speed fucking Metal in the best tradition, in the real old way! After a lots of shows and many release we have refined our style to this. I think from METAL DAMNATION we are taking a litte bit of heavy metal in our songs. If you like, call it a “progression”.

We are lucky to have the BEST sound engineer of the whole zone: Manuele Marani from the studio MARA’S CAVE! He recorded us since the beginning, and he knows perfectly what we have in mind! He’s definitely the fifth member of the band!

There’s a cover of ‘Eleg’ by Farao on the album. An obscure one-off single from 1986, why did you choose this band and this track for a cover version?

We like a lot to put a cover song on every record we make. It’s like a tribute for all the bands who created this kind of music and lifestyle. We live for metal and we will die for metal! We have chosen that band and song because is fuckin’ amazing! I really like the riffing and the concept. The problem was the language and with a friend from Hungary we translated it and we decided to record the track in English for the first time! I’m also a metal vinyl collector and finally I’ve found the original 7”! Rock and Roll! 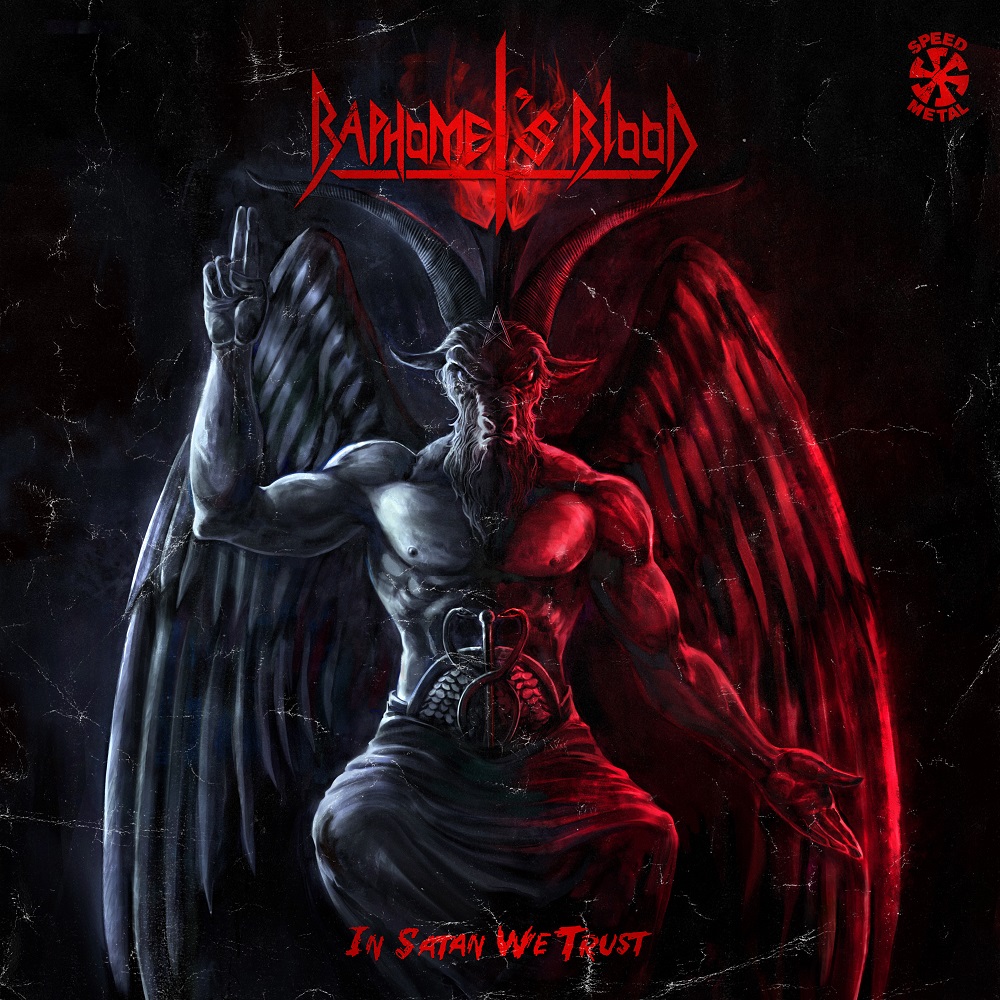 The artwork for the album is very different from your previous album covers. Who’s the artist? Why did you choose to work with him/her? And how much direction did you give him in its design?

The artist is Ivan Tao. He’s a graphic designer, he also worked for my other band Hatred for the last LP for Doomentia Records. A.Trosomaranus, our guitar player, is in touch with him. We wanted something that would fit like a real paint and he realized it in the perfect way!

You’re working with Iron Bonehead again for the album release. Clearly you’re happy working with them. How did you come to work with the label? And do you plan to stay with them for future releases?

A lot of labels write me every month to propose some release, but my band will only work with Iron Bonehead for life. Patrick is a blood brother for me. We work together since the beginning and I’m very proud of it. Also he hates CD’s like me, ahahah!

The band has been in existence since 2003. Can you give us some background on the band, how you formed, and its musical development since its inception?

Me and R.R. Bastard we were trying to do some noise in a garage-rehearsal room near our zone. We tried to play thrash speed metal more raw and fast as possible, and one day, we thought to record this stuff and we have released the first promo to give to some label! After a couple of years, while I was at the Keep It True Festival in Germany I met Ader from the Brazilian label DIES IRAE and we signed for the first LP Satanic Metal Attack.

Later Blood Vomit Records wanted to do a tape with the complete promo session recording. During this time we played a lot of shows in Italy and finally we met Patrick from Iron Bonehead records. We become real friends; he organized for us some shows in Germany and a couple of tours. He’s like a brother for us and we would sign for him for Life! He needed a support from HIGH ROLLER rec to release Second Strike and Metal Damnation.  And after a lots of live shows, beers, Jim Beam and rock and roll we are back again with this new LP!

Your music is rooted in 80s speed metal. Who are the band’s main influences? And how have they impacted on the band’s sound?

Everyone knows our biggest influence! We are crazy maniac for Motörhead! We are also into old\real metal from the glory days. Bands like Running Wild , Tyrant(Ger) , Venom , Exciter , Razor , Killer(Bel) , Death Ss , Strana Officina , Fingernails , Sad Iron etc. are very important for us. I also love rock and roll and blues from the past: Muddy Waters, Little Richard, Canned Heat, Howlin’ Wolf etc. for example. I also worship The Rolling Stones and  ZZ TOP. Love those bands! And I am completely obsessed for Rose Tattoo! Everything you like tries to kill you!

Motörhead are an obvious influence on the band. With Lemmy’s passing, is it the end of an era for heavy metal?

For sure is a bad shot for us. We was at the show in Munich on 20 and 21 November and one month later he dies! I’ve seen 21 Motörhead shows in my life and now I can’t see them on stage anymore. For sure we have lost a real icon of Rock and Roll. If we are who we are, it’s for Lemmy! Motörheadbangers for life! Stay clean!

The band members are all in or have been in other bands. What does Baphomet’s Blood allow that those other bands don’t?

Yes, we all played in other bands, some of those bands are still active and I think that beyond Baphomet’s Blood, being in other bands and projects gives us the opportunity to play different genres of metal, for example with  Blasphemophagher I could play Black war metal or Hatred which is more thrash. Each band is important in a different way and allow us to have some fun and satisfaction.

Me, Necrovomiterror , I create all the songs and lyrics then we all together go to rehersal room and try to arrange in the perfect way. We usually work in this way for every LP.

Drummer S.R. Bestial Hammer joined the band recently. What has he brought to the band and its music?

Speed and Fucking POWER! He blasts like a hammer and destroys a snare every show! He fits perfectly for us!

Are there any plans for live shows? Will you be visiting the UK?

We have a lot of shows planned for the 2016. Italy and some Europe shows are already booked. We have never played in UK and nothing is planned for the future, I hope to play in UK soon! In July finally we’ll hit the USA for the first time! We’ll do 15 shows all around USA with Violentor from Italy. For sure will be a fuckin’ whiskey time!!Stone deaf in the USA!!!

What would be the ideal setting for a performance by Baphomet’s Blood?

We played in many different places, festivals, pubs, small clubs, every time is different, obviously when all is well organised and it works perfectly is excellent, I think most of all  when there are the right people under the stage everything goes better!

What does the future hold for Baphomet’s Blood? Is there more material in the works? And will we have to wait another seven years for the next release?

Ahahahah, no more seven year wait! Now we have a stable line up and after the American tour we’ll start to work on some new stuff! 666!

Thanks for the interview! We would to thank every reader and fan all around the word! Keep on Metal and don’t forget to rock and roll! We all praise the DEVIL! Aaaaaaarrrrrrrgggghhhhhhh!!! 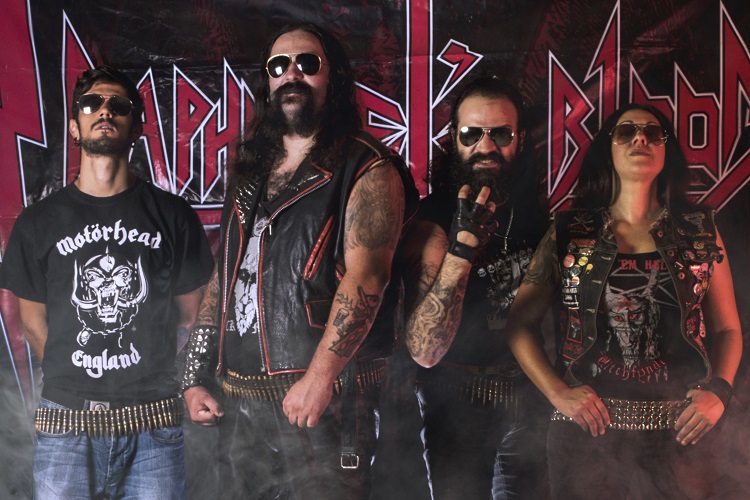