“If you start to look to other people for answers, you’ll never get a right answer.”

Midlands Rocks caught the Less Than Jake / Reel Big Fish / Zebrahead show mid-way through the UK leg of their tour at the Birmingham Academy. As doors to the venue opened, LTJ drummer Vinnie Fiorello entertained the MR team in the band’s dressing room to talk record labels, drugs laws and Orlando Bloom…

Ian Savage: So, you’re in Britain, you’re being treated to the best of our weather and beer – how’s it going?

I: The album’s been out for a couple of months, how’s it being received?

V: It’s been great, you know, fans seem to really like it and gravitate towards it, we’re super-proud of it – it’s a record where Roger, our bass player, did everything: produced, engineered, recorded it at the Moat House Studios, and it felt really good to be very insulated from the outside world as we were being creative. We were kind of doing what we wanted to do exactly how we wanted to do it.

I: I’ve spoken to a few people who’ve seen you earlier on the tour, there seems to be a kind of travelling circus vibe about it…

I: Over the last few years it seems that Less Than Jake fare better in spite of major label support rather than because of it; how’s the digital age treating the band?

V: So far so good! With Less Than Jake we’ve always prided ourselves on being slightly ahead of the curve when it comes to technology; we kind of saw it coming and that helped us along with the transition from a physical product – you know, a CD – to digital, and we’ve always been a band that prided ourselves on unique merch items, unique packaging, and limited editions, whether it be vinyl, prints, deluxe packaging…so you know, because we had those kind of things already in place it was much less of a scramble when the ass fell out of CD sales.

I: Do you think there’s a fundamental disconnect between punk music and the major label model?

V: There’s a fundamental disconnect between the consumer of music and major labels. They [major labels] had a chance to be ahead of the curve and be in touch with how people actually digest music; they blew that chance and now they’re scrambling to make up on it. The kind of shit deals they’ve made, with Spotify…I mean, Spotify is great, and Rhapsody, and all those, are great for the listener, for the consumer they’re fantastic, for the musician it’s terrible.

I: I read some figure along the lines of having to get four million streams a year [by some sources it’s ten times that] to earn minimum wage for a solo artist…

V: Absolutely! I think that major labels are scrabbling NOW for the length of time it took them to realise where the arc was going – they got greedy! And the consumer said “why would we pay eighteen dollars for a CD?”; it doesn’t take eighteen dollars to manufacture a CD, so with that greed the consumers got smart, they got wise, and they started stealing, pirating…but now, people are happy to pay their ten dollars or whatever for Spotify, all-you-can-eat, so to speak, and people are happy to have that for their ten dollars.

I: The new album to me seems to come a little bit away from the horns and the ska side, to be a little bit more punk-edged…am I hearing it how you wanted it to be heard?

V: Music’s in the eye of the beholder, or in the ear of the beholder – some people say it’s more of a welcome return to ska-punk, with MORE horns on it! I mean, with every Less Than Jake record we just write songs and bring it in; I think that compared to the last few records it’s more horn-heavy, more ska-influenced than just straight punk, and with ‘See The Light’ I think it’s more of a complete picture, a complete idea of songs, lyrics – and hence the full-length [record]. I personally had no interest in doing a full-length, I was happy doing EPs; we had a bunch of EPs with, like, five songs, and I was having a fun time doing it!

We were concentrating more on the songs rather than a full picture, because when you have thirteen songs on a record, each one has to have a nuance that leads into the next song, and it has to have a pretty good arc of creativity to do a full-length and pass it off – not just a record full of singles smashed together.

I: Of course, you guys did the TV-EP thing which was sixteen songs in about eleven minutes…

V: Something like that, yeah! *laughs* That was something that was fun, and we wanted to do it – it was more of an exercise in…you know, do we have the discipline to pull all of this together without any outside help? So that was very much a band-recorded, band-manufactured, band-distributed kind of thing…

I: And you had experience of that yourself because of running Fuelled By Raman [label]…

V: I did have that, yes, I’ve now left; I’m now doing a kind of a multi-media company, called Paper and Plastic – I do vinyl records, but I also do a lot of toys and books, graphic novels, things like that; the focus isn’t [just] on music, the focus is on creative output.

I: On the politics side of things – because of the party feel of a ska-punk show do you ever feel like you get taken less seriously than more straight-ahead punk bands like, say, Rancid or Bad Religion?

V: Yeah, I think so – I mean, Less Than Jake definitely have the fun vibe live, but on record there’s always a serious topic, social or political, and I do think people look over that because it’s such a rambunctious and energetic live show. Maybe people gloss over the message…but you know, the message is the message, and some people tune in, and it hits home, and other people are happy singing the ‘whoa-whoa-whoa’s and the ‘la-la-la’s! And that’s cool by me too, it’s supposed to be entertainment, it’s supposed to be fun, but you do have that creative side too, that way of getting into the nuts and bolts of how our brains work.

I: I’ve noticed that Streetlight Manifesto (fellow East-coast ska-punkers) have recently called it a day, probably due to record company pressure – how close did Less Than Jake come to that, if at all?

V: I think that with Less Than Jake, we’ve been through so many record labels; indie, major, doing it ourselves; the whole point of it was that we always had this internal guiding point. So no matter what the external forces were: when they would leave, we still had that internal thing where we could go about our own business. So as long as you can keep that head-space that it’s just YOU at the end of the day; you start relying on a manager, relying on a record label, relying on anyone outside of the band and the fact that you have fans – if you start to look to other people for answers, you’ll never get a right answer.

I: A few to finish on – over here in the UK we find the US marijuana legalisation thing fascinating, what’s your experience of it?

V: You wanna know what’s crazy – when we first started coming over to the UK it was really loose, man, we’d go into bars, like, after-show bars, and you’d see some sixteen-year-old kid having a snakebite with a cigarette hanging out of his mouth and we’d be like, “Holy shit!”. *laughs* “there’s no way that he’d get away with that in the United States!” – but it seems now that the US is getting much more loose and much more liberal at the same time as the UK is getting much more conservative, more rule-heavy.

And it’s fucking crazy, man, because I never thought that would be the case, where the United States is like “yeah, y’know, whatever…we’re gonna legalise marijuana, bust out a lot of state control to what was federal-controlled, and let it happen” – I mean, fuck, I never thought that that would happen, that federal control would kind of dissipate and let the states take over! But at that same time, Amsterdam, Holland in particular, is getting kind of religious conservative as they took over power, they’re trying to clean up their image and pass a lot of drug laws and things like that, so it’s a wild time, man; seems like over here things are getting more conservative at the same time as over in the States things are kind of opening up; the lunatics run fucking wild!

I: The new Less Than Jake video (‘My Money Is On The Long Shot’) features a lot of friends of the band, a lot of musicians – if you were to put together a dream band from the people in that video who would be in it?

V: *silence, glances around the room at his bandmates*

Roger Maganelli (bass): I’d still be in it! *laughs*

V: I would take Fat Mike…

V: No no, I would just take Fat Mike to play jokes, and I would have CM Punk singing, and we’d be doing Black Flag covers, like a bunch of other bands do these days *laughs* Stephen Egerton playing guitar for sure, and…yeah, there you have it!

I: Last question: we’re making ‘Less Than Jake – The Movie’ – who would you want to play you?

B: I would love to see Chris DeMakes played by Danny DiVito *laughs*

V: I would love to see that!

R: Well, it’s obvious who would play me, right? 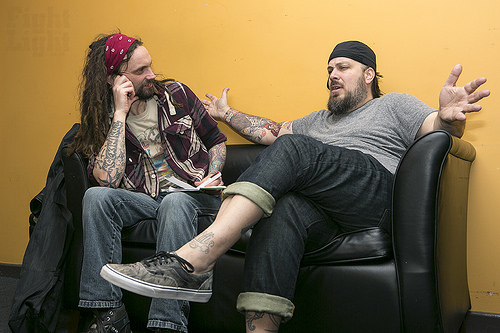