“Man has a bleak future only because he has damned himself.”

Thank you very much for taking time out for this interview and congratulations on the re­release of Sovereign Nocturnal (reviewed here).

Greetings and thank you for taking interest in our work.

Why did you choose to re­release the album?

Sovereign Nocturnal has seen several incarnations over the past few years. Since we have chosen not to work with larger labels in the past none of these incarnations were terribly elaborate or released in large quantities. As is the nature of smaller numbers the previous editions were quickly distributed to their ends. Although the numbers have been exhausted, I believe fully in the music from Sovereign Nocturnal and would like to further spread the flame of this vision. For this reason when Eisenwald approached us about re-releasing Sovereign Nocturnal we were very much onboard with the notion. This partnership allowed for us to create the ‘final’ edition of the album complete with design and vision I had imagined with the first inception of the album. I feel that in this rendition Sovereign Nocturnal can continue to be spread in the most proper fashion.

Why did you choose to work with Eisenwald for the re­-release?

Eisenwald is a curator without compromise; he ensures that the art he purveys is released with true integrity. Unlike so many labels that spit out records like bargain-bin products slammed with barcodes and cheesy marketing, Eisenwald spares no expense to ensure the highest quality with his releases. Aside from his charming persona, I very much respect Eisenwald’s approach to his work and for this reason am very happy to work with him. Our partnership ensures that after all our efforts as a band that the final stages and presentation within the halls of infinity will be granted as much attention to detail as we had put forth in our own craft.

The album speaks of a reflection and calling for the past. Is this past a nostalgic past or something actual? If the latter, is it retrievable?

Perhaps there is some reflection upon the past in ‘Risen of the Moor’, but that truly is the extent of it. This brief reflection is a part of the entirety of the journey that is Sovereign Nocturnal. In the simplest interpretation from start to finish the album is a story of growth, realization of and resigning to something greater. In prose and metaphor this retro-reflection is a part of the journey that moves us forward towards realization. The deconstruction and unfolding of the patterns and legacies that precede our current state shape the present and eventually yield the construct of the future. That which has transpired before our current state of self must serve as a lesson to drive us forward lest we forget the past and wander in circles. Through this forward progression is the only way to actualize the essence of what has come to be. Notions of the past always will bear with them nostalgia for their certainty and definite nature bring with them comfort. Of course there is no way back to these points along our own histories nor to the times that precede our own, however, we can always look back for a point of reference. In the journey that is life one can only move forward alongside every element bound by the current of time.

The album’s impression of the future is very bleak, a time of societal atomisation when humanity is consumed by selfish desires. Is this bleak future inevitable?

On one level, I suppose that is a possible impression. There are sentiments of hopelessness and resignation that dwell within the words. However, they are more a part of the aforementioned journey. I feel there is a choice laid out for humanity. We possess great power within and are capable of truly magnificent things. Man has a bleak future only because he has damned himself. He has built for himself a large and sinking ship upon which he wants everyone on board. If the sails are filled by the winds of his selfish material pursuits, he is doomed. This path leads nowhere; mankind will race efficiently toward his end ultimately destroying himself. If we hold onto the weak and greedy, then we fall with them. If we wish to survive, our focus needs to shift to the larger scale on which everything surrounding us operates.

How does the natural world influence the band’s music, its writing, structures, arrangements, etc.?

The place in which we reside is on the very edge of the Rocky Mountains, we are constantly overshadowed by the vast majesty of spires of earth thrust upward by the movement of Earth’s inner churning. These churnings of our Earth on which we dwell orbit a sphere of nuclear fusion racing through a vast system of infinity. With our eyes turned outward in complete awe, I don’t think we can help but be influenced by the natural world around us. Its magnitude and movement are truly a beautiful and humbling thing to behold. In the same way that mankind struggles to explore these things through science I feel we struggle to explore our own sentiments of these greater things through our art. It is not necessarily a conscious homage to the natural world surrounding, but a reflection of the microcosm against the vastness of the macrocosm of which it is a part. We are all borne of it all and dwell within it; this is where our music comes from.

Under Christian ideology, the name “Velnias” has come to be associated with Satan yet you take meaning from the Baltic mythos where the name signifies a deity reigning over the natural world. What’s the significance of this deity for the band, its music, and its philosophy?

We simply harbour the truth encoded within the figure of Velnias. The Christian twisting of the being is merely the demonization and re-interpretation by another cult. Velnias, the wolf, is indeed the figurehead of the natural world and the force that works against mankind’s efforts. Being a figure of opposition he carries with him great resistance and naturally, being the weak herd animal that man is, most people bend and fall before this resistance. However, as the weak fall we see that Velnias is not the destroyer of man, but a figure that acts as a grindstone against which mankind can strengthen himself. By his hand Velnias culls the herd and at the same time serves as a teacher. The challenges he presents encourage us to enrich and strengthen ourselves physically, mentally and spiritually to become something better than the base animal mankind is by nature. Even in the Christian context, the figure of Velnias may be directly compared to Lucifer, the lightbringer, who bore upon man awareness of himself that furthered his development and carried him to stand confident in his own being.

For this reason we have chosen to work under the name of this figure. We welcome and push for that which will shatter perception and bring the fall of this material kingdom. At the same time we kindle the flame that burns within our hearts and minds that drives us to pursue the greater things of this existence. The friction of this duality is very much something we explore in our words, imagery and tonality.

Musically speaking, how has the band developed since Sovereign Nocturnal’s first release in 2008?

After many years of dealing with changes of our line-up we have finally gathered a group that has a very strong synergy. Through our pursuits of touring and writing together as a group we have honed our focus and move forward with what I feel is clearer vision than we have in the past.

Your second album, Rune Eater, was released in September 2012. Is there more material in the works? A new album?

Indeed there is new material in the works. We are constantly working towards the next step for Velnias. Generally we work very slowly, sifting through all of our ideas for what we feel are the best that we can conjure. The new ideas we have been gathering currently should be bound together into an album within the next year or so.

What kind of progression does it mark for the band? And any idea when it will be seeing a release?

The next album simply marks the next step in our exploration of this creative journey. We move forward with less concern for where the music falls and more focus on the essence of that which drives us forward. There are never any preconceived notions going into these things, we simply work with what we conjure from the creative ether. I hope to have all of our ideas together enough to see a release come to life before the end of 2015.

I believe this is true for most art. Our ability to create and manifest from the depths of our imaginations is the essence of that which makes us human. Each of us is a unique conduit to some manner of interpretation of the world surrounding. The infinite reflections of any given person against the infinite stimulus that engulf us yield infinite permutations of ideas and inspiration filling the well of our mind. If a person is able to watch these reflections and truly pay attention they may possess the ability re-encode them in the form of creative mediums. For as long as man has existed he has sought to share this existence through these mediums and despite thousands of years of progress still violently continues to do so to this day. Though much of art has become simple reiteration of aesthetic trends to please the beholder, in its truest form it may offer us a glimpse into that which is burning deep within the essence of another world. The very core of true inspiration and passion is quite a mysterious realm, very abstract by nature. By drawing upon these elements to create something I believe it is possible to open doors into some manner of esoteric realm.

You’ve recently completed a European tour with Kampfar, Hate, and Iskald. How did it go? We have become quite fond of touring Europe. Over the years we have toured the States quite thoroughly so these new ventures have proven to be a welcome extension of our journeys. This tour in particular was grand, we were fortunate to be in quite good company. As always good times were had, shows were played and much was learned.

Thank you, again, for taking an interest in our work and that which lies behind it. Life is brief in its passing, never falter before the will of the world surrounding. 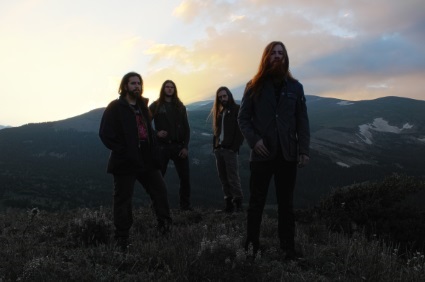