Hailing from Wakefield, West Yorkshire, Vardis have been putting the ‘power’ into power trio for almost 50 years. Having recently released the critically acclaimed live album 100MPH @ 100 Club (reviewed here) it seemed the time was right to catch up with founding member, vocalist and guitarist Steve Zodiac.

Formed in 1973, Vardis predated the whole NWOBHM movement so how did you become entrenched in that scene? Do you feel you get due credit as pioneers?

We were still at school when we first formed in ‘73, and the next five years or so was like apprenticeship where we went from rock ’n’ roll covers band to finding an original sound and reaching a pro level. It is nice to be acknowledged as part of the NWOBHM but it never felt like we were entrenched in the scene to be honest. Initially we were part of a movement pushing rock heavier and faster with a punk DIY attitude, but beyond that we never really fit neatly into NWOBHM as a genre, which worked for and against us in different ways. 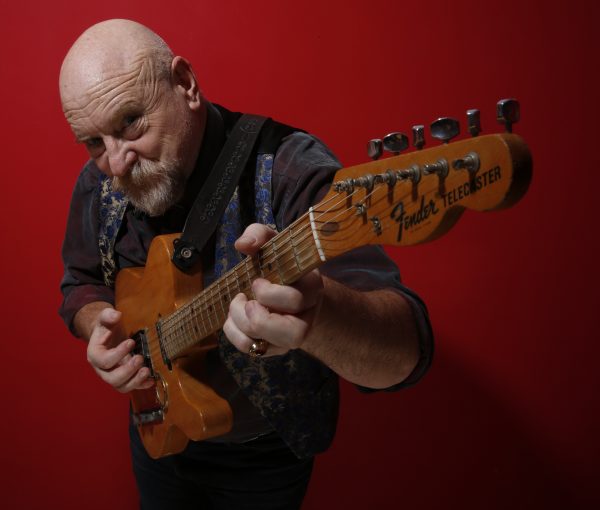 It was a risky move releasing a collection of live recordings as your debut album. What was your reasoning? 100MPH is such a well-regarded album so it must be nice that the risk paid off?

There was no master plan. We had been playing the Northern working men’s’ club circuit for years and built a proper live following, and never really liked results from studio demos up to that point. It felt like a natural progression once we got our record deal to capture what we did live, as our live reputation got us that opportunity. We were still very young and had little studio experience, so at the time it didn’t seem like gamble. Looking back now it seems like a ballsy move, and of course I’m grateful it paid off.

After your debut album things moved pretty quickly and featured a slot on the 1981 Heavy Metal Holocaust festival. Can you give me a flavour of that time? 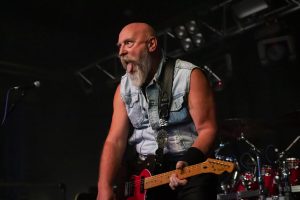 I already knew Phil and Eddy as we had been flat mates in London for a while. Lemmy used to come to see Vardis when we played London and came to the 100mph recording so I knew him quite well. We’d already played a few shows with Motörhead, and I had met Ozzy a few times at Shepperton Studios where we rehearsed on different stages. That was where we were asked to open the proceedings at the Heavy Metal Holocaust. All I remember is that it was a very hot day, and I couldn’t hear a damn thing onstage despite the biggest sound system in the world at that time! The set went by in a flash and all I remember was the crowd shouting for more. With the bands up the bill, I knew that meant we’d done the business!

I had a big argument with my manager who was ripping us off. I should have listened to Harvey Bainbridge from Hawkwind who warned me not to sign with him. I am not the type of person to suffer fools and so took the manager to court. I won the case and the rights to my songs, but the legal battle dragged on for years and the price I paid was total disillusionment.

How did you spend the intervening period until reforming the band in 2014? And what was your reasoning for putting the band back together?

I was so fed up with the music business I decided to walk away forever. At first, I retrained as a sound engineer and worked in theatre, then got into writing Music Tech and Sound Engineering courses for City & Guilds and BTEC before moving into education full time giving lectures and organising apprenticeships. Over those 20 years I was approached a couple of times to reform the band and always dismissed it out of hand. The difference in 2014 was my wife Irene pushing me to do it for the first time. She said I was lucky because had I been a footballer, I would not have any chance to perform again, and that my guitar playing was as good as ever, she was right and that swung it for me.

SPV did a great job with your latest release 100MPH @ 100 Club. It contains all the tracks from the original 100MPH and a load more. How did you decide what to include (and what to leave off)?

We were paying tribute to the first album 40 years since its release. So, we had to play every track 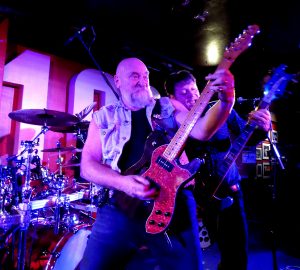 off 100mph album as a starting point. We made it a double album to touch on all the other records but hadn’t decided which tracks until we jammed a few through in rehearsal. In the end it hinged on how my voice could cope and which lyrics I could remember in time for the show! The title track, ‘100mph’, is one of the most demanding to play that I’ve ever written. I hadn’t played it in 35 years, so it was a challenge not just to relearn it but rework it, so it wasn’t a carbon copy. In the end we paid tribute to the 100 Club by working in snippets from some great acts who played there as it was a 70th anniversary for them too.

It sounds like it was a lively night. Did it live up to your expectations?

More than lived up to expectations, especially as the world was on the brink of Covid lockdown. It was a charged atmosphere leading up to it, we had loads of emails and enquiries asking if the show was still going ahead so it was fantastic to see such a big crowd brave the new world that night. We had never played a two-hour set nonstop before and believe me the day after I felt I had done twelve rounds with Mike Tyson! I have to say the crowd were fantastic and I think everyone in the room came together to escape the escalating tension outside and rock out.

In retrospect the timing was lucky with regards to the lockdown. As a musician how hard has the last two years been? Being unable to tour must be difficult so how have you promoted the new album?

True, it turns out Friday the 13th is lucky for some! Especially as having the album in the can meant we could throw ourselves into mixing and mastering the record with total focus and making it the best it could be. Of course, it’s a bit gutting not to be able to tour the album on release, but it’s hardly the biggest tragedy to come out of Covid19 so I can’t complain. I’ve done all the press and radio remotely down here in Greece, and of course social media has helped us get the word out and stay connected.

Finally, what are your future plans for Vardis?

In the short term we really itching to get out there and play. Joe Clancy [drums] and Roly Bailey [bass] are two of the best musicians I have ever worked with and as you can hear on 100MPH @ 100 Club this line-up kicks out blistering rock ’n’ roll with real chemistry. We are coming to the UK for a few shows this spring and barring full lockdowns or one of us actually getting Covid we will definitely be doing those dates (see our website and social media for details). We live in volatile political times and things are tough for venues, promoters, and bands with the coronavirus threat, so all we can do is hope everyone plays it safe by getting vaccinated. Right now, there is no better way to support live music. In the medium term we have a new project in the pipeline for which we will be back in the studio, but I can’t say too much about that at the moment. 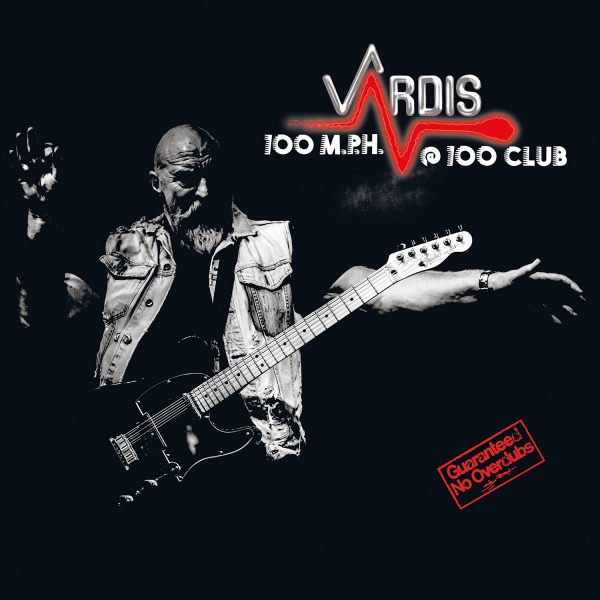