Hi Tony, I hope you’re well. For those who don’t know you, can you tell us a bit about yourself and the band?

Hi; awesome to have this interview for Midlands Rocks. I was brought up in a musical family, basically. My father constantly played his vinyl discs, of evergreens and folk songs, at home. I learnt to sing along to solo artists from the 60s and 70s. Later on during the 80s I also started to listen to rock bands from this era. I started my career as a vocalist in 1987, in a band called Zanity and after that followed bands like Swedish Erotica and Lion’s Share among others.

In the year of 1994, I started off NIVA from the ashes of a band called Axia. That year we released “No Capitulation”, through Zero Records in Japan. It felt like it was really the start of something new that we felt was very much unique in terms of how the songs were written and how we managed to develop our compositions. After releasing our debut album, we went to the studio to record the follow up, but it felt like a whole history of contradictions for the band led to the ending (of it). The creation of the follow-up album in 1995 happened, but it was never to be released.

In 2001 I had a brief time in the melodic metal act Lion’s Share and we released “Entrance” that same year. It wasn’t until Roger Ljunggren called me up in the summer of 2011 and wondered if I would consider recording the vocals for a song for the Swedish Eurovision song contest that you really begin to talk about a re-birth and new dawning for NIVA. That year “Gold From The Future” was released in Japan, through Marquee Avalon, and it’s gone on from there.

What can people expect from your album ‘Magnitude’?

We truly hope that people can feel that the songs contain meaningful lyrics and emotional compositions. We’ve always tried to include joyful tunes in our songs and arrangements, since that is what we would like to play in case of live performances. We would also like the listener to recognize our compositions, where the heavier parts are facing the AOR/Melodic parts, to give the feel of dynamics and contrast.

I’m really enjoying the album; I love the immediacy of the choruses and the commercial edge of many of the tracks! Was it always your plan to craft a very commercial album and has ‘Magnitude’ turned out as you originally envisioned?

Our plan has all along been about creating songs that we would enjoy listening to. I like to think that we’re artists that are creating our unique compositions, and that this is a result of three artists working closely together during the whole process. The album turned out to be much better than we first envisioned. I figure that this is a result of us being involved in the process from demo to final production.

What is the song writing process like for Niva?

All the song-ideas are really developed individually, in each and every one of us three composers; that’s Roger Ljunggren, Marcus Persson and I. Afterwards, we meet together to make the arrangements and record everything, which then is adjusted before we’re going in to the studio for the final recordings.

Can you tell us a bit about a few of the songs on the album now, how they were written and any stories and meanings behind them?

Sure… For example “Never Too Late” is about the notion that it’s never too late to have a brand new start even though you might think it’s all over. The song is all about encouraging yourself to make wonderful things with what you have inside yourself.

“Perfect Life” is a song about us (people) struggling for more and more materialistic things even though we have enough. It’s not always greener on the other side.

The idea to “In A Misty Light” came up when my friend and neighbour passed away. I wanted to dedicate this song to his widow, who now lives alone. This song is about her meeting him again somewhere in a misty light. This is my way of processing everything that has happened and also giving my respect to both of them. 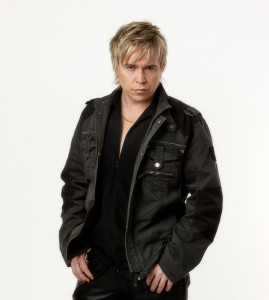 Will you be making a promo video to accompany the album?

The plan was to make a music video out of the first song “Never Too Late”, the first song that was written for “Magnitude”. As a solo artist it’s sometimes hard enough to just release the album, financially speaking, so we’ll have to wait and see when the opportunity arises to do that? And then, we’ll be going for it.

Do you plan to do any live shows here in the UK?

We would of course like to play in front of a live audience and when looking back, on my visits to the UK, I would be more than happy to be able to meet UK fans who really like this type of music.

Who would you love get on the road and tour with?

There are many great acts in the AOR/Melodic Rock genre that would be a great experience for us to support, but it is also a fact that it is more important to have the opportunity of going on tour then to make plans about what act to support, as long it’s within the genre. This is a discussion we have to take when that time comes. Another aspect is also how well the album will be received before going off to plan a tour.

How did your deal with AOR Heaven come about and what’s you experience been like working with the label?

I basically contacted the label and asked them about a business proposal. It was a great proposal too, so we accepted with a signed contract. I noticed immediately that AOR Heaven is a well-known label with a great staff, working hard to promote their releases. Now I have to work almost day and night to reply to interviews and questionnaires, etc., which is great.

Is there anything else you would like to add or say to our readership?

I hope that we can soon unite us, NIVA, with our fans in the Midlands through a live show. We wish you all the best. Many greetings from the NIVA camp.