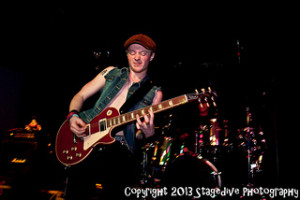 Welcome to Midlands Rocks, thanks for talking to us, tell me a little about how you got into music.

It’s hard to pinpoint one particular experience or moment that stands out… for me personally [Kyle] I owe thanks to my dad. As soon as I was old enough to be allowed in the venues I was dragged along to see bands like Thunder, Dr Feelgood, AC/DC and everything in between. I don’t think anything compares to discovering music when it’s live, there’s such a feeling of magic about it when you’re younger too… I think I’m still hooked on the simple things where music is concerned.

So who influences you now?

We’re heavily influenced by what’s going on in the American rock scene at the moment. Bands like Black Stone Cherry, Shinedown and Buckcherry are big influences on both the songwriting and the way we try to play live… raw, dirty and turned up to 11.

If you had a chance to work with a famous artist who would that be?

Thunder. Those boys have such a stunning catalogue of songs that we all grew up on. The Luke and Danny partnership is a golden combination and it always looks like every show is the best night of their life!

Congratulations on your second EP, where and when did you record it?

Thanks! We recorded THEIA II with Nick Tyler of Dove Road Productions back at the beginning of this year and released it at the end of April.

Clearly a lot time and effort has gone into the EP. How long did it take you to write the tracks, and did you think about a consistency to create ‘your’ sound?

The tracks came together bit by bit, as we worked on one song, we seemed to get ideas for how to make the EP a package deal – we wanted to put out three tracks that stood up on their own but could be played together and really packed a punch! I [Kyle] tend to sit with the rough ideas in my head for months until they just come out when we’re rehearsing together. Paul and Tj either say ‘I love it’ or ‘What on earth were you thinking’ and then we just keep playing them and editing them as we go along.

‘We’re Alive’ is a great anthemic track, I love the haunting intro and build, what’s the story behind it?

It’s great to hear that! We’re Alive is a labour of love – we feel like the track touches upon what we’re about as a band. It was the first track we sat down together and picked apart to get the most out of it, we really just wanted people to sing the words back at us! It grew from the one line “I’m not saying I don’t feel pain, Can’t say I don’t suffer bad times…”. Everyone writes about things that are close to them, it’s just our way of saying ‘S*** happens. Pick yourself up, write another song, play another show; this is rock n’ roll.’ The greats didn’t make it in a day! That intro was a decision made in the studio, as cliché as it sounds it was a last minute addition after we’d listened back through the initial mix – we all thought there was something missing. Adding the build up just seemed to be a natural thing: grab people’s attention, build the suspense and then make that first riff a real kick in the teeth!

Where and when can we catch you playing?

With this being The Midlands Rocks, we’re happy to say we’ll probably be playing somewhere near you! Our upcoming dates include:

Look out for us on the festival circuit next year too! Lots of exciting announcements in the pipeline…

You’re a young band, what challenges to do you see before you as you attempt to grow?

We’re still very wary of ‘sharks’ that may be out there, you do hear some horror stories about people being taken for a ride. So far we’ve had no issues though, we always try to build up a friendship over a ‘partnership’ with people! Funding is obviously a big thing for any band – equipment, recording, travel and food don’t come cheap but you always find a way to scrape the money together from somewhere. It can be a rollercoaster ride, some months you don’t even think about it then there are others where you’re trying to pick through the fluff and buttons in your pocket to get guitar strings or drumsticks! It’s become apparent to us as we’ve progressed that getting the right promotion behind you is a massive part of getting anywhere and so we’re always keeping our ears to the ground for any opportunities to play new cities, venues etc.

The main challenge we’re worried about is fighting off hordes of screaming girls though (we can dream can’t we?).

So what’s on the immediate horizon for THEIA?

A fair bit! Since the EP was released we’ve been playing show after show trying to build our presence on the scene; showing people that Rock N’ Roll is about the good times; about listening to new music and enjoying the whole experience… not just buying what the charts tell you is ‘hot this week’.

It seems to be working for us, it’s hard to believe THEIA II has been on the airwaves for nearly a year! The next big thing for us will be the release of our music video for ‘We’re Alive!’ which will be available on both our YouTube and Facebook pages. After that we’ve got a couple of surprises up our sleeves including some interesting new material and a couple of awesome festival slots next year! We’ll keep you guessing on those!

£3 doesn’t get you much nowadays, unless of course you’re into fast-paced, riff-driven, downright dirty hard rock… our EP’s are dripped in lashings of the past whilst still looking to the future of that mysterious temptress that is music. Listen to THEIA!