Demona is my inner self in a music-shaped glass…

Originating in Chile in 2007 and now based in Canada, one-girl speed metal band Demona has a number of releases under her bullet belt. Recently parting ways with her band members and signing with Hell Headbangers, 20 July 2015 will see Demona’s first release in two years. Here, Tanza Speed talks to MR’s Jason Guest about the upcoming EP and its recording as well as the band’s history, her influences, her experiences in both Chile and Canada, and bigotry, bullying and elitism…

Thank you very much for taking time out for this interview and congratulations on the upcoming 7” EP.

Thank you very much. I’m glad to answer your questions.

To begin, can you tell us a little about the EP? What was it that you wanted to achieve with the EP?

Well, Demona started in 2007 as a one-girl-project when I was 17, when I moved to Canada in 2011 some friends where playing live with me and soon they’ll turn in the official line-up of the band. Many things happened and we split early in 2014, so I kept playing by myself. This EP basically it’s like my rebirth… I felt I was going by the wrong path and I was desperate to come back to my original essence.

I think so… I mean, this is me, pure and simple me. The two albums Demona released were recorded as other people’s taste and control. Everything was taking a different path compared to what I originally wanted so I decided to re-take control of my own stuff. This EP shows Demona’s progression for sure, I think… 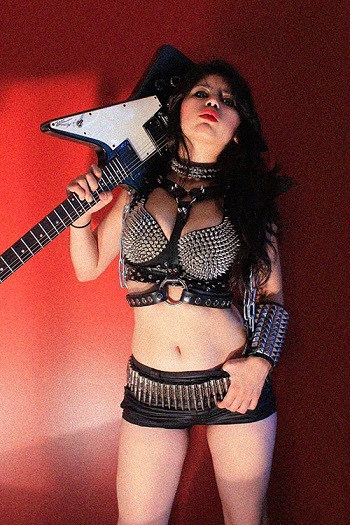 Tormentor of Desaster plays drums, Midnight live guitarist Commander Vanik helped out with the recording, and Joel Grind mastered the EP. Why did you choose to work with these people? And how did their involvement affect the EP?

So, I didn’t have any problems in recording guitars and vocals like I always do, in the same way I could always record the bass guitar without problems, but I suck on drums… Tormentor is a great friend, and has been from a while ago, and he gives me his support whenever he can. Also he likes Demona and when he knew I needed a drummer, he offered his help. I really really appreciate his support and interest in this.

I recorded the EP while I was visiting my boyfriend in Ohio, and this studio was Midlnight’s live guitarist Commandor Vanik. It was the first time I met him. He is super cool. He enjoyed Demona while I was recording completely alone with him; no one else was listening to the recording so I was really focused. After, at the end, my boyfriend arrived and we went home. I remember being so happy. Vanik was giving me his ideas and I asked him to record those ideas for me. He did it.

Joel Grind (Toxic Holocaust) mastering the EP was a lucky thing I think. HHR has his crew and they contacted him for the mixing of the EP. Was great though ‘cause he gave them his feedback, loving the band.

How did you come to work with Hells Headbangers for the release of the EP?

Just to get our readers up to speed, can you tell us what inspired you to start writing under the name Demona?

My life has been hard. When I was like fifteen I felt the need of expressing repressed feelings somehow, so I decided to learn to play guitar. It was a perfect solution. I tried to make a band with friends but nothing was taken serious; I wanted compromise and responsibility so one day, when my band split, I just dared to sing and I learnt about drum-machines… I wanted something serious so bad, but the entire scene in my region didn’t think it was a good idea having a female-fronted band, or something. Some girls were trying to make a girls’ band and they contacted me to be a guitarist, but it was a joke… I was bullied quite a lot back when I started, some people threatened me, some wished me bad, etc. People were just mean… So to answer your question, I think Demona is my inner self in a music-shaped glass. It’s like my answer to what I have/had to live. I get inspired in all what is happening around me.

I’m sure there are many but who would you say are your main influences? And how much of an impact have they had on the Demona sound?

The band has gone through many line-up changes. Do you prefer working this way or are you looking to establish a consistent line-up?

I thought I wanted a consistent line-up, but in the end who cares? I just mind we can work properly in harmony without bad energies in between.

I see that Jeff, Gabrihell and Antoine who played on your previous albums aren’t on the EP. Are they no longer playing with Demona? What prompted the split?

They haven’t been playing in Demona since May 2014. The split was because we couldn’t handle it anymore. There was a problem of chemistry with Gabrihell at the time, because he tends to be a bit dictatorial, and I tend to give everyone a chance to be part of a formal decision. It went out of my hands and I felt I was losing the band I started with a lot of effort against winds and currents. Demona was taking a path I was not happy with… Not better, not worst, just not what I wanted.

You’re originally from Chile and now live in Canada. What’s your experience of the metal scene in these two countries? And which do you prefer?

In Chile, the metal scene is really elitist… They tend to worry a lot about others, and there’s always a lot of gossiping. It’s a really macho scene, sometimes there are violent situations. They think the more metal bands you know the better it is. But on the positive side, it’s way more energetic and you can see the passion for metal in shows and gigs. In Canada, it’s colder. People are way more quiet and polite and everywhere is safe, but you can’t see that uncontrollable passion you can witness in Chile.

Has being female had any impact on your experience of the metal scene?

Oh yes, a lot. Like I told you, in Chile the scene is really macho-like. I tried to make work two bands before Demona and for one or another reason it didn’t work. Soon after I started with Demona, I self-released a promo CD to spread my music during a local show (2008) and people were laughing behind my back, and after I found my CDs broken on the floor. People did not believe in me too much, just a few ones… I had bullies around, I felt unsafe and sad all the time, but short after, when I move here, I learnt from those bad situations, and now I am a stronger person.

Are you working on more music? Can we expect a new release – an album or EP – anytime soon?

Yes I am. I am preparing the third album which I’ll record as a soloist again, and also with Tormentor’s collaboration on the drums, just like this 2015 EP. We are really excited to do this together side by side, probably in the States during winter/spring. Also under HHRs command.

Any plans for shows in 2015? Will we be seeing you in the UK anytime soon?

Haha! Let’s hope! I don’t have many plans for 2015. I’m taking a little live break during 2015 but I want to tour around during 2016, that would be perfect. Especially having my German friend collaborating with me on the drums, Europe doesn’t look impossible. I know in the States I’ll probably play, for sure.

Thanks everyone! Don’t forget to support Demona by buying the music at Hells Headbangers and if you wanna write or contact, use the links below: 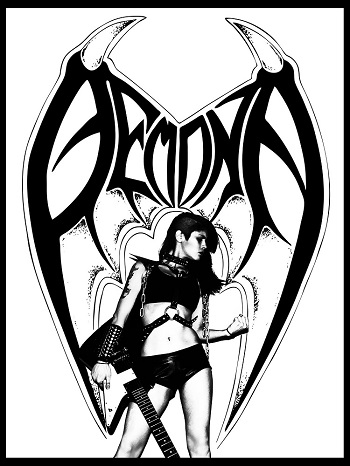