“I could be the Black Adder of hard rock!”

Hi Tagore, thanks for taking time to talk to Midlands Rocks, it’s appreciated as I know you are busy right now into your 10 date UK tour. How do you guys prepare for a tour like this?

Do you want the serious answer or the real answer…?! Well, on the serious side, we re-string our guitars, pack our bags, change drum-heads, advertise the tour, etc… But what actually happens is we forget to wash our clothes so everything stinks, we wind each other up until someone explodes, and I hide all the things Jake (Pattinson) needs for going on tour. We always forget something, and generally try not to take things too seriously! We have great fun on the road, because we’re a bunch of best friends, and we hope that comes across in our performances.

It’s a headline tour, it must feel good knowing that you are going out to your own fans…

Yes, it’s the best feeling ever! Not only getting to play to your own fans, but getting to play an hour’s set. There’s nothing worse than being on stage for 20 minutes – you’re just getting going when you have to stop! So, yes, this tour is proving to be an amazing experience for us. We’re three shows in so far, and I’m sure it’s only going to get better!

Your new album,‘Running With The Dogs’, is out now; how long have you had it ready to roll?

Let’s see… we started recording for real in the summer of 2013, and we had most of it done by the end of that summer; we just added some bonus tracks, mainly cover versions, plus two extra tracks towards the end of the year, and then the waiting game started over Christmas! Records take a lot of setting up these days, especially with an international release. Actually, one of the extra tracks we added right at the eleventh hour was ‘Don’t Get Mad Get Evil’, and there’s been a lot of positive comments made about that one… it was worth going the extra mile!

Did you do anything different this time around compared to your debut, or did you just want to repeat the formula?

Well, the producer and mixing engineer are the same (Laurie Mansworth & Tony Newton), and we pretty much kept it the same for the recording process, as we can do a lot of the basic work in our home studio in Cambridge, which makes a lot of sense. We also went into Steve Harris’ studio for recording the bass & drums, and that’s a place we’d used previously – great vibe, as you can imagine. However, we switched over to Marshall amps this time, and we used different mics, that kind of thing, so I would say the source sounds are superior. But the tears, the shouting, the tantrums, that all stayed exactly the same!

Guitarist Jake Pattinson is now a full member of the band. Did he get the chance to have input on the album or was it done and dusted before his arrival?

Unfortunately, Jake joined in November 2013 just before we began touring the UK with Airbourne, so the poor guy had an entire set to learn in a week before even thinking about anything else! The album was also done and ready to be released by the time he joined, but we can’t wait to get back into the studio to get his input on Album 3! He’s a genuinely recent recruit to the ranks – he’s not even in the videos for ‘I Bleed Rock + Roll’ and ‘Emergency’, but we’re working on a new one for ‘Running With The Dogs’, and he’s going to be in that. It’s being filmed & edited by a guy called Mikee Goodman, who is also one of the singers in legendary UK outfit SikTh.

You are obviously much more experienced in the studio now. What impact did that have on the recording of this album?

We’ve grown as people, musicians and characters since the first recordings, that’s true. I mean, Dhani (Mansworth) was only 16 when we made ‘This Might Hurt’! So everyone’s performances are better this time around, and the whole thing just came together faster and was a much more enjoyable experience. Also, we had the chance to show a different side of the band with songs like ‘Unchain My World’ and ‘Cloud Across The Sun’, and a lot of the interviewers we’ve met have commented on the diversity of the album as a whole. The Japanese media seem really excited about that side of things, and that’s a country we love. We’re hoping to get back there in April. We’ll definitely bring the acoustics!

Laurie is family, your manager, your producer, and that’s not a typical set-up. Please explain to us how that works as a creative team…

Well, ours is not a typical set-up full stop, but it works perfectly and we’re not planning to change it! You know, Laurie’s been more than family for us boys – I mean, for Dhani he literally is family, it’s his father. But for the rest of us he’s always there, too… as manager and producer, for advice and for help, and for a laugh when the time is right, that’s very important, I think. He’s played a major role in getting the band to where it is today! He’s definitely a 6th member!

You guys tour constantly, it must be nice to be taking out some new material…

Yeah, it was about time we got some new tracks in the live set! Prior to this run of shows, we’d been touring ‘This Might Hurt’ for nearly two years, so it’s been inspiring to run through some new songs in rehearsal, and playing them live has been causing chaos… in a good way! I think we had the first couple of rows onstage with us in Norwich! ‘Emergency’ and ‘The Outlaw’ have been going down especially well.

How different is it playing as a headline act to your own fans compared to a support tour like KISS or Airbourne?

Well we don’t have 40 tour buses, a travelling stage, pyro or catering… yet! But it’s coming, hopefully! It’s just two totally different ways of touring, and we enjoy them both. Going out on the big stages is amazing, and such an honour, of course, but then playing our own shows to people who know all of the words and have paid specifically to see us is a wonderful feeling, too. Looking back on it, it’s pretty amazing that a young band from the UK was selected to go out on a Kiss / Motley Crue package in the US, but we did all of the shows, and there was over 50, we survived the experience, and we made lots of US fans along the way.

Have there been any fights about what songs to include from the new album on this tour?

I’ve gotta say there wasn’t even a debate. The set we picked just came together and everyone agreed on the songs, which was a miracle! And so far, it’s been going down a storm – we just wish there wasn’t a curfew because then we’d be playing for hours… running through our own songs then breaking out the covers. Hopefully, at one of the shows, we’ll find time to slot in a cover. We’d love to have a bash at ‘The Seeker’ by The Who, which is one of the covers we included on the Deluxe physical version of the new album. Matt’s voice is perfect for the song!

Are you the type of band that will chop and change your set on a given night or do you ‘stick to the plan’?

We’ve changed bits around, yes – played different encores, that kind of thing. We even asked the crowd in Nottingham which songs they wanted to hear, so, yeah, I’d say we always chop and change depending on our mood and the mood of the crowd. Who wants everything to be the same, right?! Better to live dangerously!

It must be nice to return to the likes of Nottingham and Wolverhampton again?

YES! Nottingham was a great show. Rick was climbing up to the ceiling, Jake and I were on the bar, and Matt was somewhere in the crowd! It’s such a great rock town! It’s England’s ‘Detroit Rock City’. As for The Slade Rooms in Wolves, we’re really excited about that one. It’s just a few tickets from selling out so it’s gonna get crazy in there!

Are you playing any places you haven’t played before on this tour?

No, we’ve actually played every town on this tour in some way or another, either supporting or doing our own shows. Although I think I’m right in saying that some of the towns we’ve visited only once before.

Aside from Laurie (haha), you’re a bunch of young guys on the road. What are a couple of stories that have gone down in The Treatment folklore?

The ass tattoo that me and Ben got is always a funny one, especially as he’s left the band now! We’re going to be there to haunt him for life! Ha! Ha! Also, I fell through the stage once – not off the stage, but actually through it! It’s the one time I thought that health and safety was maybe a good idea! We all have so many stories to tell, it’s been one huge roller-coaster of stories from the get-go! And don’t get us started on the US tour… I mean, Matt had his 21st birthday over there, so, well, you can imagine! Ha! Ha! But what happens on the road, stays on the road – unless it’s on YouTube!

It’s early in 2014, and it’s going to be another big year for the The Treatment. What plans do you have lined up that you can tell us about?

We’ve got the rest of this UK tour to complete, then we’re off into Europe for some more headline shows, then back over to Japan to follow up on our Ozzfest appearance last year! I think we then have a few weeks off to do more writing and rehearsing, and to make another video, too, then it’s the Graspop festival in Belgium, with other major spring and summer events to follow, and who knows what else! Ha!

Go on, do tell the Midlands Rocks faithful something special … share some news with us that you’ve told no one else yet… this is the Home of Metal, we like to be impressed!

My name by birth is Rowan! It’s possibly the worst name ever! All it reminds me off is Rowan Atkinson and how similar our personality traits are! I could be the Black Adder of hard rock!

Thanks so much for taking time to talk to us. 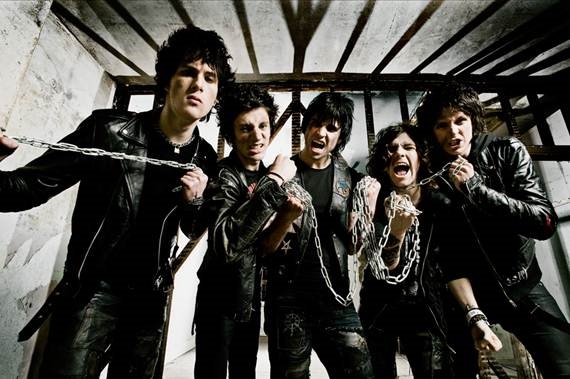