Without Maiden and Sabbath, I doubt that I’d be sitting here answering your questions…

In February 2015, five years after their first and only release, the 2010 demo Death Incarnate, Swedish death metal merchants Abscession will unleash their first full length, the long-anticipated Grave Offerings. Vocalist Thomas spoke to MR’s Jason Guest about the album and its development, the lyrics, the artwork, Dan Swanö’s involvement, the band, their history, their future, and why vinyl is killer…

Thanks for taking time out for this interview and congratulations on Grave Offerings. What was it that you wanted to achieve with the album? Did you set any goals for yourselves?

Hey Jason and thanks, it feels great that the album is finally done. What we wanted to do on Grave Offerings was to continue down the path we started on with our previous demo, Death Incarnate. But of course a full album lets us show our full capacity a lot better than a three track cassette. We never talked about the goals with this album in that sense. It’s just been clear to us that we wanted to make an album that we ourselves would listen to.

We did spend a lot of time deciding what the track list should look like, since we wanted the album to feel like a united thing. We were clear on that we wanted ‘Where Sleeping Gods Dwell’ as the opener and ‘Downfall’ as the finish, but in between there we tried a lot of variations before settling on the current track list. It may seem strange in this digital age where people make their own playlists, shuffle stuff around and even delete the tracks they don’t like on an album. But for me a good album is an entity worth listening to from start to finish, at least ten times or more before you start skipping songs (if you even have to skip songs). On this note we’re really happy that Grave Offerings will be released as a vinyl as well as CD. The vinyl really works well for those who want a full experience I think.

The basic sound of it – old school death metal – was pretty clear to us since we wanted to keep building on the sound from the demo. But we did try out a lot of different guitar sounds and re-recorded vocals and stuff several times before we were pleased. There were some technical difficulties that led to the re-recordings as well, but the end result was still a lot better than the early takes.

The lyrics range from literary themes like the Lovecraft/Cthulhu-inspired ‘Where Sleeping Gods Dwell’ to more direct 80’s slasher movie-lyrics like ‘Cabin 13’. I always try to create stories or imageries in my lyrics since that’s what I like myself. Lyrics have always been an important part of the experience for me, at least when listening to metal and similar genres. I think well written lyrics that are weaved into the general feel of the song really takes it to another level. Shitty lyrics on the other hand can really bring a track down. I know a lot of people don’t give a shit about lyrics, but I love the feeling of putting on a new album, sitting back with a glass of beer and just reading the lyrics along to the music. 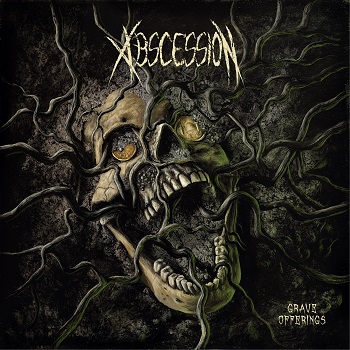 The artwork was an idea we came up with while discussing the meaning of the title Grave Offerings. We had a couple of other ideas at first but eventually decided that a recently dug up skull (from a Freshly Dug Grave, eh?) with coins in the eye sockets would be a great representation for the album. After all, the lyrics deal both with death and mythology, so why not a skull with old, bent coins for the ferryman?

Mattias Frisk designed the artwork. Why did you choose to work with him? And how much direction did you give him in its design?

We knew Mattias from before, since he did the artwork for my other band Throne of Heresy. He’s a great artist who has done work for a lot of up and coming bands like Ghost, Morbus Chron, Vampire etc. He’s also the frontman of Vanhelgd who released one of the strongest death metal albums of 2014 (Killer stuff, check them out if you have missed them). He has a good understanding of the scene and immediately knew what we wanted. Then he took our idea and made it ten times better in every way.

The album was mastered by Dan Swanö. How did you come to work with him? And what did he bring to the album?

It’s an absolute honor to have the album mastered by Swanö. We’re all big fans of his music. Edge of Sanity was actually the band that got me into death metal many years ago. We simply asked him if he would master it for us and he said yes.

I’ve known Dan personally since the late 90’s, and apart from his music, since he started mixing and mastering full time he got really good at that. It took a long time to mix this album, and when you work so long on something it is easy to lose perspective. I never outsourced mastering before and so I was a bit nervous. But in the end I was glad to have another person finalizing my mix. You can talk to Dan and tell him your wishes of what needs to be changed, and he will make it happen. His master sounded better than the one I did. He also made a special, more dynamic master for the vinyl release.

Why did you choose to work with Final Gate Records? Do you plan to stay with them for future releases?

Our old label, Suffer Productions, suggested we talk to Final Gate Records since Suffer didn’t have the resources to release this album in a proper way. So we talked to Marco at FGR and came to terms. Whether we’ll stay with them for another release depends entirely on what happens in the future. We only have a contract for Grave Offerings so far so we’ll have to see. Marco is a great guy though and the label is working hard to get our stuff out there.

Can you tell us about how Abscession formed and what it was that drew you together to make music?

It was our common interest in Swedish death metal that drew us together and made us start the band. We’ve all been in plenty of bands earlier, but I think we all felt that we had a common vision with Abscession, doing stuff like Grave Offerings.

Basically we wanted a one-word name that fit the style of the music. It’s hard these days to find good names since there are a thousand underground bands all over the world doing nothing but thinking up cool band names for themselves. We had a few ideas and tossed them around, and eventually Abscession stuck. It’s a whole hell of a lot better than “Gutslab”, which was one of the contenders…

Who would you say are the band’s main influences? What is it about those bands and their music that you find inspiring? And how much of an impact have they on the band’s musical identity?

If I would narrow it down to a handful of bands, it would be Edge of Sanity, Death, Carcass and At the Gates. Those bands all had created their own sound, almost their own genres, yet it was all called Death Metal. I think you’re always influences by the music you listen to, if you want it or not. Of course, we don’t sit there and steal riffs, but in the end Abscession might sound like a mix of all what I like about those bands.

Skaldir writes most of the guitar riffs while I write most lyrics. I think I wrote two riffs for the whole album, and Skaldir maybe wrote two lines of lyrics. So we match up pretty well. Markus of course made his magic happen on the drums; I can’t say much about his process other than that it’s amazing drumming.

Other than the general death and darkness inherent to the genre, no. We do have some anti-religious themed lyrics too, but it’s not really a main thing for us. Basically we want to create heavy music without subtracting from the melodies. We’re not a melodeath band but we do prefer to weave in melodies instead of just hammering on with complex riffage.

The band has been writing since 2009 and your only other release is the 2010 Death Incarnate demo. Five years is a long time between releases. Musically speaking, how has the band developed since then?

We all have other things going on in our lives besides Abscession, so there have been some hold-ups there. Other than that we had to redo parts for various reasons and then there’s been the hunt for a new label and now the long wait of getting the albums pressed. Apparently, printing vinyl can now take up to three months due to all vinyl-loving hipsters out there. Though I suppose one should be glad that vinyl is back on the menu since it’s a killer format.

What does the future hold for Abscession? Early days I know as the album is about to be released but is there more music in the pipeline?

Actually, we already have the outlines ready for our next album. We are interested in exploring a more epic style so we’re going in that direction on the next one. I don’t mean epic as in Dragonforce or power metal, but rather in terms of song progression. It will probably end up as a concept album too, so that’s where we’re aiming. That will probably be a one-off though, and then we’ll see what happens next. We do have some riffs written for a possible third album already but that’s so far away it’s barely worth talking about.

Unfortunately not. We’re more of a studio band right now, but if Grave Offerings is well received, who knows what might happen.

Yeah, since you’re a British zine I’d just like to take the time to bow my head in recognition of all the great metal bands coming out of Britain. Without giants like Maiden and Sabbath paving the way, I doubt that I’d be sitting here answering your questions. So long and thanks for all the metal!