With their new album Strange Creations coming in March 2019, Left Hand Man founder and lead singer Marc Plant talks to MR’s Jason Guest about the history of the band, their aspirations and influences – as well as where that name came from – and what music means to them…

To get us up to speed, can you give us some background on the band, how you formed, who you all are, and what it was that drew you together to make music under the name Left Hand Man?

We kind of just ended up as a band, almost accidently. I’d got a few ideas for songs that I wanted to record just for my own personal interest. I’d been in Lazy J for 20 years and when we decided to have a rest I really missed the writing side of things. I’m no great shakes on the guitar so I  approached Chris, who along with Nic runs Raindance Music Studio. I asked  if he would record a simple demo with me. He heard something interesting in the songs and began adding his own ideas, which then led into getting Nic involved to record drums for what would become our first EP, and to promote that EP we enlisted Ben (Wade) and Andy (Richardson) for live shows. We then decided to push on with recording our first album, which has led to our second album and the addition of Dave (Cotterill). It’s all one big group of friends making noise.

Why call yourselves Left Hand Man?

I’d like to have some mystical in-depth concept behind it, but the truth is I was on my bike signalling to turn and a car ignored me causing me to scream and gesticulate ‘left hand man’. I liked the sound of it and so did the others. The Urban Dictionary has a number of interpretations of it that I was unaware of. My own take is that the Left Hand Man (or Woman) is someone that you can depend upon to do the right thing without needing thanks or praise. I like people who show those qualities.

Is there a musical vision or concept that you have in mind for the band? And if so, how did you seek to capture that in music?

I remember when we started promoting our first album a friend asked me ‘still trying to make it then mate?’ I don’t think it was meant offensively but it did strike me because that’s the last thing I’d want our music to project. As I’ve already said, I was in a band for 20 years and kind of took it for granted. When it stopped I realised that having an artistic outlet is an important thing for me as a person. All of us in Left Hand Man are of the same mindset, I think most musicians ‘of a certain age’ are. When you are young and you start a band you have dreams of this and that but as you get older you just want to create for the sake of it, because it makes you feel better about the world. I’d always hope that people see the band as a group of creative musicians enjoying themselves.

Chris and Nic do a lot of session work in the studio playing on a wide range of projects with different styles.  They see Left Hand Man as their chance to get back to their blues rock roots, as does Ben. My influences when writing the songs are artists such as Queens of the Stone Age, Nick Cave and The Doors, stuff I would describe as on the dark side of the spectrum.

How does the band approach composition? Is it lyrics first, an idea, a melody perhaps? And how do you work to develop them?

Chris, Nic and Ben have what I would describe as a technical approach to writing (they can play instruments and understand things such as key changes) where as I have a more artistic approach (I can’t play any instrument particularly well so I use vague language to describe ideas in my head ).

The majority of early songs were things that I had written and the lads added too, and then as we came together more as a band we began writing together in rehearsals. We tend record a lot of basic demos and then take our time layering ideas.

The ideas I come up with tend to be very morose and have a swing rhythm (or so I’m told). I show them to Chris who listens with a poker face and then goes to work on making them more interesting.

With the lads together in rehearsal in tends to be very rock, riff based writing, and I try to put think of the least obvious way to attach a melody.

Chris, Nic and Ben have what I would describe as a technical approach to writing (they can play instruments and understand things such as key changes) where as I have a more artistic approach (I can’t play any instrument particularly well so I use vague language to describe ideas in my head).

I do enjoy the lyric writing aspect, I usually write early on weekend mornings with a cup of coffee and a vague idea of some aspect of life I’d like to explore. I found that most of the lyrics on the new album ended up being me in some poking fun at aspects of myself. It’s a very therapeutic pastime.

What does the act of making music mean to Left Hand Man?

Sitting in the studio trying to work out the best way to put a song together. The problem solving aspect seems to be a strong part of our process. We rarely throw a song away we just look at new ways to make it work. ‘Hourglass’ the opening song from the new album has been around since the first EP and has been re-worked in various different styles and structures (including a very strange 80’s synth influenced version). We knew we liked something about the song so we just kept chipping away until we were happy with it.

You released the ‘First World Problems’ EP released in August 2015 with your first full length, ‘The Last Things First’, in 2016. How does the Left Hand Man of the EP differ from the album?

The EP was made up of songs I had written and taken to Chris, basic acoustic guitar and vocals that I thought Chris could help me with. I remember Chris saying to me that he found them interesting, which I considered high praise, and that we could keep them stripped back and simple, or we could throw the kitchen sink at them. I was intrigued to find out what the kitchen sink would sound like.

The first album was pretty much an extension of the EP. We needed to write some songs to fill our live set so I came up with more ideas which were kicked about in rehearsals and then turned into demos. I think those songs were where we began to find ourselves as a band rather than just musicians writing together.

Are you planning your second album? What can we expect from it? What kind of progression will it mark for the band?

The second album is a complete labour of love from all concerned. We’ve took our time to craft the songs to the highest standard we can, and Chris and Nic have gone to town with the production. The process was a bit ‘one-potato, two-potato’ in that each time someone came up with an idea somebody else thought of something to go over the top of it. Lots of layers everywhere. It took some mixing!

We’ll be announcing some when we launch the album in March.

What would be the ideal setting for a Left Hand Man performance?

For me, ‘The Rails’ in Byron Bay, Australia. A small outdoor bar just off the beach. If anyone from there reads this and stumps up the airfare, we’ll play the gig for free!

Thanks for asking me to be interviewed. It’s one off the bucket list! You can find our first album on all digital download and streaming sites. The new album Strange Creations will be out in March. 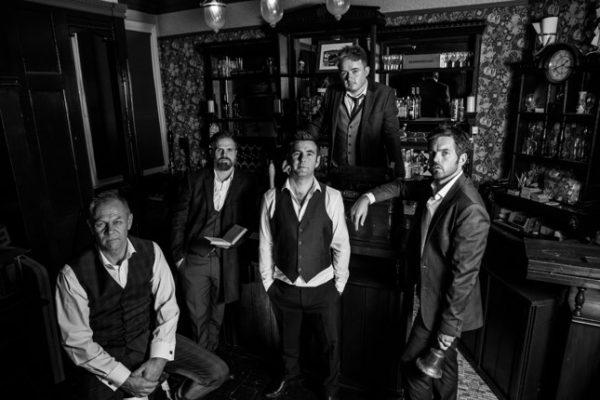