FM have not rushed since the reformation in 2007 and you haven’t oversaturated your fan base with new music and live shows. This is something that has unfortunately killed many bands who have reformed in recent times, burning them out very quickly and their fans interest disappearing just as quickly as the initial excitement of their return. Was the plan with FM to take your time and give breathing room between new albums and live shows, or just how it’s turned out?

SO:  With FM its always been about getting things right and to us the songs are the key.  At one point we thought we had finished the Rockville album but then a new batch of songs came in and because we can now control this and don’t have a record company breathing down our neck we decided to keep recording and we now feel that it was worth it with the finished result. We always want to put out the best album we can and now that we are in control we have that option to do this.

MR:  This UK tour sees the band playing far more dates than before. It had seemed the band had become a bit of an exclusive act only performing select dates. Was this done on purpose to maximise turn out and if so why have you chosen to play a more extensive tour this time at some smaller capacity venues?

SO: Agreed, FM have concentrated probably on the major towns and cities but that has only been due to venue availability and tour scheduling. This time around we wanted to try and revisit some places we haven’t covered for a while. I am so glad we did as the shows have been great.  Hopefully we will do more of this in the future as we love to play everywhere.

MR:  Personally I think its great you’re playing some places you haven’t yet since the reformation! The first time I attempted to see FM was at the Wulfrun Hall in Wolverhampton on the Dead Man’s Shoes tour, but unfortunately due to ill health I didn’t make it, so I’ve only waited 17 years for you to return to the Black Country! What can fans expect on this tour, will you be mixing the set up or should we be ready for a greatest hits set?

SO: It will be a mixture of all of the albums but it’s very hard with so many albums behind us to pick the songs that everyone wants to hear. The set changed 4 times in rehearsals for this tour!  We hope that there is something in there for everyone.

MR:  You have some quality support acts in the form of VEGA, Serpentine and It Bites, which has pleased a lot of people! You’ve actually managed to assemble a very desirable melodic rock line-up. Did the band have much say in the support acts or was this all organised by the tour manager/promoter?

SO:   We always choose our own supports and we feel it’s very important, especially in this climate, to take a good bill out on the road so that people who  don’t want to just see us also turn up for the opening acts.

MR:  I know you have knowledge of the underground AOR/Melodic Rock scene as you have released records on the Escape music label and have played the Firefest Festival twice. Had you heard of VEGA and Serpentine prior to them joining the tour and do you have any opinions on them?

SO: Yes I know both bands and I think their music is very complimentary to what we do.  It is also nice to see young bands flying the flag for this kind of music.

MR:  I’m a massive fan of VEGA so thanks for giving them the opportunity to play the good bit of the Midlands! I think most fans will be very appreciative of the line-up you have provided!

This tour is to promote your recently released album Rockville. I have to admit I didn’t like Metropolis it just didn’t resonate with me. Rockville on the other hand has blown me away and unlike Metropolis feels like FM, it follows Dead Man’s Shoe’s far more naturally than Metropolis. I know it’s all down to personal taste but this is the album I had been hoping for from you guys! Did the album turn out as you hoped and what are the tracks that stand out for you and why?

SO: It’s good to know that you’re liking Rockville Woody. We are very proud of the way the album turned out and we hope it has elements of all the best parts of FM. This album is one of the few that I have listened to in the car as I normally make a record and then move on to the next one.  I have a new favourite from the album every week, this has been the great thing about Rockville, the press and radio people have all picked on different songs instead of it being maybe 3 or 4 key tracks.

MR:  Do you feel pressure to create songs which stick within the melodic rock genre and keep traits in your sound that we have come to associate with you? I know with Metropolis the band talked a lot about moving forward musically and staying relevant to the current music climate. But with Rockville it seems like you’ve embraced your past and run with it. Was there pressure to do this, did you feel you had too? Or am I reading too much into it and it’s just how the album came together?

SO:  We never, especially now, feel pressure to do anything that we don’t believe is right for the band. We write a lot of songs and never target them at any particular sound or direction. We pick the best songs for the album once they are recorded. Obviously FM has a sound that has developed over the years so that’s what gives the songs their identity. 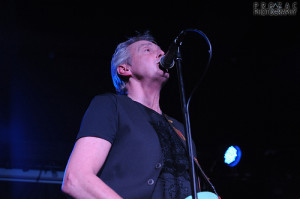 MR:  You also have a new DVD available which you recorded on the shows celebrating 25 years of Indiscreet. What inspired you to do these special shows and the accompanying DVD?

SO: To be honest I didn’t think it was a great idea but was proved wrong very quickly by the response to the shows. I didn’t realise how much this album meant to so many people and to see people in the audience in tears was incredible and very touching. It was a great nostalgic journey for both the band and the fans. We filmed two of the shows not intending to do anything with the footage at the time but the public demand was such that we looked at the footage and because there were only 3 shows and there will never be another Indiscreet show it seemed the obvious thing to do.

MR:  Also with the success of those shows do you plan to do something similar to celebrate Tough It Out or indeed any of the other FM albums in the future?

SO:  Watch this space!

MR:  There have been a lot of changes within in the media/press side of the business since the band split in 1996 till now. Do you find the industry more difficult now and how do you view the rapid rise of amateur webzine’s?

SO:  I think the change in the industry has been beneficial to all as now any artist can compete in a market that was controlled by the big corporations before. There are so many more outlets for your music to be reviewed online and get it out there to the big wide world. My only regret is that albums now seem to be more disposable and less of a possession than they were in my day (old bloke!)

MR:  Is there anything else you would like to say to the Midlands Rocks readers?

SO: Thanks for all our support over the years, it’s you that keeps us doing this.